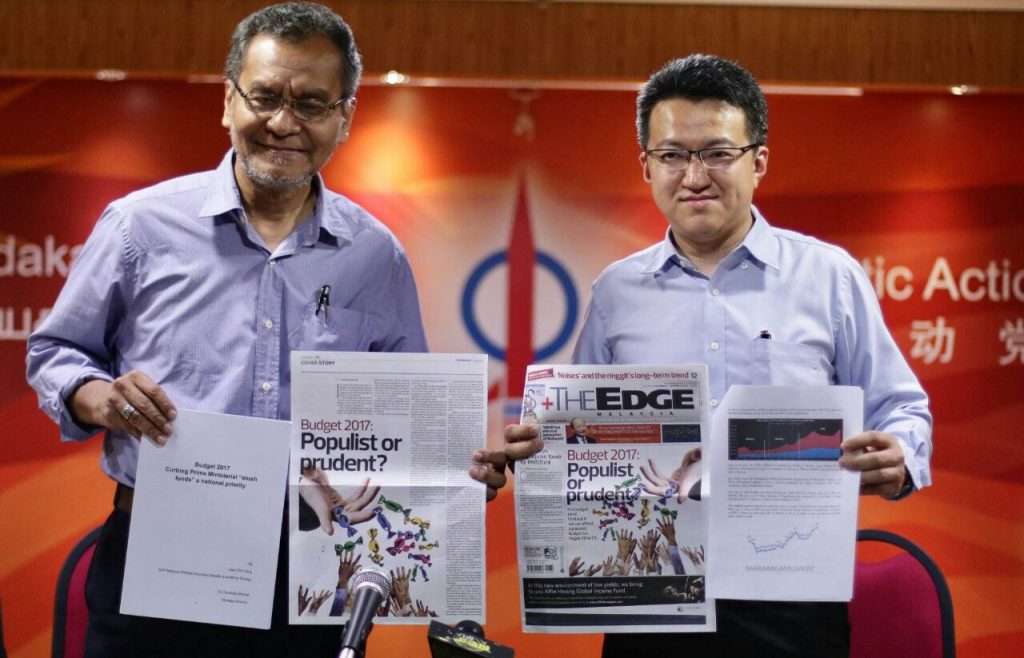 Budgeting is about making choices and setting priorities.

Budget 2017, which will be presented on 21st October 2016, is set against an increasingly difficult and slowing global economy that inevitably means less corporate taxes for the government. Oil prices plunged since October 2014 and will not return to its erstwhile levels for years if not decades, which also means a lot less oil revenue for the government.

Domestic consumption has been depressed since the introduction of Goods and Services Tax (GST), eating into the disposable income of ordinary Malaysians. At the same time, sharp depreciation of the ringgit brought an imported inflation, which further depressed domestic consumption. It is by now clear that the government is collecting less personal and corporate income taxes, as well as GST.

In short, there is going to be a shortfall in revenue and a need to make difficult choices.

Broadly, the government has the following choices:

First, raise taxes, but at the risk of irking more Malaysians and further depressing domestic consumption in an already slow-growth environment;

Third, cut spending. Two questions arise: a) if the government cut too much spending at once, the risk is that the economy may enter into sharper decline; b) what to cut and what to keep?

Choices have to be made.

We would like to present an immediate and specific “low hanging fruit”: discretional development allocation to the Prime Minister, which we otherwise call “slush funds”. Budgets 2014, 2015, 2016 allocated at least RM7 billion for such purposes. Such allocations were virtually non-existent before Dato’ Seri Najib Razak’s time as Prime Minister.

Compare to most other budget items, these discretional allocations provide scant details of their actual intents and can be utilised virtually by a stroke of pen of the Prime Minister, with very little scrutiny. It is a gross abuse of budget processes to have such items and we call for immediate abolishment of such items.

Our study does not include the budget allocation to Public Service Department, the Attorney General’s Chambers and Malaysian Anti-Corruption Commission, which broadly sit within the broader Prime Ministerial purview. Coincidentally, The Edge Financial Weekly’s Chua Sue-Ann conducted a similar study (October 3, 2016 issue). Her study included the figures for the above listed entities thus showing an even larger Prime Minister’s Department than this study.

To show a fair picture, inflation adjusted figures (2010 prices) are used. The 2015 and 2016 figures are estimates while the earlier ones are actual expenditure.

And, to be fair, the Prime Minister’s Department edifice is already large during Tun Dr. Mahathir Mohammad’s tenure, if compared to offices of Prime Ministers and Presidents in most countries.

But Najib made the Presidential Prime Ministership largest ever in Malaysia’s history. The Prime Ministerial edifice is now a threat competing for scarce resources with public education, public health and welfare.

The sharpest increase happened under the watch of Najib. Prime Minister Abdullah Badawi’s final year in office (2008) provided RM 7 billion for Prime Minister’s Department. It spiked to RM10 billion in 2009 and RM 20 billion in 2016. In other words, the figures doubled under Najib’s watch.

In Budget 2016, only 19 percent is allocated for development. But in that squeezed development budget, Prime Minister’s Department took 27.5 percent, again, at the expense of other priorities.

The Prime Minister has absolute discretionary power on how to spend the money. Each of the items involved multi-million ringgit and billion ringgit in total that details of expenditure were not avail to Member of Parliaments, let alone public. Given the fact that Parliament has had been weakened by the ruling party over the years, the expenditure of the ambiguous items are not checked nor audited by relevant authorities. Slush fund is the best description of it.

Effectively, these funds are money for the cronies. We therefore call for the abolishment of such discretional development allocations and a curb on overall spending by the Prime Minister’s Department.