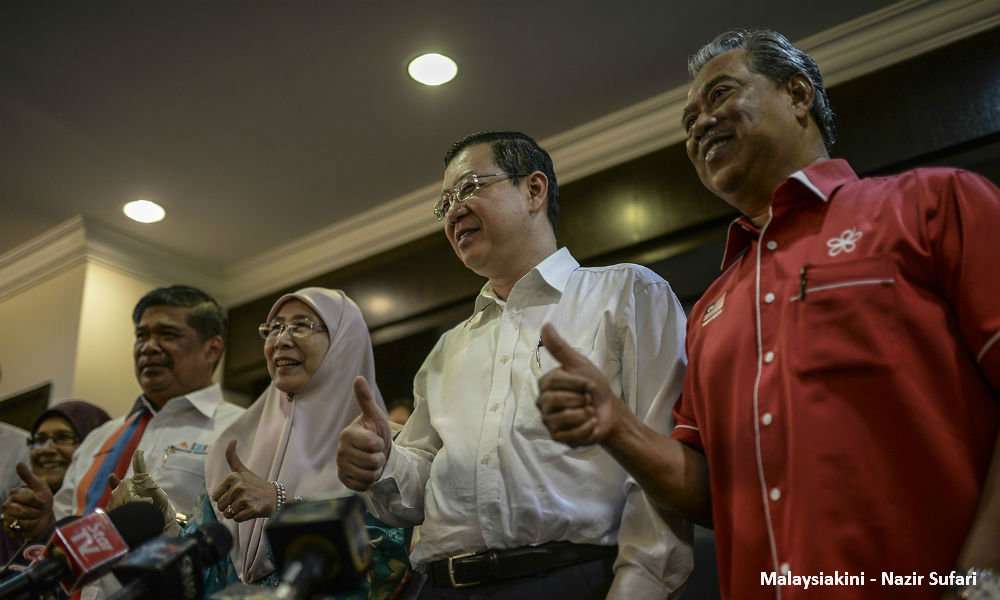 The coming together of Pakatan Harapan parties – PKR, Amanah and DAP – and Bersatu on 13th December is the first step towards foiling Prime Minister Datuk Seri Najib Razak’s attempt to win the next general election by default.

Najib’s game plan since 2013 has been to nullify the multi-ethnic opposition coalition by eliminating Datuk Seri Anwar Ibrahim as its head and co-opting Datuk Seri Hadi Awang’s PAS into UMNO’s orbit in the hope that the Opposition would then be left with no Malay giants to lead it, and would be left with only non-Malay leaders.

In that way, Najib would win by default without serious challenge from any viable alternative coalition. This is not going to happen now.

Taking a step back to look at our recent history will help us understand the context and the significance of the coming together of Pakatan Harapan and Bersatu.

In the May 2013 general election, Najib did everything he could to regain lost ground for Barisan Nasional, yet he only ended up with 47% of the votes. He fully exploited the advantages of incumbency in what is essentially a one-party state, such as an unfair electoral system, a controlled media, a state apparatus that openly campaigns for the ruling coalition etc. In hindsight, we also know now that billions of ringgit in cash were at Najib’s disposal, apart from government largesse in buying favours and support.

Yet, Najib just barely scraped through. He knew then that without a drastic reconfiguration of the political scene, UMNO–BN would not win in the next election.

If he is deemed unable to win the next general election, the UMNO machinery would then have to dump him at some point. One could argue that Tun Dr Mahathir Mohammed retired in 2003 and Tun Abdullah Badawi in 2009 because they were no longer seen to be electorally viable as leaders by the UMNO machine.

But Najib can’t just leave the scene the way Mahathir or Abdullah did. By now we know that he has more skeletons in his cupboard than just the Altantuya case – the bigger scam called 1MDB is global in effect. Any of the litany of scandals could lead to court decisions that would see Najib languishing in prison.

Malaysia is living in dangerous times because there is no turning back for its prime minister: Najib Razak will use all means available to him to stay in power.

The only way to stay in power perpetually is to destroy the former opposition coalition – Pakatan Rakyat – by coercion and co-option.

Immediately after the 2013 election, through the current Indonesian Vice President Yusof Kala, Najib offered Anwar Ibrahim “reconciliation” in the hope of wooing him to bring his party PKR into the government. Anwar turned the offer down—and eventually paid the price with his personal freedom.

Few remember that Najib’s earlier post-election slogan was “national reconciliation”. It was meant to repeat his father Tun Abdul Razak Hussein’s feat of co-opting the opposition. But of course, father and son lived in very different times.

Anwar could have chosen the easy way out especially since he knew full well that they would come after him if he rejected the offer. The opposition coalition that exists today is largely intact thanks to Anwar’s courage and readiness to sacrifice.

It was impossible for Najib to even try to entice the DAP. So that party was reserved as the racial bogeyman to be blamed for UMNO’s every failure. The charges against Lim Guan Eng and DAP’s possible de-registration can be seen in this context, of Najib attempting to destroy the DAP where possible.

Najib turned to PAS soon after the “national reconciliation” phase with Anwar ended.

Since the March 2008 election, there has always been a group in PAS members who would have preferred to form a “Unity Government” with UMNO at the state and even federal levels instead of working with PKR and DAP. The late Tok Guru Nik Abdul Aziz Nik Mat, who firmly rejected the idea of cooperating with UMNO, held them at bay numerous times between 2008 and 2013.

Since Anwar’s sacking as deputy prime minister in September 1998, two broad and opposing themes “cohabitated” in PAS. A group of PAS leaders were mainly concerned about deepening the support base in the Malay-belt states of Kelantan, Terengganu, Kedah and Perlis, while others led by the late Datuk Fadzil Noor recognised the need for PAS to expand its reach to include urban Muslims and to engage with non-Muslims.

The first group has no qualms about working with UMNO if necessary while the second group understood the need to widen the appeal of the party with the aim of defeating UMNO in elections, together with coalition partners. Also, the first group interpreted the scripture literally while the other considered the context to be vital.

In my 2004 academic thesis on PAS written at the Australian National University, I called the first group the “purists” and the second the “mainstreamers”, the latter being a Fadzil Noor catchphrase to indicate the party’s ambition of becoming a national mainstream party that could rule Malaysia in a coalition government, and not merely remaining a Kelantan/Terengganu regional party of little consequence.

In January 2013, months before the election, Hadi Awang declined to nominate Anwar as alternative Prime Minister should the Opposition win and instead hoped to install in that position Tengku Razaleigh Hamzah, who further made clear that he was only prepared to switch to the Opposition after the election.

In March 2014, the Najib government, through Minister Datuk Seri Jamil Khir initiated a major strategic shift to ally with Hadi’s faction in PAS by suggesting that the Kelantan hudud enactment could be enforced if a private member’s bill could be presented to Parliament.

It was a move to kill three birds with one stone. First, it would divide PAS internally (separate the hardliners/purists from those who wish to broaden PAS’ reach); secondly, drive a wedge between PAS on the one hand and DAP and PKR on the other; and thirdly split society along the cleavage between Muslims and non-Muslims.

The Hudud wedge is now reincarnated into the form of RUU 355 (the 355 parliamentary bill), and indeed it exhibits the dynamics and objectives of dividing the nation and cementing a UMNO-PAS de facto alliance.

The 17 years of division between the purists and the mainstreamers/ progressives since 1998 finally ended with PAS officially splitting after its muktamar in June 2015 when the progressives left the party. The muktamar also resolved to cease cooperation with DAP, effectively pronouncing the death of Pakatan Rakyat.

For those who still harbour hopes that PAS under Hadi would join hands to defeat Najib’s UMNO, it is important not to forget the upheavals since 2013 that saw Hadi’s camp preferring to back Najib than Anwar, and to work with UMNO than with other Opposition parties.

In the confused state of affairs since 2013, many have forgotten that the progressives who left PAS are the real heroes of our time, who fought against Najib’s attempt to co-opt Malay Opposition leaders into UMNO’s circle.

Parti Amanah Negara, the new home for the progressives, was formed on 16th September and in its wake, Pakatan Harapan was formed, on 22nd September 2015.

Najib’s game plan of eliminating ethnic Malay Opposition leaders through the jailing of Anwar and the co-option of PAS, leaving the Opposition with only non-Malay giants and very few credible Malay leaders, was ultimately foiled by a new split within its own ranks.

In response to mounting pressure on the question of 1MDB and the billions of ringgit in Najib’s personal account, Najib sacked Tan Sri Muhyiddin Yassin as Deputy Prime Minister and UMNO Vice President Shafie Apdal as Minister on 28th July 2015, while Datuk Seri Mukhriz Mahathir was unceremoniously removed as Menteri Besar of Kedah in February 2016.

This ultimate realignment of Malaysian politics was a glacial move. Dr. Mahathir quit UMNO on 29th February and stunned many by making a bold presence alongside DAP’s Lim Kit Siang and many former foes on 4th March 2016 to launch the Citizens’ Declaration.

Many months later, Parti Pribumi Bersatu Malaysia (Bersatu) was established in August and registered in September. The handshake between Anwar and Mahathir in a court room in September, as well as the emotional meeting of their wives (Wan Azizah and Tun Siti Hasmah) in November, were iconic moments of our time, when former foes grudgingly sought reconciliation to stop the Najib juggernaut.

Mahathir and Muhyiddin’s presence at Pakatan Harapan’s inaugural convention on 12th November was an important milestone especially when Dr Mahathir expressed his wish that Bersatu be admitted as a member of Pakatan Harapan.

It took the Opposition a long and emotional journey to foil Najib’s attempt to win the next election by default. And in that process, we must not forget the sacrifices made by Anwar Ibrahim, Lim Guan Eng, and the progressives who left PAS to form Amanah.

After the long detour, the Opposition is now back as a grand multi-ethnic coalition under strong Malay leadership and ready to challenge the newly aligned UMNO-PAS de facto coalition.

Such is the full meaning of the coming together of Pakatan Harapan parties and Bersatu on 13th December 2016.

Previous PostThe battlelines: fear vs hope; race politics vs the rise of the 99%
Next PostDeeply saddened by another fatal bus crash