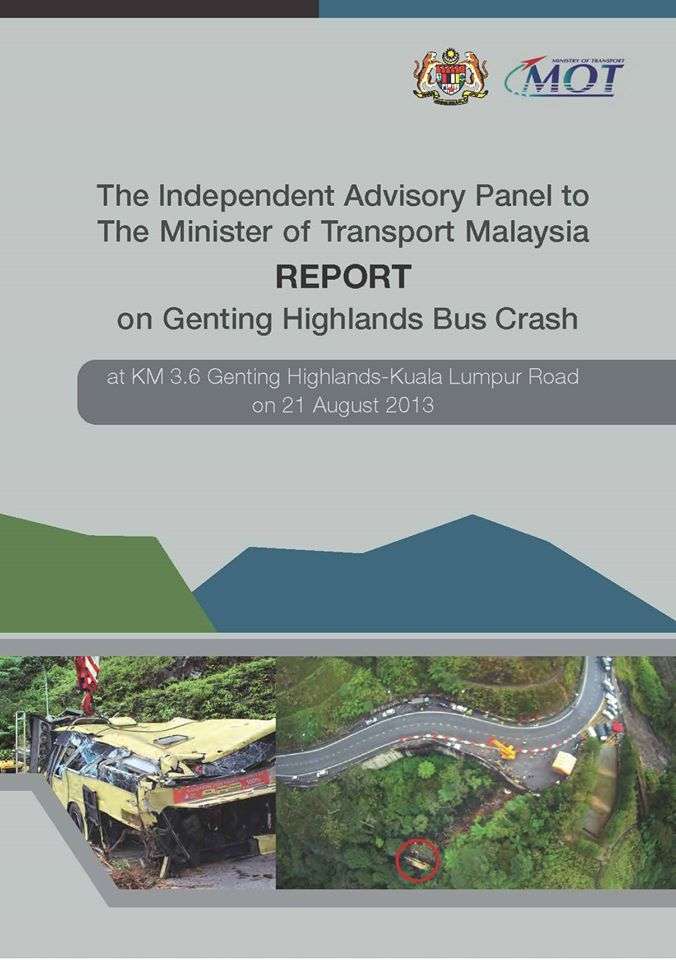 The 14 deaths of the Pagoh Bus Crash on 24th December 2016 shall not die in vain like all those involved in bus crashes before them.

Life and death is a serious matter and one that involves so many deaths should be treated more seriously than just a casual, bureacratic response.

The Report was submitted to the Minister of Transport on 28th January 2014 and made public subsequently. Most of the 51 recommendations were supposed to be carried out within a two-year time frame. But I see practically no change at all to the industry.

The Report’s damning assessments of the institutions such as Road Transport Department (JPJ), Public Works Department (JKR) and Puspakom, should warrant a major shake up but nothing happen since.

3.5.3 The Panel is deeply concerned that the top management of certain government departments and agencies failed to accord public safety as their top priority and demonstrated lackadaisical attitude towards improving road safety while performing respective functions and responsibilities. With regards to DOSH, the Panel noted that DOSH was not assuming full responsibility in managing occupational road safety and health, and instead attempting to delegate its power to other authorities.

3.5.4 There was no initiative taken by any relevant authority to gazette the posted speed limit for the purpose of enforcing over-speeding along the Genting Road. Furthermore, none of the enforcement agencies initiated such an effort, although it was claimed that numerous enforcement activities had been conducted along this road.

3.5.5 There were clear evidences on blacklisting of the Crashed Bus on the RTD’s official website. However, it was denied by the said authority stating that it might have been due to discrepancies between the RTD database and the web server. Hence, the Panel is very concerned about the poor handling of technical operation’s issue by RTD. The Panel believes such contradiction, if true as claimed, is not a coincident and an isolated case.

3.5.6 Both RTD and PUSPAKOM had poor safe keeping of documents and records. The important documents and records related to the Crashed Bus could not be produced by RTD as it was claimed that the documents were destroyed by white ants. There was no further countermeasure to retrieve the entire content or partially. As for PUSPAKOM, they only keep their detail inspection records from 2010 onwards. It was claimed that there are no means to trace the earlier inspection details, including the technical contents of any earlier approval.

3.5.7 PUSPAKOM demonstrated its lackadaisical attitude in performing vehicle inspections where unrealistic data was recorded throughout the years for the Crashed Bus. PUSPAKOM did not take any appropriate action to identify and improve such shortcomings. The Panel believes this is also not an isolated case.

3.5.8 The absence of the DG of PWD for the interview session without any notice is not acceptable by the Panel. The DG had further demonstrated his low priority and seriousness towards road safety by assigning one of the Senior Principal Assistant Directors to represent PWD, and he could not provide any clarification on important issues sought by the Panel.”

It was reported in the media that the driver involved in the Pagoh Crash had only 3 hours of sleep after he drove from Penang to Johor Bahru. Only a thorough investigation can tell if it was true but it is commonly alleged that the rather poor remuneration of the long distance bus industry encourages drivers to take up more trips, some allegedly on drugs to keep themselves awake.

4.3.5 A systematic nationwide profiling of commercial vehicle drivers is fully supported and the Panel looks forward to its early implementation. This profile is able to determine and identify the driver risk of being involved in road crash. An effective rehabilitation program shall be developed to treat such drivers before allowing them to return to the system.”

Public transport is close to my heart. We can’t just stand by and watch millions of ordinary Malaysians taking long haul buses with no guarantee of safety. The society at large won’t benefit if everyone loses confidence in the long haul bus and starts driving their private cars instead.

It pains me to see the deaths and injured of the Pagoh Crash but if nothing is done, there will just be more deaths and they could just be anyone, including our friends and loved ones.

Further, I call on the Government to do the right thing: form a Royal Commission of Inquiry with the aim of reforming the long haul bus industry from salary and health of drivers, safety of vehicles, enforcement etc.