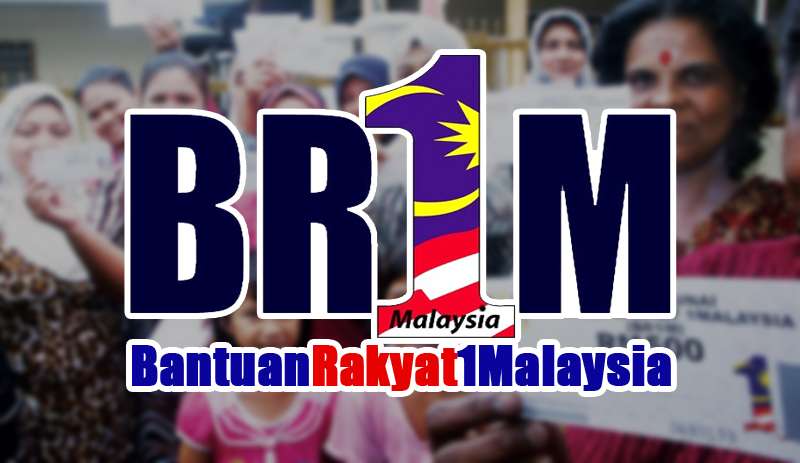 BR1M (one Malaysia assistance programme) is no substitute for holistic economic policies that improve the welfare of the bottom 60% and the overall economy. It is foolish of UMNO ministers to think that BR1M receipients do not know this.

UMNO ministers and big shots seems to think that Tun Dr Mahathir Mohamad is making a grave mistake in his comment on BR1M as a “bribe” and therefore pounced on him. Their reasoning is probably that BR1M receipients would be grateful to Prime Minister Najib Razak and the Barisan Nasional Government for the handouts and therefore would be upset if Dr Mahathir criticises BR1M.

In the initial years of BR1M before GST was introduced, BR1M contributed to UMNO’s image and also votes in the 2013 general election but it is increasingly becoming a policy of diminishing returns.

Many ordinary Malaysians now share the following viewpoints on BR1M:~

First, BR1M is public money so they will still take it but not neccesarily thanking Najib like the first two or three years.

Second, what BR1M gives is taken away by the effect of GST and increased prices of goods since 2015. So BR1M is not doing much to help households.

BR1M was actually a product of Najib’s policy-making-on-the-fly and a vulgar response to a holistic economic proposal of the then Pakatan Rakyat policy in July 2011.

The then Pakatan Rakyat Policy Committee, of which I was a member, argued that economic policies in Malaysia should anchor on enriching the bottom 60% and through which generate new impetus for the overall economy.

Since the global financial crisis in 2008, Malaysia’s export potential has been curtailed due to slower demand from Europe and United States. The country has increasingly depended on domestic consumption to grow the economy but growth heavily funded through household debts is hardly sustainable in the long run.

A more sustainable growth strategy is to reform the economy with an eye on the bottom 60% which was essentially the gist of the Pakatan Rakyat policies in 2011.

We were proposing three broad packages of economic reforms to boost the actual income as well as disposable income of the bottom 60% and therefore lift the Malaysian economy to the next level.

Handouts are no substitute for hard economic policies to create decent jobs with decent pays.

The hard question for the Malaysian economy is how to reduce dependence on unskilled foreign labour and to mechanise, automate and upgrade our industries so that less labour is needed but each of those employed are paid better.

It is the Government’s role to create a conducive policy setting for a virtuous cycle of higher productivity (through automate and upgrading), better skills and higher wage to take hold. What we have now is a perpetual vicious cycle of low productivity, low skills and low income.

The Government has a responsibility to do three things well, naming housing, public transportation and healthcare.

Most ordinary working Malaysians among the bottom 60% spend most of their income and savings on housing, transport and healthcare. If they spend less on these items but enjoy equal or even better quality of life, they would have a lot more disposable income to spend on other items to improve on their own wellbeing and in the process boost the overall economy.

The Government and GLCs should not be too interested in selling houses as developers but as a provider of decent social housing for average Malaysians. It is interesting to note that among the top private developers are government-linked corporations that are chasing profits from property development.

The Government’s role in handling transport is not to sell cars but to develop a cheap but efficient public transport system nationally, not just the “big toys” like MRT in the Klang valley, which benefits the contractors more than the users. Transport, especially the purchase and maintenance of cars, as well as fuel, is a huge component of household spending. If low income households spend less on cars and transport, it will certainly free up their disposable income on consumption.

The Government also needs to do more for healthcare. It is interesting to note that most of the private profit-oriented hospitals in Malaysia are owned by the government-linked corporations, especially through Khazanah, Sime Darby, KPJ. The dual system has drained the talent pool and quality of public hospitals and thus forced many ordinary Malaysians to pay for private medical services. It is heart wrenching to see ordinary Malaysians borrowing money to pay for medical emergencies which often take years to repay , thus draining their disposable income.

Many ordinary Malaysians, even if they are not rich, also spend generously on their children’s education in schools and on private tuition. Improving the quality of public school system so that no one feels the need to spend too much on private tuition is another area that the Government must look into.

One important policy heavy lifting that the Government has to do to generate more disposable income for the bottom 60% and hence grow the overall economy is to dismantle monopolies.

For example, research has shown that Malaysians pay more than almost all their Asian regional counterparts on internet data and mobile phone charges for the same level of service.

Monopolies and oligopolies exist in every part of our daily lives from rice to sugar to tolled roads. A good Government that acts on behalf of ordinary Malaysians should stand by the people , and not corporations. And it makes good economic sense to dismantle monopolies and oligopolies because when the bottom 60% have more disposable income in hand, they will spend in the domestic economy (and not on imported branded handbags) which benefits all.

In 2011, when the then Pakatan Rakyat Policy Committee mooted the above economic policy packages to boost the income and disposable income of the bottom 60%, Najib responded with BR1M.

Electorally, I must admit that BR1M and the “cash is king” idea worked for UMNO – Barisan Nasional in 2013 general election. But with jobs hard to come by, increased cost of living, GST and other challenges, BR1M’s political effectiveness for Najib is fading.

It’s now time to remind all Malaysians, BR1M receipients included, that handouts are no substitute for genuine, holistic and thoughtful economic policies. To be more precise, handouts can never be a substitute for dignified jobs with decent pay. And I am confident that Malaysians know this.