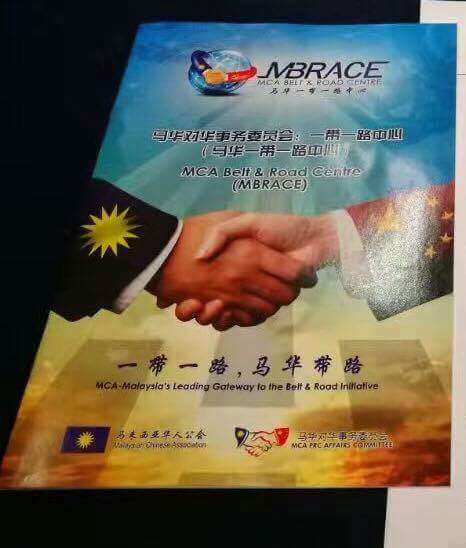 I uploaded a facebook post two days ago showing a handshake between two hands, one depicting MCA’s logo and another with China’s flag.
MCA formed a “Belt and Road Centre” and “MCA People’s Republic of China Affairs Committee” in the hope to serve as a promoter for China’s interests in Malaysia. Through this move, they presumable hope to win kudos and support from ethnic Chinese voters in Malaysia.
I am of the opinion that MCA is confused of its role and mission as a ruling party.
As a Malaysian ruling party, MCA is wrong to act as the agent for China’s interests in Malaysia.
There are Ministries of Foreign Affairs and International Trade and Industry, as well as the entire machinery of the Government at the command of the ruling parties. MCA’s role as a ruling party is to ensure that the Government agencies pursue its policies.
It is not wrong for MCA to have party-to-party relationship with political parties in China but it is against the norm to have a Malaysian political party having an “MCA People’s Republic of China Affairs Committee”, which was represented by a strange photo of a handshake between the two hands with MCA’s logo and China’s flag respectively.
MCA is also wrong to assume that China’s investment, or any foreign investment for that matter, is a straightforward solution to the economic woes in Malaysia.
What small and medium industries (SMEs) in Malaysia need is political will from the Government to help them to upgrade, add value and move up the technological ladder.
In order to make the best out of foreign investments for Malaysia, especially SMEs, foreign investors should be required to procure as much as possible locally and not import all materials from their home country. Such a policy would also ensure Malaysia’s currency is not weakened further.
To help Malaysian workers, the Government should also require foreign investors to hire as many locals as possible.
These are the tasks for a governing party like MCA and its ministers such as Wee Ka Siong, who is Minister in Prime Minister’s Department responsible for SMEs.
In his reply to my Facebook posting, Wee Ka Siong said “MCA’s efforts to promote China’s Belt and Road Initiative is crucial in helping Malaysians seize business opportunities and also to lobby for Chinese investments.”
Wee also said “the Belt and Road Initiative, if left unexplored, would result in lost opportunities. ”
It is so strange to see a government minister arguing that he needs a “MCA People’s Republic of China Affairs Committee” to do the government work of trade and investment promotion, more so to promote China’s investment.
MCA and Wee should grow up. The majority of Malaysians of all ethnic backgrounds, ethnic Chinese included, know that we are Malaysians first. They also know full well whether the investors are from China, India or Indonesia, they are foreign investors.
It seems to me that MCA and Wee are confused and also attempting to confuse the public. That we are debating such elementary differences of the roles of a governing political party and that of the government agencies responsible for foreign and investment affairs reflects the sad state of affairs in Malaysian politics.
Media statement by DAP National Political Education Director and MP for Kluang Liew Chin Tong in Kuala Lumpur on 21st January 2017

Previous PostDAP did not seek the position of Deputy Prime Minister
Next PostSpecial draws on Tuesdays: Government’s decision a disappointment