Shifting the Land Public Transport Commission to the Transport Ministry 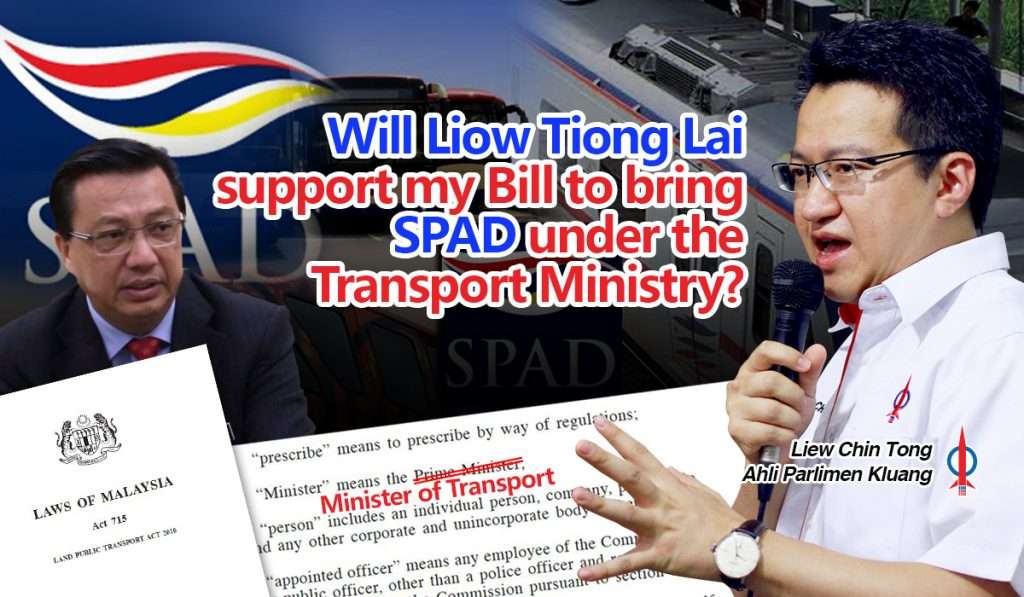 MCA President and Minister of Transport Liow Tiong Lai told a joint Chinese media interview that he is proposing to the Cabinet to bring the Land Public Transport Commission (SPAD) under the watch of the Transport Ministry.

Liow claimed that the peculiar situation of SPAD not being under the watch of the Transport Ministry happened in 2010 during the time of former MCA President Ong Tee Keat’s tenure as Transport Minister.

I was stunned to read that, because while Ong Tee Keat was Transport Minister, Liow was Health Minister. For any piece of government bill to be presented to the Parliament, the Cabinet has to first agree. Every cabinet minister is supposed to have equal weight in his opinion and to carry collective responsibility for all cabinet decisions.

To blame this on Ong Tee Keat is hugely irresponsible.

Before Liow was appointed as Transport Minister nearly 3 years ago, in a statement dated 10th June 2014, I called on Liow to set three pre-conditions before assuming the post:

“First, the Land Public Transport Commission (SPAD) must be placed under the Transport Ministry and not the Prime Minister’s Department.

When the SPAD bill was presented in Parliament in 2010, I argued that it must be placed within the Transport Ministry for greater policy coordination and the elimination of agencies’ turf wars.

When Datuk Seri Hishammuddin Hussein was appointed acting Minister of Transport (in 2013-2014), I made the same point to him both privately and in the media that whether it is UMNO or whichever party that leads the Ministry, public transport must be the most central component of the Ministry’s policy tools to provide safe, convenient and efficient transport solutions for all Malaysians.

The Genting Crash Report – thus far the most authoritative document on the ills of Malaysia’s long distance buses and coaches – strongly recommended the withdrawal of monopoly of vehicle inspection given to Puspakom, a subsidiary of DRB-Hicom Bhd. The company was given its second 15-year concession in 2009 but in light of the Genting Crash Report, the new Transport Minister must be given powers to act to protect the interests of all Malaysians against cronies.

Without such powers, the Transport ministerial portfolio is not a meaningful one.”

I am not sure what prompted Liow’s belated acknowledgement that moving SPAD to the Transport Ministry is a worthy agenda.

But Liow also told the Chinese media joint interview that it would take awhile to realise the proposal as it involves changing the laws governing SPAD.

Let me advise Liow that all it takes is political will and a simple amendment in the March Parliament session, so that by April SPAD can be under the purview of the Transport Ministry.

In the Land Public Transport Commission Act 2010, the “Minister” was referred to in many instances. But Clause 2 or the “Interpretation” section stipulates that the “Minister means the Prime Minister”.

It just takes a simple bill to amend Clause 2 in Parliament to “Minister means the Minister of Transport” to complete the exercise of placing SPAD under the watch of the Transport Ministry .

So if Liow is serious, let’s do this in the March session of Parliament.

If Liow fails to get Cabinet to agree to amend the bill, he should at least declare MCA’s support for my bill.