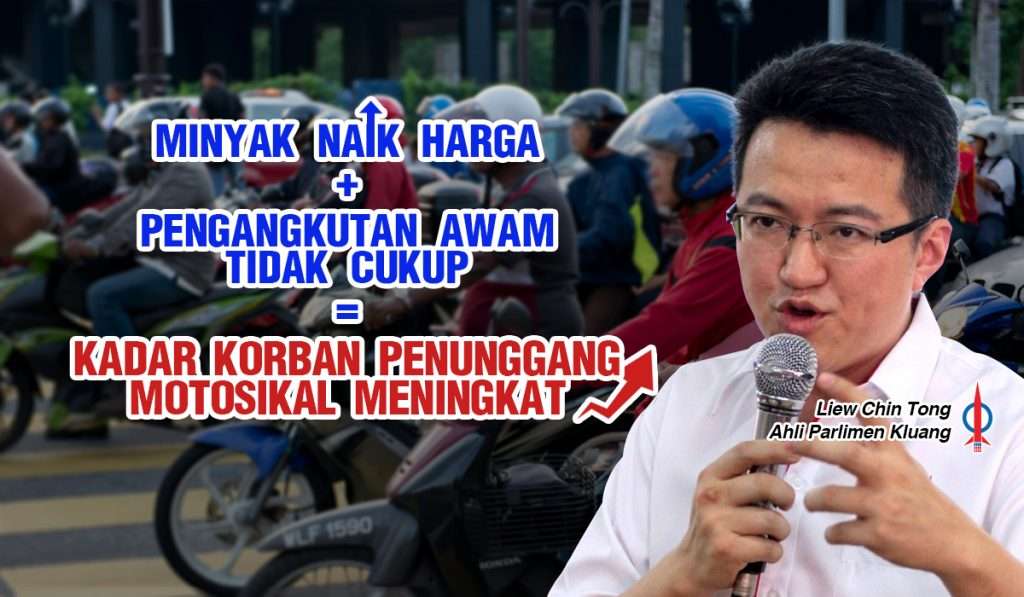 The government’s decision to increase the petrol price by another 20 cents on February 1, after a 20 cents increase on January 1, is an appalling move with huge economic and human costs and consequences. In particular, I have argued before that such a move has been known to cause more motorcycle deaths.

What concerns me the most is that without accessible public transport nationwide, we will see more motorcycle deaths in the months to come.

Research has shown that motorcycle fatalities shot up as a result of the March 2006 and June 2008 fuel hikes as the lower income group switched transport modes from cars to motorcycles. People do this to save cost, and we know our economy is getting worse by the day.

Every traffic accident is a tragedy, but such unnecessary deaths can be avoided if we have a good and decent public transportation system.

In countries where public transport services are adequately and efficiently provided, petrol price increase will encourage private car drivers to switch to public transport, instead of resorting to motorcycles.

While our LRT and MRT services may be seen as a part of the public transport system, it is not the right solution.

The multi-billion ringgit LRT extension lines and new MRT projects are essentially mega projects designed to feed the big construction lobby rather than to improve public transport throughout the country. These big projects are not economically viable and affordable for towns and areas outside major cities.

These infrastructures are concentrated in the Klang Valley. Meanwhile, public transportation has not improved in the states and regions outside this area. Even in the Klang Valley, reports have shown that the LRT extension lines and MRT projects have not reduced traffic congestion and has not led to massive switches of transport modes due to expensive fares and lack of the last mile connection – huge rail-based infrastructures were built without proper feeder bus systems.

It is time for the people to demand for a massive increase of bus services throughout the country. Bus is the most affordable mode of public transport, and if planned and run properly, it will be the cheapest and fastest way to improve tge public transport network for the largest number of people in the widest areas possible.

To make this a reality we can’t escape from implementing institutional reforms.

First, the Land Public Transport Commission (SPAD) should be placed under the Transport Ministry to make improvements to public transport the most important political and policy agenda of the Minister and his ministry.

Third, local authorities should be tasked to ensure that all planning of cities and townships are given priority to bus-based public transport to make public transport highly accessible, affordable and viable.

It is farcical to see some UMNO leaders paying for free petrol for motorcyclists, as if they are on some guilt trip.

I can understand and support any Opposition leaders paying for free petrol for motorcyclists as it is a sign of solidarity with them. But for UMNO leaders to do so, it is an oxymoronic move as it is their government that imposed the double petrol hike in less than two months this year.

I also called on Prime Minister and Finance Minister Najib Razak to immediately disclose the petrol and diesel price mechanism to show transparency.

As DAP MP for PJ Utara Tony Pua competently had shown us, there is no basis at all to the latest petrol hike. This hidden “dirty float” mechanism should end with the government making all details public.

Those in power must remember that each fuel hike exercise means more deaths on the road, especially for the lower income motorcyclists.