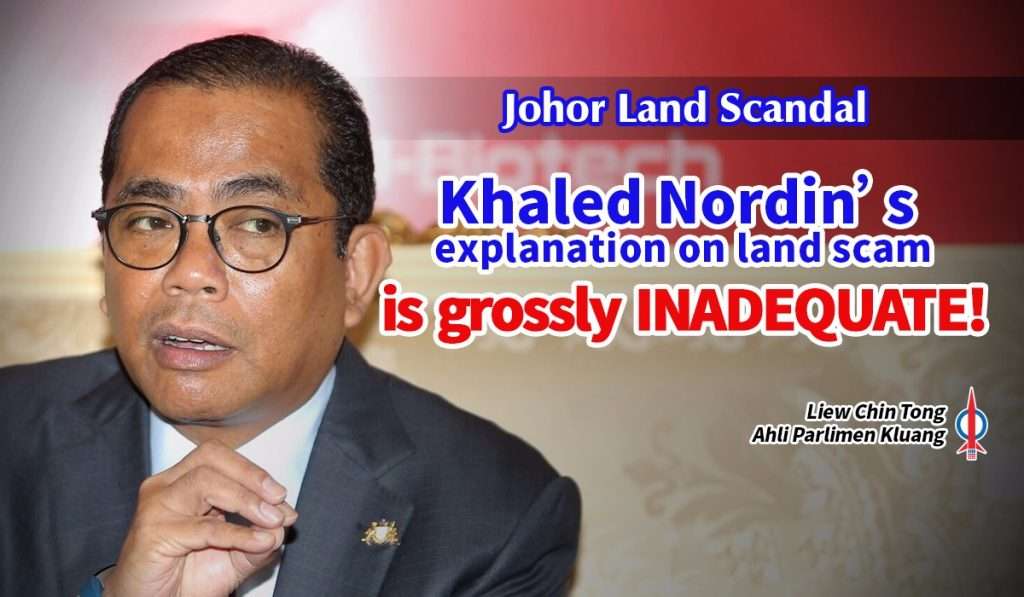 After a long silence on the expose of the Johor land scam, Menteri Besar Khaled Nordin finally attempted to provide an explanation. However it sounded more like an excuse rather than serious reasons.

According to Khaled, since 2013, developers are allowed to apply for the conversion of Bumiputera housing lots by making a 7.5 percent contribution – or half of the 15 percent Bumiputera lot discount – to the state, with projects prior to 2013, eligible for lower payments.

The contributions or collections acquired through payments to convert the lots and release the Bumiputera status are then channeled to a Bumiputera Housing Fund.

Khaled said the fund, which has amassed RM600 million since 2013, will then be used by the state for pro-Bumiputera projects such as acquiring land for affordable housing, and building up bumiputera shop lots.

Khaled’s explanation is grossly inadequate. He failed to explain the real issues.

The public expects the Johor State Government to commit to a thorough investigation, and to account for the land scandal in an open manner, which includes having an independent audit of the conversion of Bumiputera units since 2013.

There are so many questions to be answered. Was those investigated by the MACC were just a tip of the iceberg? The State Government has collected RM600 million from the scheme, which is a substantial amount; could there be more abuses?

I call on Khaled Nordin as the Menteri Besar to commit to explaining the issue to the State Assembly of Johor on 9th March 2017, either through a White Paper or to allow a debate of the Emergency Motion by DAP State Assemblyman for Pekan Nenas Yeo Tun Siong, endorsed by Johor Opposition Leader Gan Peck Cheng, on the subject.

The people of Johor deserve a very sincere and truthful explanation.