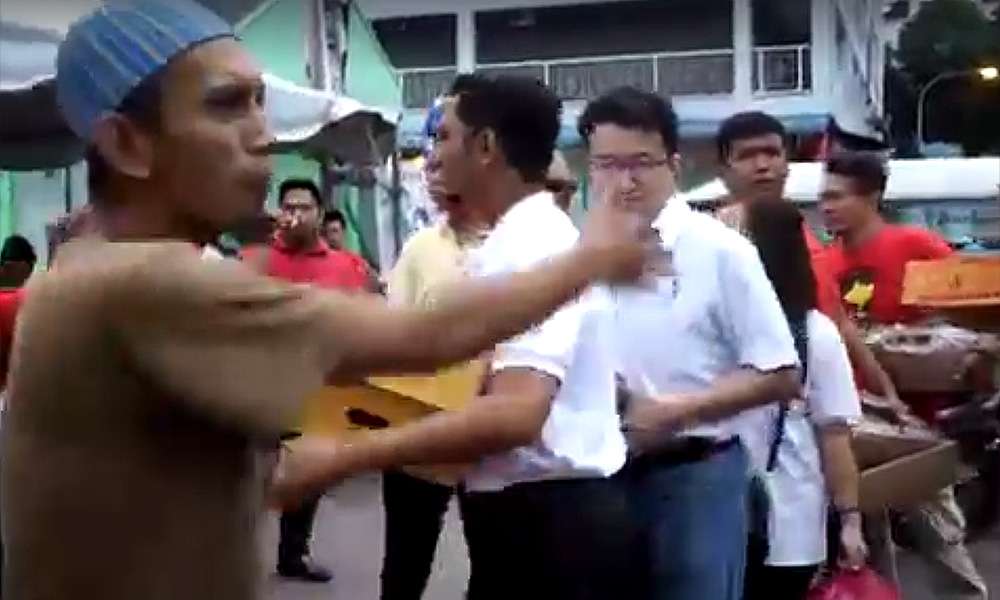 A group of thugs attacked Pakatan Harapan Kluang entourage recently. I was part of that entourage. We were attacked. Now Johor UMNO leaders are putting blame on me and the DAP. It is so ridiculous.

Jais and Razali claimed that we deserved the violence at Kluang town’s bazaar Ramadan because the traders there had long memory of DAP’s alleged intention to shut down the bazaar in 2007.

Razali also claimed that I was forewarned not to visit the bazaar, and I courted trouble myself to insist on visiting.
These are lies. Such an attitude also reflects UMNO’s tendency towards violent behaviour.

The facts and the truth

The 10th June incident in Kluang has generated huge attention nationally. For instance, as of 11a.m. on 13th June, video of the incident on DAP Malaysia Facebook page generated 897,000 views and 1.3 million views on a page called “Wartawan Jalanan”. It is safe to estimate that at least 5 million Malaysians were made aware of the incident through social media and conventional media.

Most who commented on social media express outage at such violence behaviours and felt ashamed of such hostility which shall not be part of Malaysia’s culture. Over the past three days since the incident, many Muslims in Kluang and other towns in Johor which I visit came forward to express their solidarity with me, and their disgust at the culprits.
At the heart of the issue are the violence and the attempt to block elected opposition leaders from accessing public space.

Malaysians can judge for themselves from what they saw. But, sadly, Jais and Razali chose to defend the indefensible. They should not insult the intelligence of Malaysians.

The claim that DAP had intention to shut down the bazaar in 2007 was a vicious lie.
I moved to Kluang to contest in 2013, and therefore not had knowledge of what had happened erstwhile. It took me sometime to go through media archive as well as consult locals who might know what Jais and Razali were referring to.

Even with a Member of Parliament and a State Assemblyman (for Mengkibol) since 2013, the Johor State Government or Kluang Municipal Council had never consulted DAP on any of their actions, let alone taking order from DAP to shut down a bazaar.

To expose the lies of Jais and Razali, the truth is, in 2007, DAP did not even have a single representation in elected position in Johor. DAP only won the parliamentary seat of Bakri and four state seats in 2008.

It was actually MCA…

What actually happened was that the then MCA State Assemblyman for Mengkibol, Gan Peng Sieu, had led a protest against the town bazaar, and made representations to the then District Officer.

I am stunned that Jais and Razali can confuse MCA with DAP. Just in case they have forgotten, let me remind them that MCA is a component party of Barisan Nasional, and it is UMNO’s close partner. Whereas DAP is a member of Pakatan Harapan. I hope they don’t make the same mistake again.

The bazaar is a public space and everyone should be allowed to visit without hindrance. The Pakatan Harapan Kluang entourage had no problem distributing dates and meeting people at the food section of the town’s bazaar. It was only when we approached the dry section that we were faced with UMNO thugs.
There was no warning to me prior to the incident, and even if there was such threat of violence, it should be denounced by all peace loving Malaysians.

I was blocked by the same person in July 2014 at the same bazaar when he asked me for “letter of permission” (“mana surat”) to enter the bazaar. I am told that he is a keen supporter of Jais. Had Jais taken a principled stand in 2014, the 2017 incident would have been avoided. In 2014, Jais refused to condemn the incident.

In both instances in 2014 and 2017, UMNO Youth Chief Khairy Jamaluddin denounced the acts. In 2014, Khairy sent the then Johor UMNO Deputy Youth Chief Khairul Anwar to conduct a joint visit with me to distribute dates and bubur lambuk to show that Ramadan is a month of peace and bazaar Ramadan is a site of national unity. I commend Khairy’s consistent stance on this.

Apart from being barred by UMNO thugs in Kluang, I was also refused entrance twice, in November 2013 and November 2015, to the Deepavali bazar in Kluang, as well as being roughed up at Pasar Borneo in Pasir Gudang by UMNO thugs in July 2015.
The DAP and myself strongly believe in engaging with all communities and we will not cowed by a violent acts of a small group of thugs.

We will continue spread our message of goodwill and national unity as it is our creed and what defines us as a progressive political force.