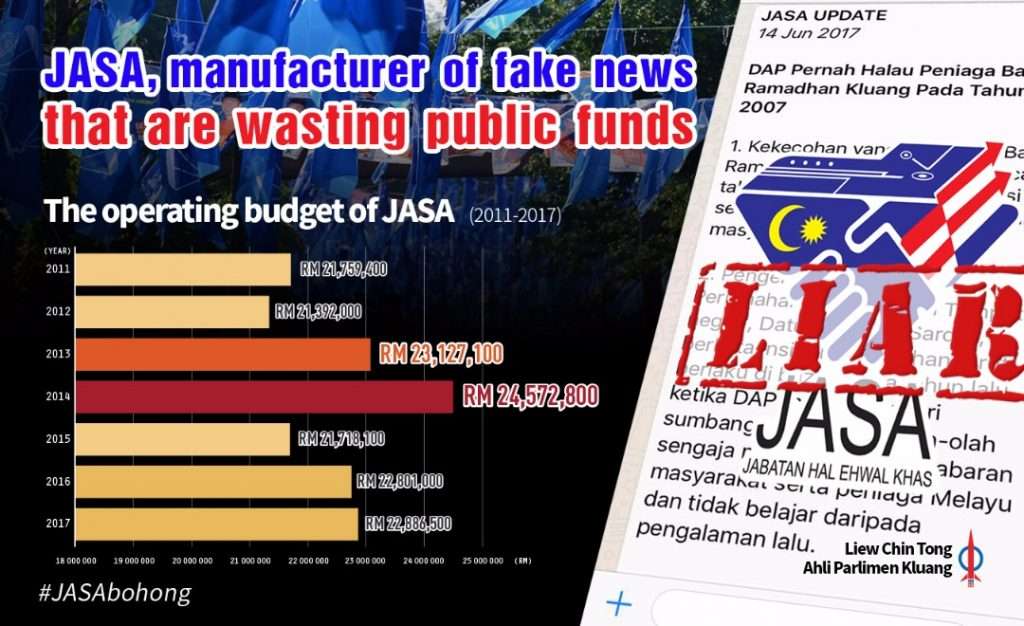 Yesterday, the Department of Special Affairs (JASA) issued an update through its whatsapp channel where it repeated a false accusation of Johor State Exco Jais Sarday, which had been disproven by MCA Kluang Chairman Gan Ping Sieu’s admission to the press earlier.

The JASA update purportedly stated that the real reason why the Pakatan Harapan delegation and I had been attacked at the Ramadan bazaar on 10 June, was because back in 2007, DAP had protested and called for the bazaar site to be moved.

This is not true. Even former MCA’s former Mengkibol Assemblyman Gan Ping Sieu had admitted as much in his statement to the press where he said,

“In 2007, it was my duty as an Adun (state assemblyperson) to voice the legitimate concerns of traders in the town (Kluang), on the suitability of the venue and what are the alternative venues available for bazaar Ramadan.”

Hence, the allegations in JASA’s update are completely untrue and bear elements of bad faith. That UMNO could use the propaganda machinery of the government to facilitate false accusations and perpetuate falsehood against its political rivals, shows the classless depths to which its abuse of power has reached.

Such lies being peddled are making a mockery of JASA’s motto,  `Kebenaran Terserlah Negara Cemerlang`.  I call upon Communications and Multimedia Minister Salleh Said Keruak to instruct JASA which is under the purview of his ministry to stop circulating fake news as fodder for political accusations.

JASA is tasked to provide accurate information to the public, and is given an annual operating budget exceeding RM20 million. It should be noted that the budget during the year before and after the general election (2013 and 2014) are higher than other years.

The operating budget of JASA in the recent years are as follows:

It is unfortunate that millions of ringgit in national funds is used to spread fake news, while at the same time the government sees it fit to cut allocations for public interest sectors such as education and healthcare. The massive budget cuts in those sectors have directly impacted the delivery of public goods, and are arguably more worthy of the funds allocated.

If it is being used in such a manner, JASA does not benefit the people but only serves the political purposes of BN. Such department should be abolished in order to trim unnecessary expenses, so that the government can spend more on the matters that really benefit the ordinary people, including education, healthcare, and public transport.