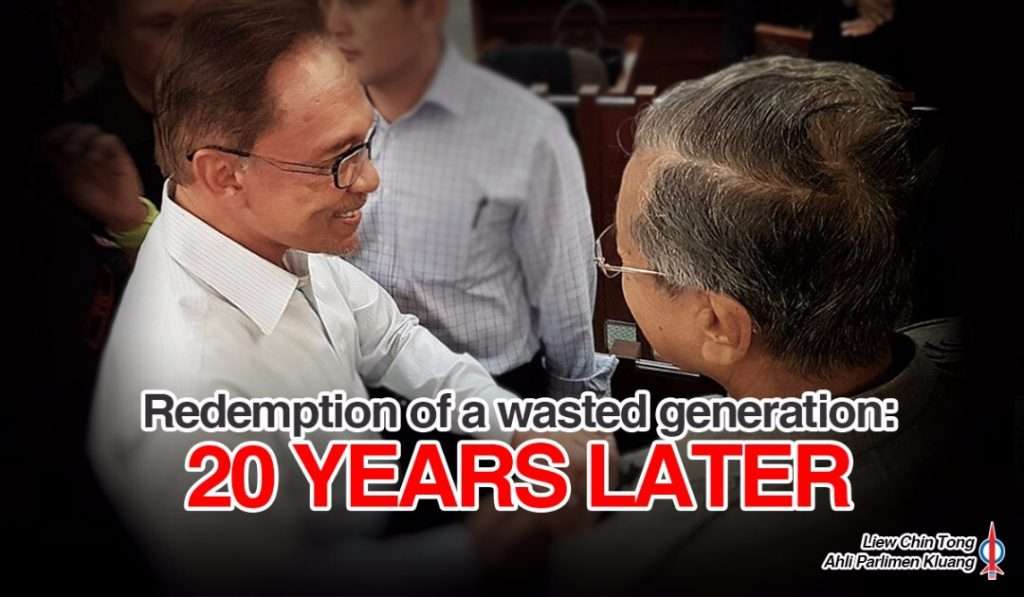 On this day twenty years ago, 2nd July 1997, the Thai baht was attacked. It set off the Asian Financial Crisis. I was twenty in 1997 and I am turning forty at the end of this year.

In 1997, I had no idea how twenty years would feel like. Now I know. And for a nation which has stagnated throughout the adult years of my generation, it has not been pleasant.

Back then, I was a student at a private college in Klang, Selangor pursuing an American credit transfer degree programme in the hope to further my education in the United States. The year started with ringgit at 2.5 to a dollar but fell to the low of 4.9 to a dollar in January 1998.

By August 1997, when the attacks spread from Thailand to Malaysia, Indonesia and South Korea, college mates who were leaving for United States for the fall intake in September were scrambling to exchange their ringgit to dollars before the currency value slid any further.

One September morning, a course mate who was reasonably well-off suddenly cried non-stop during a class presentation. He told the class his father had lost the family’s fortune just the previous week, he had never experienced poverty until then. I had not seen him since.

Fortunes built from decades of hard work and proceeds from currency speculation in the 1990s were wiped out within months, if not days, in the first major contagious regional crisis in recent memory, before the far greater global crisis in 2008.

Mahathir and his political son Anwar

Our generation was not supposed to start off our adulthood this way. Like most people during that time, we were not exempted from the influence of the powerful ideas of Vision 2020 and Bangsa Malaysia. In my valedictorian’s speech on behalf of the class of ’95, I was praising the seemingly perfect timing of my generation which I thought would mean decades of prosperity and wellbeing for Malaysia and the region.

Not only young graduates were feeling hopeful of their prospects. During the boom years between 1989 and 1997, many Malaysians who left the country in the 1970s and 1980s returned to search for opportunities at home.

On 1st May 1997, the then Prime Minister Dr. Mahathir Mohamad anointed his deputy Anwar Ibrahim as Acting Prime Minister for two months, which was billed as an “apprentice” period to pave the way for the latter to take over when the time was right.

It was perhaps the best moment of Malaysia’s history in the past sixty years: the competent but authoritarian leader Dr. Mahathir was visibly winding down in favour of his political son Anwar who was seen as the more open-minded, consensual and progressive leader.

The general wisdom of the time was that Malaysians had traded freedom for prosperity under Mahathir, whereas Anwar was promising to continue the prosperity while gradually loosening our society from its fears and shackles.

From hope to despair

Between assuming the premiership on 16th July 1981 and the Operasi Lalang mass arrests on 27th October 1987, Mahathir was seen as a modernising force. Some even thought he could be a democratic leader, especially in the early stages of his administration when many of those arrested under the notorious Internal Security Act in the 1960s and 1970s were released at once. Certainly, when Mahathir started as PM in 1981, there was a sense of a break with the past.

Between the UMNO election in April 1987 when Mahathir won against rival Tengku Razaleigh Hamzah with a mere 43 votes (out of about 2,500 votes) and the October 1990 general election, Mahathir’s authority was severely challenged within and outside UMNO. One of the serious challenges was the formation of Semangat ’46 and its electoral alliances with other opposition parties.

Between the 1990 and 1997, after defeating the opposition, Mahathir totally transformed the perception towards him through a bold proclamation of the national objective to become a developed nation in 2020 and the need to provide for a common destiny in a multiethnic society – Bangsa Malaysia – and delivered massive growth hitherto unheard of. It was the era of trickle-down economics.

The rivalry between Mahathir and Anwar was felt as soon as Mahathir returned to the country from his two-month sabbatical as they differed vastly on how to approach the crisis. From the question of whether currency speculator George Soros triggered the crisis to interest rates to bailouts, the pro-Mahathir and pro-Anwar camps battled on each policy front to no end.

During his two-month stint as acting premier, Anwar pushed for the amendments of the Anti-Corruption Act which gave the agency more power. The move was interpreted by Mahathir’s allies as an attempt to target them, which triggered a black operation to remove Anwar.

Mahathir and the late Indonesian President Suharto were in Cairo, Egypt, for a summit in May 1998, a week before the latter was forced out on 21st May. The fall of Suharto shocked Mahathir immensely. Being a maverick of sort, Mahathir had never enjoyed a strong base within UMNO and constantly had to balance different groups against each other to stay afloat on top of them. It was natural for Mahathir to envy Suharto’s iron grip over Indonesia.

By then, Mahathir saw his political son Anwar ready to take him on and destroy his legacy.

However, Anwar was not fully prepared to challenge Mahathir. At the UMNO general assembly in June 1998, the then UMNO Youth Chief Zahid Hamidi was forced by Anwar to delete seven paragraphs from his speech which was supposed to be the first salvo against Mahathir. According to South Korean scholar Hwang Inwon, an expert of Malaysian politics, one of Anwar’s close confidants described the former deputy prime minister as a person who lacked the killer’s instinct and missed that particular moment of attack.

Mahathir fought back and encircled Anwar. By September 1998, Anwar was politically gone, in the most tragic manner.

I read history with a sigh. Had Anwar challenged Mahathir in June 1998, he could have won. Or at least he would not have been isolated.

But what had happened cannot be reversed. While the nation stagnated economically and Malaysians became less hopeful, Malaysia saw tremendous change politically in the intervening years.

I would not have entered full-time politics at such a young age if not for the inspiration from Anwar’s Reformasi movement. Anwar could have chosen to fade away like Musa Hitam – Mahathir’s first deputy prime minister – a decade earlier. But Anwar chose to resist and fight on.

The impact of Anwar’s struggle was finally felt electorally in the 2008 and 2013 general elections which saw both sides almost equal in terms of votes received.

The irony of fate

History has an ironic twist. Now Mahathir is fighting against Najib Razak – once his  favourite successor post-Anwar. Now Mahathir is aligning himself with the Opposition coalition which was birthed very much a result of the Reformasi movement that fought him nearly two decades ago.

Without Anwar’s persistence since 1998, Mahathir would not have a formidable Opposition coalition to turn to when he quit UMNO to form Bersatu in 2016.

At the same time, the incarcerated Anwar and his party needed the momentum and additional support from Mahathir’s nascent opposition movement as the support for the original Opposition led by Anwar had peaked in the 2013 election.

Both are formidable and both fought ceaselessly, not hindered by prison (in the case of Anwar) or old age (Mahathir). In fact, Mahathir, Anwar, and with Lim Kit Siang, have shaped Malaysian politics for the past fifty years.

Their historic coming together to fight Najib and UMNO is so unthinkable, yet it is a reality for all to see.

History presented both Mahathir and Anwar an unusual and rare challenge. They have to come together and reconcile genuinely, otherwise defeating UMNO and Najib are just illusive dreams.

Two decades ago, triggered by the Asian Financial Crisis, Mahathir and Anwar parted ways and the nation has been sliding ever since. The consequence of a broken nation on the lives of a wasted generation is keenly felt.

Malaysia is at a historic juncture. The forces aligned to Mahathir and Anwar have to reconcile to give change a serious shot and give hope.

Let us pray and hope that we can rebuild this beautiful nation, starting with Malaysia’s first change of government since independence in the upcoming general election.

I believe Malaysia has found her redemption. We, the wasted generation owe it to the current and future generation. The time for change is now.  It is the time for a new government.