Opposition targets to win Johor through a groundswell 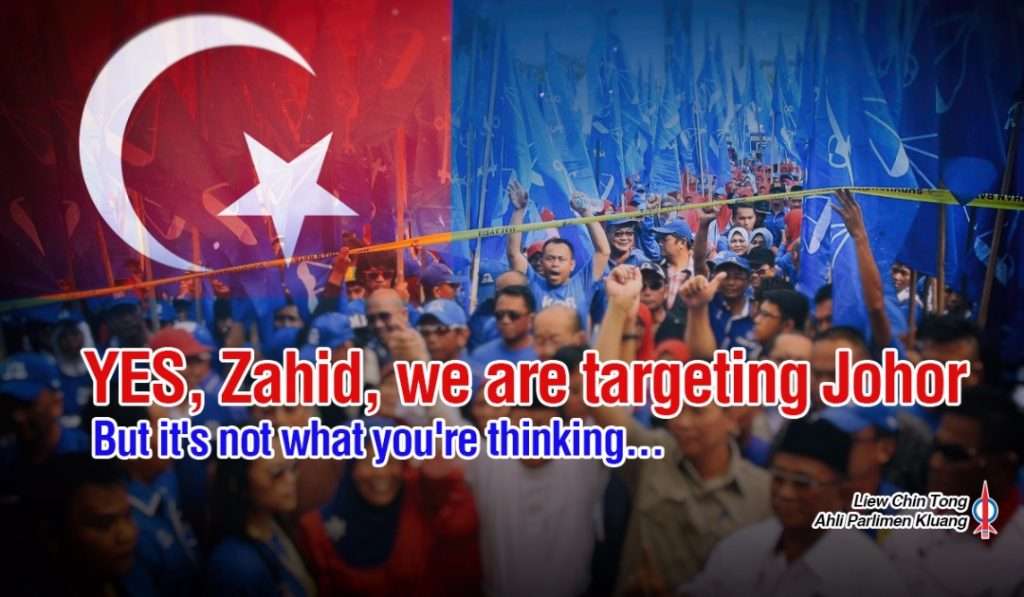 Pakatan Harapan is definitely seeing Johor as one of the most important battlegrounds in the upcoming general election and hopefully a groundswell will see the change of government at Nusajaya, as well as Putrajaya.

The Opposition will do our best to win by fighting fair. We will not engage in illegal means of moving voters, which is a standard operating procedure in Barisan Nasional’s playbook.

Deputy Prime Minister and Home Minister Zahid Hamidi claimed in Negeri Sembilan yesterday that the Opposition was targeting to win state power in Johor by moving voters into Johor.

Besides Kedah and Sabah, Johor is also part of the three frontline states which would contribute 10 parliamentary seats each to the Opposition’s tally and thus send UMNO and Barisan Nasional to the Opposition bench after the 14th General Election.

For Parliamentary seats, Labis, Segamat, Ledang, Sekijang and Muar in northern Johor, and Pasir Gudang, Pulai, Tebrau, Johor Bahru in Southern Johor are marginal seats that could fall easily with a small swing. Parti Bersatu should also be able to retain Pagoh for Pakatan Harapan.

When the surge among Malay voters in favor of the Opposition is sufficiently strong, Simpang Renggam, Tanjong Piai and Ayer Hitam are next in line to fall.

For State seats, the Opposition had won 18 state seats out of 56 in the 13th General Election. The seat of Jorak is now considered an Opposition seat after the formation of Parti Bersatu. To form the State Government, 29 seats are required. It is just ten seats away, assuming we are returned in all the existing seats.

While Zahid is right in saying we are targeting Johor, he was dead wrong in alleging that the Opposition is involved in shifting voters.

Shifting voters across seats and states, gerrymandering boundaries and other dirty tricks are the standard procedures of Barisan Nasional’s playbook. Such tricks can only be done by the respective authorities, and, more importantly, this is not the kind of democracy we champion.

To us, democracy means voters are given choices and the right to choose the best government available, without fear or favour.

We know that the voters of Johor value such form of democracy and they are ready for change. Johor is certainly the frontline state for the Opposition in the hope to herald a genuine democracy for Malaysia.

Previous PostOur year of living dangerously
Next PostJohor: from UMNO’s stronghold to its battleground for survival