Johor: from UMNO’s stronghold to its battleground for survival 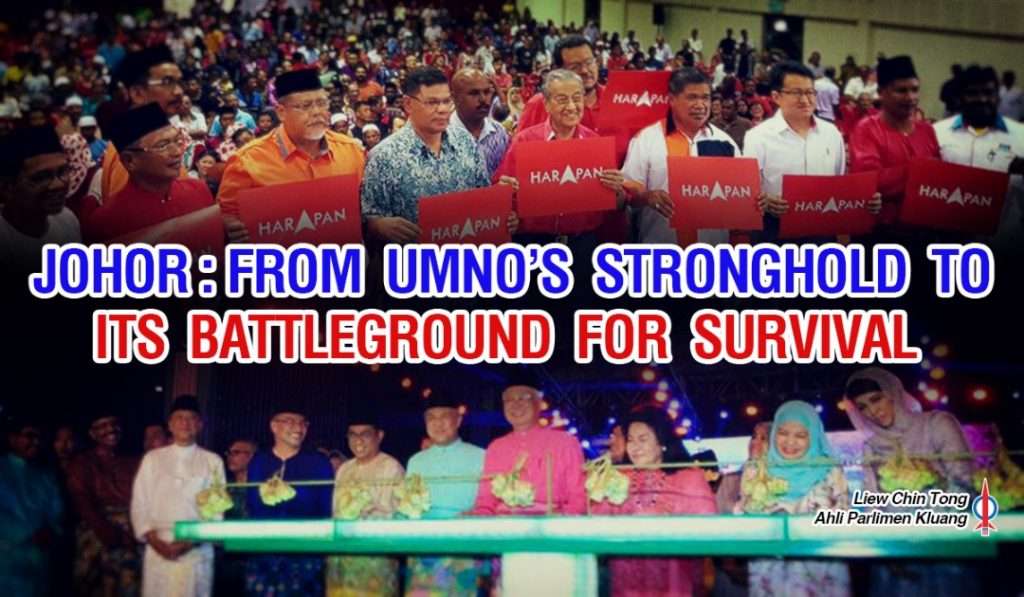 Over the last weekend, Johor was visibly the most important political battleground between Pakatan Harapan and Barisan Nasional that carries with it very interesting messages.

On Pakatan Harapan’s side, Tun Dr. Mahathir Mohamad delivered his first speech as Pakatan Harapan’s newly appointed Chairman -a fact that he noted at the start of his speech- in Kota Tinggi on Saturday (15th July).

The event in the UMNO stronghold was organized by NGO ANAK and attended by a multi-ethnic crowd of three thousand – a huge crowd for a small town that most consider to be one of the safest UMNO seats. Parti Amanah Negara President Mat Sabu, Parti KeADILan Rakyat Secretary-General Datuk Saifuddin Nasution and myself (representing DAP Parliamentary Leader Lim Kit Siang) attended as well.

In Kota Tinggi, I noted in my speech that Dr. Mahathir and PH leaders “attacked” one of the strongest of UMNO strongholds while Prime Minister Datuk Seri Najib Razak was in Johor as defend another UMNO’s safe seat of Sembrong – a telltale sign of our time.

I made the comparison of Kota Tinggi and Sembrong in jest but had a shock when I read the news report of Najib’s event later in the night – that defending Sembrong was indeed very much in the psyche of Najib and UMNO top guns. Najib declared that “We come here today to ensure that the land of Sembrong will remain firmly in the hands of BN”.

Something is very wrong if Sembrong needed national reinforcement and such high-level intervention by the Prime Minister so late into this election cycle. It just means that UMNO top guns, particularly Defense Minister and prospective Prime Minister candidate Datuk Seri Hishamuddin Hussein, has received intelligence that most seats in Johor, Sembrong included, are vulnerable and can fall into the hands of Pakatan Harapan.

Najib announced three projects at the event – the construction of 1,000 units of public housing in two phases, 500 homes for second generation FELDA settlers and the upgrading of Taman Sri Lambak police kiosk into a full-fledged police station.

“he would “pay the bills” for the people of Sembrong, but requested that they also repay him.

“Today, coming here should have been free, there shouldn’t be a need to pay anything.

“But looks like Hishammuddin had sent me the bill even before I arrived here… I was cornered,” he said in jest.

“So, with three projects, I have paid the bill for this meeting with the people of Sembrong. I have fulfilled your wishes, now you’ll need to fulfil mine,” he said.

Never mind that it was a government event funded by the public purse and not supposed to be used for partisan election campaigns, what it shows is Najib’s lack of understanding of the changing landscape of public opinion, especially among Malay voters. Najib still thinks that “You help me, I help you” project-funding promises would deliver the votes when voters want a clean government, better jobs and pay, as well as lower cost of living.

Also, if the third in rank in the Cabinet, as Hishamuddin is, has to beg for projects for his own constituency in such a public manner months before Parliament is dissolved, it just shows that the Government is dysfunctional.

The seat of Sembrong was created by the Election Commission in the 2003 re-delineation and very much “designed” for Hishammuddin who has held the seat since 2004. If Sembrong is in danger of falling, everywhere else is.

I spoke in Kota Tinggi that a change of government at the federal level would happen if Pakatan Harapan manages to win 10 seats each from Johor, Kedah and Sabah.

Both Sembrong and Kota Tinggi were not in my list of 10 seats that Pakatan Harapan deemed to have a fighting chance to win. However, gauging from the positive responses in Kota Tinggi and the panicking psyche of Najib and his associates revealed in the Sembrong event, Johor is probably the most important national battleground in the upcoming general election.