Malaysia as a middle power 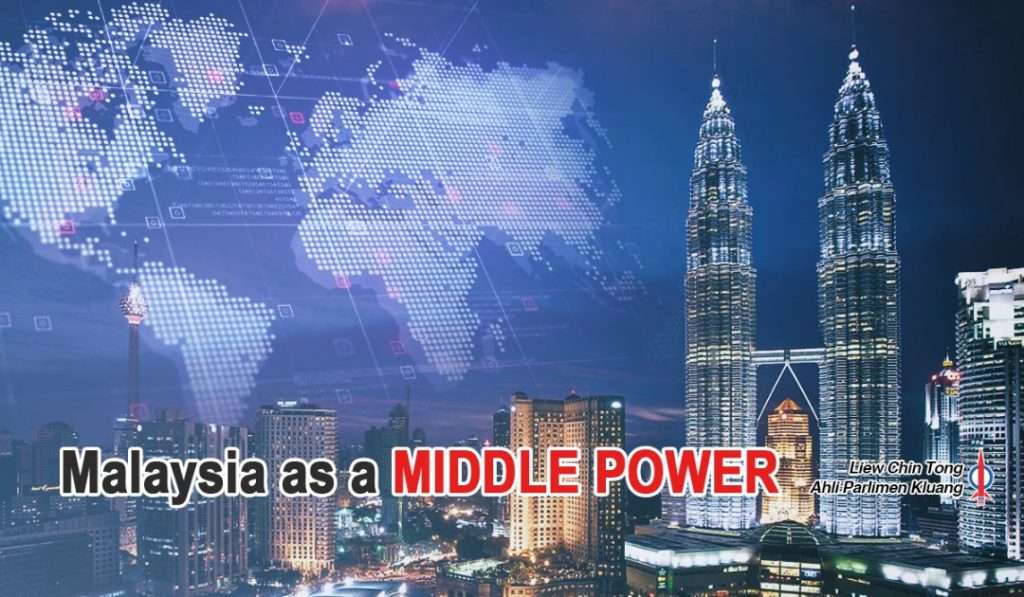 A country without a huge population or a massive economy is almost always not defined as a big power. Yet, Malaysia since its first foray into international politics has tried to punch above its weight. It did bring some global recognition and become quite influential. Unfortunately today, Prime Minister Najib Razak is making Malaysia smaller and more irrelevant than ever.

As soon as Malaya became a member of the United Nations, our first Prime Minister Tunku Abdul Rahman and his government took a principled stance to become one of the vocal global voices against South Africa’s Apartheid rule.

At the height of the Cold War, Tunku mostly leaned towards the United States, United Kingdom and the West in general. The Tunku was also reasonably well-connected with the Islamic world to earn him the post of secretary-general of Organisation of Islamic Conference (OIC) after his departure from politics.

During the long years as Tunku’s deputy, Tun Abdul Razak was quietly engaging leaders of the Non-Aligned Movement and other non-West actors, occasionally against the wishes of the pro-West Tunku. ASEAN, which is celebrating its 50th anniversary, was in part founded by his labour. Razak became Prime Minister in September 1970 and shifted Malaysia’s foreign policy to a less pro-West stance, with a bit more independent streak, and thus opening up substantial space for Malaysia to manoeuvre.

As Richard Nixon pursued a policy of detente after assuming the US presidency in 1969, leading to a series of rapprochements with China and culminating in his visit to Beijing in 1972, Razak inked a diplomatic relationship between Malaysia and China in 1974.

Significantly, Malaysia was the first non-Communist Southeast Asian nation to recognise the People’s Republic of China. Razak’s visit to Beijing in 1974 and his handshake with Chairman Mao Zedong was a major election boon for him and the newly-formed Barisan Nasional as many ethnic Chinese voters then were still looking up to China.

Whether we like him or loathe him, Tun Dr Mahathir Mohamad put Malaysia on the world map. Before Najib’s infamous 1MDB scandal, Malaysians who travelled overseas would attest that at the first mention of Malaysia, foreigners would ask about Mahathir, and possibly his erstwhile protégé and victim Anwar Ibrahim. To most of the Third World, Mahathir was some kind of inspirational leader.

I don’t necessarily agree with everything that Mahathir did during his 22-year tenure but suffice to say that most Opposition leaders would agree with the broad strokes of his foreign policy. During those years, Malaysia was a textbook case of a very engaging middle power – a state that is not a great power but influential enough to be taken notice of by the rest of the world.

The Look East Policy to cultivate the new “non-West First World” nations, especially Japan, to balance the influence of the West;
Being the loud opinion leader of the Third World and the global South; and
Being an active and influential Muslim nation among the Islamic world.

The breadth and ambition of Mahathir in reshaping Malaysia’s foreign policy outlook was quite extraordinary back then. It is sad that things have deteriorated under the current administration.

With Najib, Malaysia has a bad name as a kleptocratic state and it has serious implications for our conduct of foreign policy. Najib’s visit to Washington DC is a case in point. President Donald Trump, despite his controversy, is likely to be interested to talk to Malaysia about the situation in North Korea, terrorism activities in Southeast Asia and China’s influence.

But Najib’s preoccupation is the investigation on the 1MDB scandal and very little else. Naturally, Najib will use the concerns of the Trump administration as leverage in negotiation for his own troubles.

Earlier, Najib “pivoted” to China in exchange for deals which pulled him through with regards to the 1MDB finances. China is interested in balancing the influence of US in the region, so Najib used it to his own advantage.

The nation is bogged down by the Prime Minister’s scandals when we could rise to the occasion as an indispensable voice in Southeast Asia as the great powers, US and China in particular, vie for influence. Malaysia could have wielded more influence in ASEAN and beyond when engaging the US and China while not seen as susceptible to any party’s largess or favours.

In the case of the Rohingyas, apart from some cheap publicity stunts between Najib and PAS President Hadi Awang, Malaysia did almost nothing obvious to influence events. Malaysia could have been more visible in leading regional opinion against the killings of civilians or exert more pressure on the Myanmar government.

Najib doesn’t articulate a vision or future for Malaysia’s foreign policy. He sees Malaysia as a “small country” trying to extract financial deals and favours from the great powers. There are no principles nor ideals. There is not even an attempt to achieve anything other than protecting himself from investigations into the 1MDB scandal.

Yet he has the cheek to attack those who speak the truth as the people who tarnish the good name of Malaysia. I hope to see a change of government. I believe the new government would envisage itself as a middle power with moral purposes to do good for the international community and for Malaysia.

It is not that we had not done so before. It is just that we lost it with Najib’s misrule.

Previous PostThree-cornered fights may actually be bad for BN, PAS
Next PostNajib’s bunga mas to US bad deal for Malaysia