No need for Prime Minister to threaten Chinese community 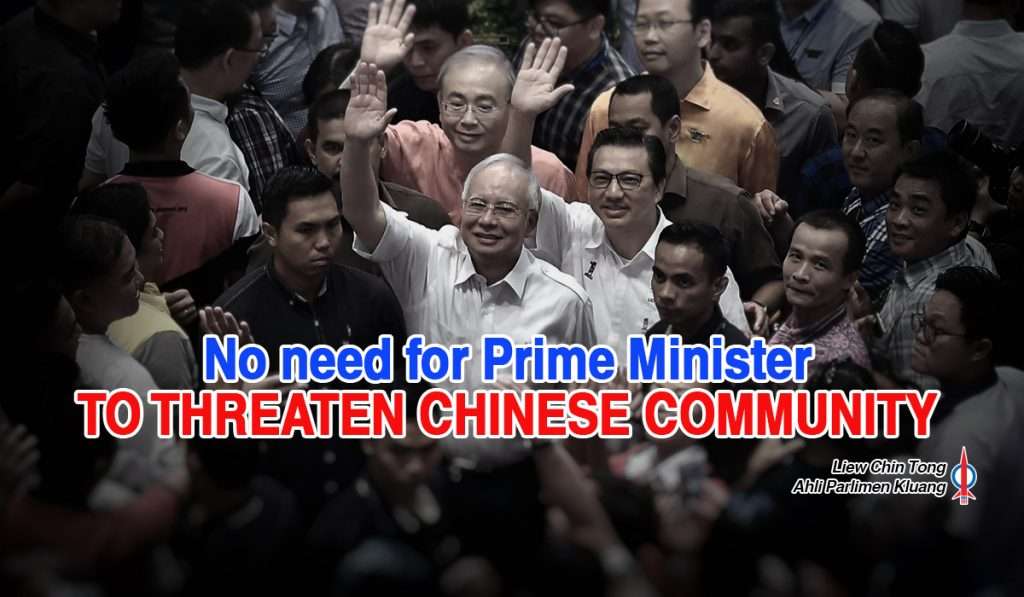 Hari Malaysia 2017 celebration yesterday was marred by Prime Minister Najib Razak’s speech which contained elements of threatening Chinese Malaysian voters in the lead up to the coming general election.

He was said to have made those remarks at the MCA-organised “Malaysian Chinese Patriotic Rally” held at the Putra World Trade Centre yesterday.

If Najib cares to remember, Barisan Nasional lost the trust of ethnic Chinese and Indian voters after former UMNO Youth Chief Hishammuddin Hussein wielded his keris at the UMNO General Assembly for three consecutive years from 2005 to 2007. The waving of the keris was perceived as a not-very-subtle threat of violence against those who did not agree with UMNO.

I am not surprised if it was the event organiser MCA who had advised Najib to make those remarks. At the moment MCA is obsessed with its “30% strategy” to win 30% of ethnic Chinese votes by threatening violence and advocating spoiled votes.

In the 2013 general election, the then Pakatan Rakyat received 85% of ethnic Chinese votes across the board in the Peninsula. What MCA is hoping is that by exploiting some problems within Pakatan and the fear among some Chinese voters, it could double the seats it won by winning 30% Chinese support while keeping the same level of ethnic Malay votes.

However, it is quite foolish for the MCA to assume that Malay voters would continue to support UMNO as it is now visible and clear that many Malays are prepared to jump from Najib’s sinking ship.

It is also wishful thinking by Najib and MCA to assume that Malay voters would not feel angry at the waste and plundering of Malaysia’s resources by Najib, his family and associates.

Malaysians must teach Najib and MCA a hard lesson so that they would learn to respect voters and democracy regardless of ethnic background.

They must be reminded that no leader should ever threaten an entire community merely to gain votes. To single out the ethnic Chinese in such a way, Najib and MCA are only making more people angry with Barisan Nasional.

Najib’s remarks would only anger most Malaysians as no one likes to be threatened with violence, veiled or otherwise.

This is yet another reason for us to reject Najib, MCA and Barisan Nasional in the coming general election.