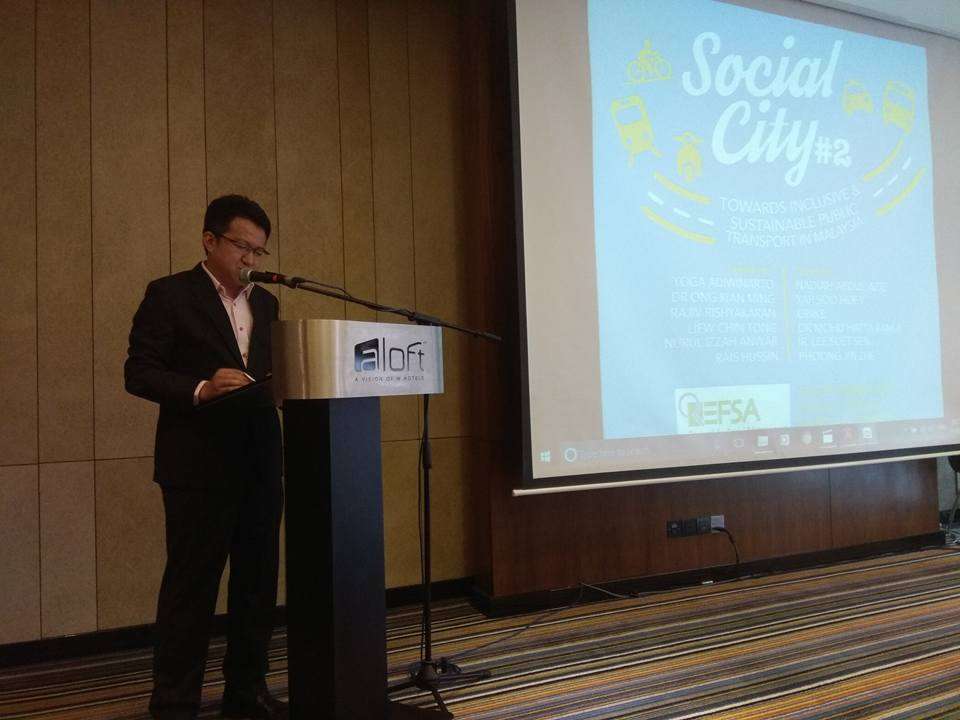 I would like to welcome all of you to the 2nd Social City Conference organized by REFSA which focuses on “Inclusive and Sustainable Public Transport in Malaysia”. In October 2016, REFSA organised the first installment of this conference series with the theme of “a sustainable approach to urban planning”.

Many of us talk about “livable city”, “creative city” or “sustainable city”. Here we want to emphasise on the political aspect of cities with the idea of “social city”. A city is only considered a good one when it is inclusive socially and economically. With the right set of policies, the city can provide many with opportunities for upward mobility and be a great level playing field for all to thrive, which rural and agricultural areas may not be able to do.

However cities can also exaggerate the gap between the haves and have-nots, and make it worse, especially when the societies are organised to benefit the top few at the expense of the rest. The “social city” agenda is set in such context to discuss how cities bring forth the good life many aspire in a sustainable and inclusive manner.

How to govern cities has become a very important political question globally. Urban governance, or the lack of it, often decides the fate of governments. Even one-party state China has to be very concerned about the quality of air in Beijing and other major cities as it affects the popularity of the government. And, often, popular mayors are elected to top national offices like President Jokowi of Indonesia.

For cities to function, transport is the key underpinning factor. Malaysia is a case of not getting transport right and hence the nation suffers collectively, both economically and in terms of quality of life.

Malaysia has 11 million registered private cars and another 11 million motorcycles. A Nielsen survey in 2014 shown Malaysia has the third highest per capita car ownership in the world with 93 percent of households owning at least a car, 54 percent own more than one car.

Enrique Penalosa, former Mayor of Bogotá, Colombia said: “A developed country is not a place where the poor have cars. It’s where the rich use public transportation.” We turned that around and have a situation of “most of the poor have cars, and if they are poorer they are on motorcycles.”

In Malaysia, even with such a huge ownership of private cars and motorcycles, the transport needs of women, students, elderly, children, disabled and the very poor are not catered for adequately.

Malaysia is among the nations of having the highest road deaths per capita. Each year, about 7000 die in road accidents and many more are injured severely too. Two thirds of the fatalities are motorcyclists.

The Government takes the approach that road accidents can be reduced purely by teaching people how to behave properly, but the truth is that motorcycles are more susceptible to accidents and injuries than those behind the wheel, period.

We hardly talk about the economic and social costs of caring for those permanently injured. Yet, if everyone who rides a motorcycle today owns a car tomorrow, the number of cars on the roads will double. With the cities are choked to no end, the nation’s consumption of oil will double, too. We can choose to build more roads to cater for more cars but that doesn’t solve the problems.

Of course, the economic cost of car owning is very high too. Often young families in the city spend a third of their income on installments for car loans, petrol and maintenance, thus depressing disposable income which can be spent in other parts of the domestic economy.

While Malaysia benefits from being an oil exporter but in part because of the heavy dependence on private vehicles, we are now a net oil importer since 2014.

How does this impact petrol prices? Research has shown that there is a clear correlation between higher petrol prices and road deaths in Malaysia. As a government, you have blood on your hands when you increase petrol price. But can petrol price be permanently subsidised at the expense of other expenditures and at the risk of bankrupting the treasury? Perhaps not.

Therefore, as a society, we need to make hard political choices over resource allocation. To cater for the transport needs of a growing population without everyone having to resort to private cars and motorcycles with the economic and social costs, public transport is the only way out.

But, a workable public transportation system is not exactly in Prime Minister Najib Razak’s mind. While his associates may him “the father of public transport”, he is merely building big toy infrastructures, and not a connected system.

Only those in the construction sectors are really excited about big ticket projects such as the MRT and LRT extensions as they benefit from the contracts and jobs directly.

To begin with, the various big infrastructures don’t “talk” to each other. MRT and KTM run their own different systems, not as one single system.

There is no transformative impact on the lives of ordinary folks in Kuala Lumpur as these are just concrete and trains but not a system. It is just for Kuala Lumpur and the cost is already sky high.

My parliamentary colleague Dr Ong Kian Ming is an expert on this, and his study reveals that Prasarana has a debt of more than RM 20 billion and MRT alone costs RM 21 billion to build, land costs not included. Malaysians outside Kuala Lumpur don’t get anything out of these infrastructure projects.

A well-connected system connects a person from his home to his destination through all mode of public transport, whichever is suitable. Buses are the cheapest option. I always joke that even with corruption and with the depressed ringgit, a European-made bus probably costs not more than RM700,000.

Buses and some forms of Bus Rapid Transit (BRT) have to be part of the solution. Kuala Lumpur had 1,500 buses in 1985 when Klang Valley was only one-third of its current size. There are less than 1,000 buses in the wider Klang valley area now. Ultimately, a well-connected system has to solve the “last mile” question first before buying big toy infrastructure.

In Malaysia, until the “CAT” free bus was first introduced by the Penang Government in 2008, “user-pay” was the prevailing idea. Governments at all levels think that road construction and maintenance is their responsibility but not public transport.

The purpose of public transport

The idea of providing free buses is not about free bus per se , but about getting the government to pay for public transport. Public transport is a public good.

If we want to cater for the transport needs of the entire nation and not just Kuala Lumpur, a more affordable mode than big infrastructure would have to be adopted. Traffic congestion doesn’t just happen in Kuala Lumpur, it happens in many secondary cities too.

Another reason to think of more affordable choice of transport mode is this: just like roads which are only congested during peak hours, public transport is only packed during peak hours. Therefore, building huge infrastructure may mean the facilities are idle most of the time.

And, I can’t resist saying this, the purpose of public transport all over the world is to get people to work and back home on working days during peak hours. It’s not about bringing people to shopping malls.

There is a misguided belief that big toy public transport infrastructure can be funded through a “Hong Kong model” of “transit-oriented development” through selling lands around a transit station for property development such as shopping malls and condominiums.

KL Sentral and many other “Sentrals” around the country testify that such property plays do not improve the quality or increase the usage of public transport.

Transforming public transport in Malaysia is my passion in part because my father was once a taxi and minibus driver, and since the time I was taking public buses to school twenty-five years ago, I thought we could improve our public transport.

For the nation, the debate about transport will only increase in importance as we grapple with increased transport needs of a growing population (as well as other cities outside Kuala Lumpur), energy efficiency, reducing road deaths and accidents and other economic and livability choices.

We need a new paradigm for public transport for all.