15th World Day Against the Death Penalty Message: Will the bill to remove the mandatory death sentence finally be tabled when Parliament sits in two weeks time? 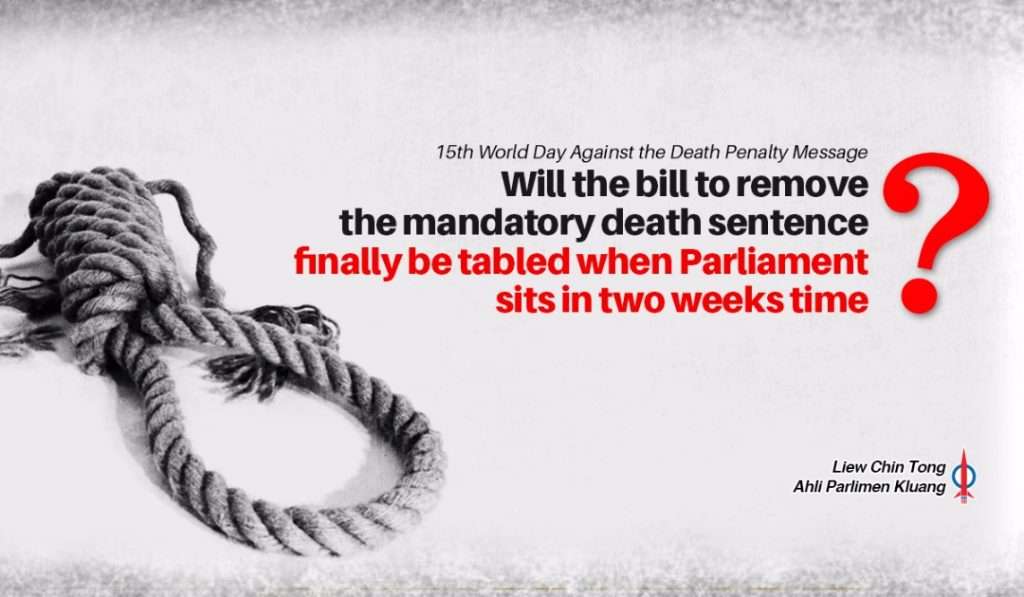 On 10 October 2017, we mark the 15th World Day Against the Death Penalty. Each year, different themes and initiatives are used to encourage the abolishment of the death penalty. This year’s initiative aims to raise awareness about the reasons why people living in poverty are at a greater risk of being sentenced to death and executed.

The campaign notes that “The application of the death penalty is inextricably linked to poverty. Social and economic inequalities affect access to justice for those who are sentenced to death for several reasons: defendants may lack resources (social and economic, but also political power) to defend themselves and will in some cases be discriminated against because of their social status.”

This message is a timely reminder to Malaysians, as we ponder about the future use of the death penalty in our nation. The irreversible nature of the punishment means that an erroneous conviction based on flawed process, could not be reversed. The wrongly-executed person’s life cannot be returned.

No one can vouch for fool-proof and corruption-proof process of investigation, hearing and sentencing. Just last week, a South Korean national was acquitted in Seremban after the court found that a policeman had lied during the investigation. This case involved a drug related offence that carries the death sentence.

In Malaysia, the campaign to remove the death penalty has taken a gradualist approach. The outcome from the bipartisan parliamentary roundtable conference in June 2011 was a consensus of our immediate agenda- to abolish the mandatory death sentence and to return sentencing discretion to the judges, especially in drugs-related offences.

However, the milestones towards achieving this goal have been slow in the past six years that have elapsed.

Minister in Prime Minister’s Department, Azalina Othman Said, told the Parliamentarians for Global Action (PGA) conference at the Malaysian Parliament on 25th July 2017 that a bill abolishing the mandatory aspect of capital punishment for drug-related crimes would soon be presented to the Cabinet, before being put to vote in Parliament.

(2) In a parliamentary response dated 7 August 2017, the Government said that the Cabinet had approved a bill which would amend Section 39B of the Dangerous Drugs Act to give the judiciary the discretion to impose the sentence they see fit – should be introduced to Parliament soon.

As Parliament will begin sitting for the final time this year on 23rd October 2017, we strongly hope that this bill that is said to have been in the drafting stage for so long, will finally see the light of day in Parliament.

I call on Minister Azalina to release the draft bill to MPs before the start of the Parliamentary session so that MPs, members of the civil society, and the public can study and suggest improvements to the said bill to allow for meaningful debate during the Parliamentary Session.

Previous PostFailure of Najibnomics – blaming the victims, scoffing at people
Next PostHow did Malaysia lose its bid for a seat on the UN Human Rights Council?