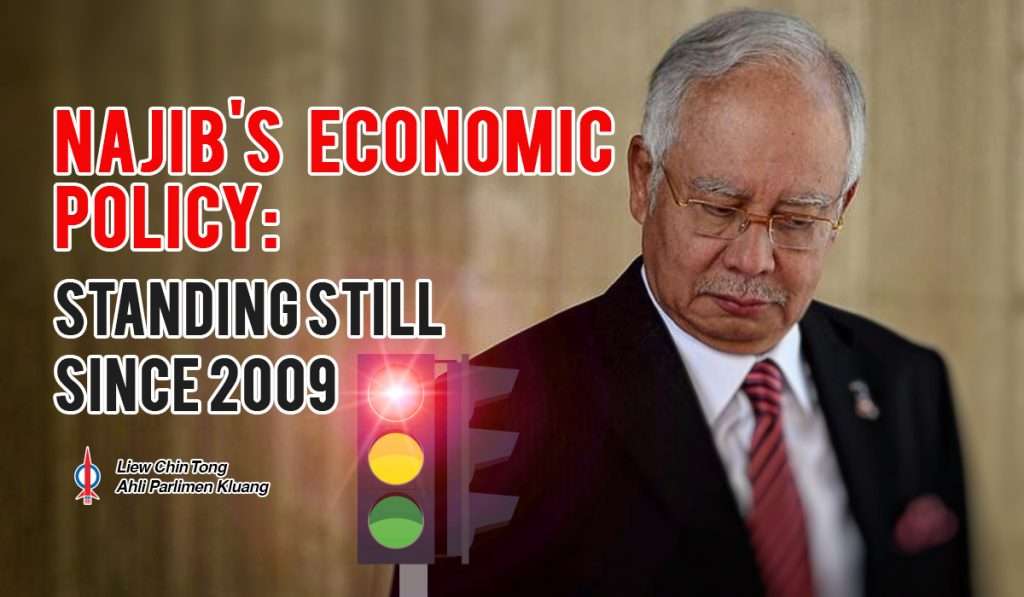 In the past nine years as Minister of Finance and eight years as Prime Minister, Najib has wasted the chance to transform the Malaysian economy to bring it back to the right track. What should Najib have done?

A progressive and caring government would have set a long-term plan for the benefit of all Malaysians, in close consultation with the private sector, to move our economy away from labour-intensive operations to one that is based on skills and knowledge.

This is one of the major aims to be implemented when a new Pakatan Harapan government is formed in the coming general election. Good governance will be the crux of the new administration to ensure that the focus is on the economy and the betterment of the people’s livelihood.

Those who talk about the Fourth Industrial Revolution (Industry 4.0) displacing workers with machines should first deal with the fact that unskilled foreign labour is already displacing locals in a massive way under the Najib administration. Although this problem did not start with the current Prime Minister, it is getting a lot messier and more massive during his tenure.

The best way to get out of this vicious cycle is to ensure the virtuous cycle of the economy that is keeping highly skilled workers, generating growth that is premised on high productivity, and paying them higher wages.

It is not going to be easy but under Pakatan Harapan, it will be a new era of a thriving economy after the years under Najib will now be seen as a wasted decade. Malaysia has squandered the opportunity to reinvent our economy.

In my first pre-budget commentary “What Najibnomics? It’s Nothing-nomics!”, I lamented that Najib had no plan in the past nine years as Minister of Finance and more than eight years as Prime Minister. In Najib’s 17-page response piece “My Economic Vision for Malaysia” yesterday, he just confirmed that he doesn’t understand the needs of ordinary Malaysians, and what it takes to make Malaysia great.

Apart from the outlandish claim that 1MDB is “on track to realise a profit”, which has been ably dealt with by my Parliamentary colleague Tony Pua, Najib is trying to explain away that GST was the right thing to enforce, cutting subsidies is a good thing for the people, and the depreciation of the Ringgit has nothing to do with his policies.

Perhaps Malaysians should be satisfied and happy with his explanation. Yet, many of us are unhappy.  Are Malaysians not happy because the Opposition committed “economic sabotage” as claimed by the Prime Minister? The word “sabotage” is disturbing and implies possible retaliation and retribution against legitimate criticism of his economic policies.

Why are Malaysians unhappy?

Perhaps Najib’s advisors have not been telling him that many Malaysians are unhappy with the current economic condition. These are among the major causes of their unhappiness::

1. The combined effect of GST implementation, government austerity in welfare, healthcare and education (excluding Najib’s and Rosmah’s luxurious lifestyle and travelling), and depreciation of Ringgit, is serious yet no one wants to recognise that there is a silent crisis;

2. We are facing a two-speed economy which sees the export sector doing reasonably well as a result of global recovery but the domestic sector plunges further because of the silent crisis of depleting disposable income, and hence consumption. The export sector is increasingly employing less Malaysians but more unskilled foreign workers, hence whatever benefits bring very little spillovers domestically. Much of Malaysia’s export sector is dependent on a large proportion of imported goods, signifying the low value-added nature of our economy;

3. While Najib wants to boast about his economic credentials, he has no solutions to the following apart from asking young graduates to sell nasi lemak and asking the jobless to drive Uber during his Budget 2017 Speech last year.

He doesn’t seem to care that:

How to reinvent our economy

Najib lost the opportunity to reinvent the Malaysian economy, by not taking a long range view in 2009 and bringing the nation along to tackle those challenges. Tweaking wont work and we have wasted nearly a decade standing still.

First, export-led growth has its limitations – or to be more precise, it has run its course. Since the early 1970s, export-led growth brought great prosperity to Malaysia. But Malaysia lost its competitive advantage since China’s entry into the World Trade Organisation (WTO) in 2001. Since the Global Financial Crisis in 2008, this strategy will no longer work.

An export-led strategy pre-supposes that a wealthy United States, (and, to a lesser extent, Europe) would be able to consume the industrial products of Asia. Since 2008, the US and Europe have experienced very slow growth and a very high unemployment rate. This means wage growth won’t be high and consumption won’t be strong.

Exporting finished industrial products to China and Japan is not a sound strategy as both have massive industrial capacity. Integral to the export-led strategy is that growth is predominantly driven by investment into productive capacity, as well as a low-wage policy.

Second, a rebalancing should have taken place as soon as the Global Financial Crisis hit in 2009, which was proposed in Malaysia’s stillborn New Economic Model.

China is a case in which an economy has rebalanced reasonably well over the past decade from being export-led to giving more emphasis on growing ordinary workers’ incomes to expand domestic consumption. At the same time, its services sector grew to fill the void of stagnated industrial production.

Under Najib’s rule, Malaysia is acting as if the external environment has not changed at all. The two main components of Najib’s strategy are still export-led industries and mega project-driven (now branded as big toy public transport infrastructure such as MRT).

Domestic consumption has become the main driver of the Malaysian economy since 2009 but it has mostly been debt-fueled, and not income-driven, hence the very high household debt level at around 90 percent to GDP.

Malaysia is now mostly attracting foreign investment that hires foreign workers to assembly imported parts. Not enough value-adding, insufficient local contents and low multiplying effects, resulting in the two-speed economy. This means those in the export sector are seeing some growth; while others who are cut off from those sectors are suffering from the combined effect of GST implementation, the depreciation of ringgit and government austerity on welfare, healthcare and education.

Third, the central importance of jobs in the economy. Najib and his associates like to talk about millions of jobs being created. But no one seems to be able to answer on what sort of jobs, at what level of sophistication and the attractiveness of pay.

Najib has not seriously dealt with the massive influx of unskilled foreign workers, especially in the past few years. The foreign labour trade is dominated by UMNO-linked personalities and selected former senior civil servants. All plans to reduce the number of foreign labour are not serious and mainly serve as a way to extort more revenue from the private sector.

Tomorrow, in my third installment of pre-budget commentaries, we will discuss several necessary political reforms for the economy to thrive. The years under Najib could be considered as the wasted years of the Malaysian economy. For a fresh start, we need a new government and a New Deal.