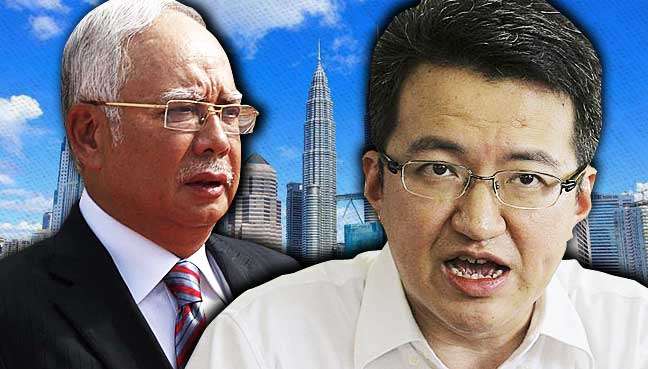 Prime Minister Najib Razak has been on survival mode since the revelation in 2015 that he was personally connected to the 1MDB mega scandal. Even before that, he has not been thinking about serious reforms to transform the Malaysia economy but merely muddling through on ad hoc and short-term populist ideas.

So, it is absolutely silly and ironic to see Najib dismiss Pakatan Harapan’s alternative budget as one that is “populist, full of contradictions and cannot be funded.”

In more advance democracies such as the United States and Australia, there are independent and non-partisan Parliamentary units to ascertain budgetary proposals from both sides, this takes the form of the Congressional Budget Office in the US and Parliamentary Budget Office in Australia. Without such independent scrutiny in Malaysia, it is ridiculous for Najib to resort to name calling.

The Malaysian economy will just muddle through further until we get our politics right. The Prime Minister wants to win the coming general election and stay in power forever. He can’t afford to lose because it would mean his past would be scrutinised by the new Pakatan Harapan government. Hence, removing Najib is but the first step to bring Malaysia back to the right path.
Najib has been Minister of Finance for nine years since 17th September 2008 and Prime Minister for more than eight years since 3rd April 2009. Instead of steering the nation through tough and difficult rebalancing and reforms, he chose the lazier and populist way by sidestepping the heavy lifting acts required of his leadership.

Here are some New Deal ideas that eluded the Najib years which stalls Malaysia’s move to the next level. This is not an exhaustive list but the point is to avoid further economic insanity. As Albert Einstein said, insanity is doing the same thing over and over and expecting different results.

1. Ensuring fairer distribution as an engine of growth
The Global Financial Crisis in 2008 has slowed the growth of United States and Europe significantly which means the export-led growth of Asian countries since the 1960s won’t be as rewarding as it was as the developed world is not consuming as much from the industrial products of Asia. The Malaysian economy has been driven by domestic consumption since 2009, except that it is mostly fueled by household debts.

During the export-led era, paying workers less allowed us to have competitive prices in the export market. But today, paying Malaysian workers better means more sustainable income-driven domestic consumption. That idea has not sunk in yet, which should have been properly articulated by Najib in the past decade.

2. Moving beyond the labour intensive model
Economic growth can be driven by the inputs of capital or labour or innovation/ ideas/ productivity (technically: Total Factor Productivity).

Malaysia is still stuck in the model of growth by more capital investment or more unskilled labour. The end result is that we are bringing in foreign capital to hire foreign workers. And Malaysian graduates and young people work overseas, sometimes as 3D workers, as the home economy doesn’t create sufficient skilled jobs that match their education attainment, and the jobs available don’t pay enough.

Innovation, ideas, automation, technological advancement and R&D should be the driving force for the economy. We need brain power, not brawn power. A case in point is Switzerland, one of the richest countries in the world, which does not have a huge population.

Moving away from the labour intensive model, reducing the number of unskilled foreign labour, massive automation and technological upgrade will see young Malaysians staying home to contribute to the economy while everyone gets paid better.

3. Improving the care economy
Apart from some lip service, no one seems to really care that our society is ageing quite fast and we need to rethink and adapt to such scenarios. The care economy has huge potential to provid e decent employment for Malaysians if we get our wage structure right. Today we may have good doctors in our public and private hospitals but very few senior nurses stay home to serve. Many experienced nurses, after several years in service, move to work in Saudi Arabia or Singapore or Australia, as salary for nurses, even in private hospitals, are way too low.

4. Paying people to take the bus.
Transport cost forms a very substantive part of an ordinary Malaysian’s expenditure. Low and middle income families could spend up to a third of their income on car installment and fuel.

The big toys infrastructure (such as MRT and LRT extension) that Najib is pushing accumulates huge debts for the nation but doesn’t shift the transport mode from private cars to public transport as the last mile transport has never been properly planned. And such big toys are mostly concentrated in Kuala Lumpur and the Klang Valley.

Malaysia should radically think of the massive deployment of buses nation-wide in a dramatic fashion to shift 50 percent of transport mode from private cars to public transport nationally.

“Paying people to take the bus” has two components: first, the Government assumes the responsibility of paying for public transport in a big way for the public good; second, deploying buses as the key component rather than expensive rail toys.

We should aim that within a decade, owning a car is a luxury and not a necessity. If we can achieve that, we will free up huge consumption potential from ordinary Malaysians instead of spending on car ownership.

Is it the best national strategy for EPF to invest 30 percent of its funds overseas, including investing in the United States? GLICs are “voting with their feet” because returns on investment in Malaysia are too low. Here is where the Government has to look at the health of the overall economy and not allow huge amount of capital to be invested elsewhere while the Malaysian economy is starved of capital.

The role of GLCs also need rethinking. Take the health sector as an example. Since the advent of profit-seeking private hospitals, a dual system emerges with doctors in government hospitals moving to work in private ones for better income. Middle class Malaysians pay exorbitant rates for private hospitals while the quality of government facilities declines sharply with the exodus of experienced doctors. Strangely, most of the PRIVATE hospitals in Malaysia are owned by government through GLCs.

The same happens to the property sector. The GLCs and GLICs own equity and even manage quite a few top developers. These companies compete to drive up land prices since around 2010, under the watch of Najib. Between 2009 and now, housing prices in urban areas have doubled if not tripled .

6. Making the banks serve productive sectors, beyond the property and automotive industry
Tied to this is the role of banks. GLICs and GLCs have huge stakes in the banking sector but they act like a private bank and are mostly interested to provide housing and car loans but are overtly cautious when it comes to providing loan to SMEs.

Financing is very important to the economy. If up to 60 percent of loans of major banks are for property purchases and up to another 20 percent for cars, something is very wrong with our banks.

The need of the productive sectors is crowded out. No wonder the economy hasn’t grown much.

7. Reassessing the role of the government
The fundamental question is: what is the government doing? What are the roles of a government? If you go by Najib’s propaganda, the government is there just to collect taxes, build big infrastructure (which inevitably benefit the contractors more than the users), and give out BR1M. For ordinary Malaysians, everything else is left to their own devices.

If you can’t make ends meet, it is your own fault, according to Najib’s Treasury Secretary General Irwan Serigar Abdullah. It seems that, comfortable in power, Najib and his administration have forgotten the government’s role in shaping the future for all of us, providing the right ecosystem for everyone to thrive and playing the arbiter role when injustices occur.

In the next installment for post-Budget commentary, I will discuss the following ideas which could provide the impetus for our next growth:

1. Win-win decentralisation – to empower the states to push for economic development, especially for Sabah and Sarawak;
2. Connecting Secondary Cities – creating a viable transportation system and high speed internet to make those living in secondary cities and semi-urban areas seamlessly connected to the cities;
3. An agricultural revolution – Malaysia should be a great agriculture producer;
4. SMEs – small businesses should be the primary driver of our next growth;
5. Women’s power – getting more women to be in the work force and work for longer years will be a great impetus to transform our economy;
6. Bangsa Malaysia – an economic message that is built upon solidarity of all Malaysians is a far superior one than a highly racialised one;
7. Malaysia as a middle power – for the Malaysian economy to be strong, the standing of the nation in the eyes of the world cannot be too low. Being a globally respected nation helps open doors.

Previous PostNajib’s economic policy: standing still since 2009
Next PostDevelopment Allocation: for Najib, not for the rakyat