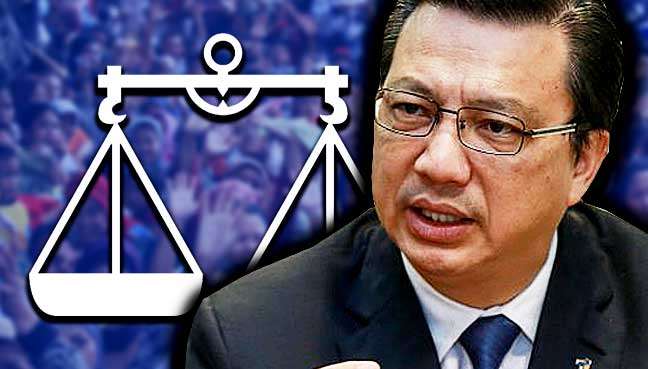 According to Liow, it would be detrimental to the nation if Kit Siang were to become Prime Minister, alleging that the veteran DAP leader is an unprincipled politician who was clever at sowing racial discord.

“Only he knows if he has ambitions of becoming Prime Minister or Deputy Prime Minister. I would say that he is a politician who cannot be trusted and will cause racial disharmony,” Liow said after attending a community event in Paloh in Kluang on Sunday.

Why would Liow stoop so low to become the stooge of Najib and Hadi?

A former UMNO strategist recently shared with me that in 2013, the intelligence units (Special Branch, Military Intelligence Unit, JASA and others) told Najib he could win with a 60% plus popular votes as his personal popularity was high among the voters, that he could carry UMNO and BN to a very comfortable victory.

According to the strategist who was in close distance with Najib on the night of election, when many things went wrong for BN, the Prime Minister was visibly shaken and shocked by the results.

To reshape the scene, Najib had to do something dramatic. Through his friend Yusof Kala, Indonesia’s Vice President who was then not in public office, Najib was trying to reach out to Anwar to entice the former Deputy Prime Minister to be part of his government, which Anwar very nobly refused in August 2013.

Indeed, Anwar paid a very heavy price for his refusal. Whenever I think about Anwar’s imprisonment, I feel a sense of great sympathy for him and for the sacrifices he made to keep the Opposition coalition intact especially after the 2013 general election. It wasn’t easy.

Najib’s three-point game plan was more or less visible by mid-2014. First, to take out Anwar as the unifying factor of the Opposition; second, to lure PAS to BN’s fold; third, to paint the Opposition as DAP/Chinese/Lim Kit Siang-led in an attempt to scare off Malay voters who would otherwise support the Opposition.

By taking away Anwar and luring PAS into its fold, Najib was trying to tell the Malay swing voters that they had to stick with him, however corrupt his government is. He was trying to win by default.

Anwar was sent to prison after losing his appeal at Federal Court on 10th February 2015. Effectively, there was no more unifying figure for the Opposition.

In March 2014, UMNO begun pushing the hudud/ RUU355 issue to entice the hard-line faction in PAS to align with it. It was also a time when PAS President Hadi Awang was unhappy with PKR’s Kajang Move which was aimed to resurrect Anwar’s prominence.

By the time Najib visited Hadi in hospital in late June 2014, the idea of an UMNO-PAS team up was already in its infancy, with Hadi’s blessing. The PAS President played a recalcitrant role in the Selangor Menteri Besar crisis in August and September 2014, and from early 2015, treating DAP as Enemy No 1 to justify PAS’ pivot to UMNO.

On 5th October 2014, when I debated Kluang MCA Chairman Gan Peng Sieu at Sinchew Daily’s headquarters, I predicted that “MCA will become a de facto coalition partner with PAS in due course.”

Today, not only MCA is a de facto coalition partner with PAS, MCA President is now parroting the line of Hadi Awang that Lim Kit Siang aspires to be Prime Minister, and it is harmful to the nation.

I am very glad that Malaysians saw through Najib’s three-point dirty game. Against all odds Pakatan Harapan was formed, and it is a reinvigorated platform for change because leaders in PAS who refused to play the bigotry game had left to form Parti Amanah Negara, and leaders in UMNO who refused to sink and stink with Najib’s kleptocracy decided to quit and form Parti Pribumi Bersatu Malaysia to provide Malaysians a choice.

For Liow and MCA, their politics have gone from bad to worse. They will soon be a footnote in history.