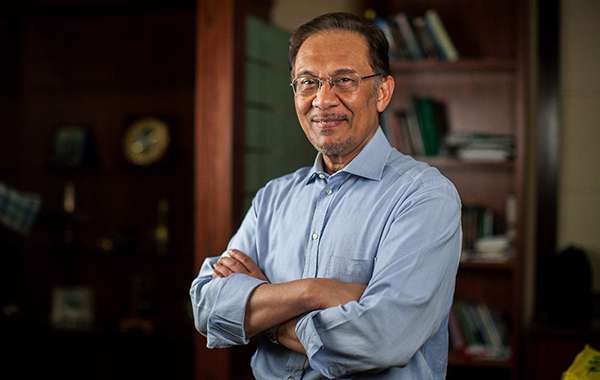 There has been a sea change since Datuk Seri Anwar Ibrahim was sent to prison on 10th February 2015. The constant attempt to remove Anwar from Malaysia’s political equation since 2008 has now backfired on Prime Minister Datuk Seri Najib Razak. It has produced one of the most unthinkable reconciliations in world’s history between two nemesis: Anwar and Tun Dr Mahathir Mohamad.

On 28th June 2008, I was on Astro TV channel for a Mandarin talk show programme when I first heard of the news of police report by Saiful Bukhari Azlan against Anwar. Between 2004 and Najib’s ascendance as Prime Minister in April 2009, there was a period of time in which television stations experienced a small spring of freedom. Many political talk show programmes were aired in multiple languages. The rules then were 1) no attack on Prime Minister Tun Abdullah Badawi; and 2) speak with facts. All these came to a halt as soon as Najib became Prime Minister.

Upon hearing the news, I rushed to Concorde Hotel, Shah Alam, where Parti KeADILan Rakyat was having a retreat, to offer Anwar our morale support. Anwar sought asylum at the Turkish embassy on the following day.

Lest we forget, let us understand the context that led to Anwar’s second imprisonment a decade ago.

What they did to Anwar

On 8th March 2008, Barisan Nasional lost its two-thirds parliamentary majority as well as an unprecedented loss of five states. The Opposition won 82 parliamentary seats, up from merely 19 seats gained in the 2004 general election.

Most analysts agreed that Abdullah dissolved parliament on 13th February 2008 (on the 7th Day of Chinese New Year) before the 11th Parliament reached its fourth-year mark to avoid Anwar being eligible to become an election candidate.

Fundamental to Barisan’s longevity in power has been the lack of a singular Opposition front and a common leader accepted across ethnic communities. Tengku Razaleigh Hamzah provided such leadership in the 1990 general election while Anwar played that role in the 1999 election while in prison. Subsequently, in 2013, Anwar played the alternative Prime Minister role (though not recognised by PAS, then one of the three component parties of Pakatan Rakyat).

Despite not being eligible to contest, Anwar’s leadership was the major contributing factor to the political tsunami in the 2008 general election. A case in point was the seat deal in Penang between PKR and DAP on 9th January 2008. I was the minute secretary assisting DAP leaders Tan Kok Wai and Teresa Kok in their seat negotiation effort. Explicit red line was conveyed: that DAP in Penang would contest 21 out of 40 state seats. Eventually Anwar and Lim Guan Eng settled at DAP contesting 19 seats while PKR was to split the remaining ones with PAS.

The deal gave the Penang Opposition the certainty of seats so that they could launch into ground campaign. I was slated to contest in Bukit Bendera parliamentary seat and benefited indirectly from the deal. The PKR candidate who was originally slated for Pulau Tikus state seat, deemed unwinnable as the opponent was Gerakan’s supposed Chief Minister candidate Teng Hock Nam, was given the seat of Kebun Bunga, which was supposedly easier to win. He happily ceded his campaign centre at the beautiful Bangkok Lane (in Pulau Tikus state constituency while both state seats are in Bukit Bendera). Much as everyone else said Bukit Bendera was an impossible feat, on the day I moved to the building (built in 1920), I felt I was on the way to victory.

More importantly, the deal sealed the national image of an Anwar-Guan Eng leadership pair. Guan Eng spent a year at Kajang Prison from 25th August 1998 while Anwar was incarcerated between 20th September 1998 and 2nd September 2004. Guan Eng was not able to contest both the 1999 and 2004 general elections. The 2008 election was the first outing for him since 1995.

The Anwar-Guan Eng combo image had huge national ramifications in the two months subsequent to the 9th January 2008 deal. The deal reached by Pakatan Harapan on 7th January 2018 to name Mahathir as the 7th Prime Minister and Anwar the 8th, as well as the seat deal, gave a similar feeling of the certainty of seats and leadership.

UMNO was in turmoil after the March 2008 election as the lackadaisical leadership of Abdullah Badawi was blamed for the losses suffered by UMNO/BN. Anwar was eligible to contest from 14th April 2008 onwards and the talk of Barisan Nasional being replaced on September 16th with Anwar as PM began to emerge.

Pakatan Rakyat was officially formed on 1st April 2008 which further enhanced the image of Anwar as the alternative Prime Minister.

Anger flared across the nation when Prime Minister Abdullah increased petrol price by 40 percent on 4th June. The public began to be receptive of, and excited by the idea of a new government led by Anwar. An emergency Parliament sitting was called on 23rd June to endorse the Government’s move to increase petrol price in the hope to tame public anger. Many MPs from Barisan privately shared their frustrations with us and some thought the fall of BN was not impossible.

Until this day, I am still puzzled by Abdullah’s decision on the massive fuel price hike. His position was already severely undermined on 8th March and further eroded when Mahathir quit UMNO in protest of his leadership in May 2008. The advocates for the 40 percent fuel hike should be punished for ending Pak Lah’s already rapidly diminishing leadership.

Around the same time, in an attempt to show openness and readiness, Ahmad Shabery Cheek, then Information Minister, agreed to debate Anwar on television on petrol prices, further giving Anwar the legitimacy as the alternative leader. The debate happened on 15th July but on 14th the entire Kuala Lumpur was locked down by the police in an attempt to arrest Anwar, probably to avoid Anwar debating Shabery. Anwar was subsequently arrested on 16th July, a day after the debate.

Najib has the most to lose in the event of a sudden change of government in Anwar’s favour. He was somewhat implicated in the Altantuya scandal. I introduced myself to Najib at the sideline of the Shangri-La Defense Dialogue in Singapore on 1st June 2008 before he took to the stage to speak. The first thing he told me – a fellow Malaysian MP from the Opposition whom he met for the first time- was that he wasn’t involved in the Mongolian scandal. My UMNO friends think that the scandal was at the back of his mind all the time and he was always worried that he would be the first to suffer in the event of change.

Anwar’s legal team had repeatedly argued that Saiful’s meeting with Najib and his wife Rosmah Mansor days before his police report showed that Najib had a role in the Sodomy II case. The choice of Shafie Abdullah, a private lawyer closely aligned to Najib, as the government’s prosecutor in the appeal case has been a point of contention. Suffice to say that the need to take out Anwar from the equation was very intense in June 2008, as well as after the 2013 general election.

While September 16th did not happen – where Barisan MPs were supposedly to cross over to Pakatan’s side – Najib did force Abdullah to give up his Finance portfolio on 17th September 2008 and subsequently, upon tasting blood, forced Abdullah to commit to retirement during their meeting on 25th September 2008. Najib became Prime Minister on 3rd April 2009.

Anwar should be remembered for his commitment and love to Malaysia. Days before his acquittal by the High Court on 12th January 2012, Anwar told a Pakatan Rakyat Majlis Presiden (presidential council) meeting which I attended that he was not going into exile and would stay back to face prison. I was deeply touched. We were elated when he was acquitted.

Najib probably didn’t think he would do so badly in the 2013 general election. Post-election, he knew that the only way for him to win in the subsequent election is to kill the idea of an alternative Prime Minister and the singular Opposition Coalition. Through Indonesian Vice President Jusuf Kalla as go-between, Najib offered Anwar to join his cabinet in the hope to split Pakatan Rakyat, an offer which Anwar rejected and eventually paid the price with his freedom. Najib moved to isolate and take Anwar out from the equation and to lure PAS into UMNO’s fold, and to paint the political battle as one between UMNO-PAS the savior of Islam and the Malay race versus the Opposition that was purportedly dominated by “Chinese” DAP.

Anwar’s commitment and the future of Malaysia

By October 2014, after the fallout of the Kajang Move and an impending court judgement, I asked Anwar if he would consider doing a Thaksin Shinawatra – to leave the country – as I felt there was no point for Anwar to suffer another long jail term as he was not as young and as healthy as his first prison stint.

I was made to understand that at least a leader of an important Muslim nation offered him asylum. Anwar said he is committed to Malaysia and believed that he had no choice but to stay back to face prison so that PKR grassroots and the entire Opposition can hold its head high that they don’t have a fugitive leader but one that was brave to face any consequences for the struggle.

Malaysian politics can be very brutal and cruel. I felt very sad whenever I think of Anwar’s second imprisonment.

But maybe God has his plan in a mysterious way. The leadership void in the Opposition is filled by Mahathir through a grand reconciliation with Anwar twenty years after 1998, which many Malaysians, especially Malays, felt so relieved about.

If Pakatan Harapan wins power, the new government is as much a Mahathir government as it is an Anwar government. It is going to be a Reformasi government, of the people, by the people, for the people. I look forward to a better Malaysia led by the two political giants who turned foes and now reconciled as governing partners.

Previous PostTo hell and back : the Pakatan Harapan story
Next PostEven PAS can’t save UMNO