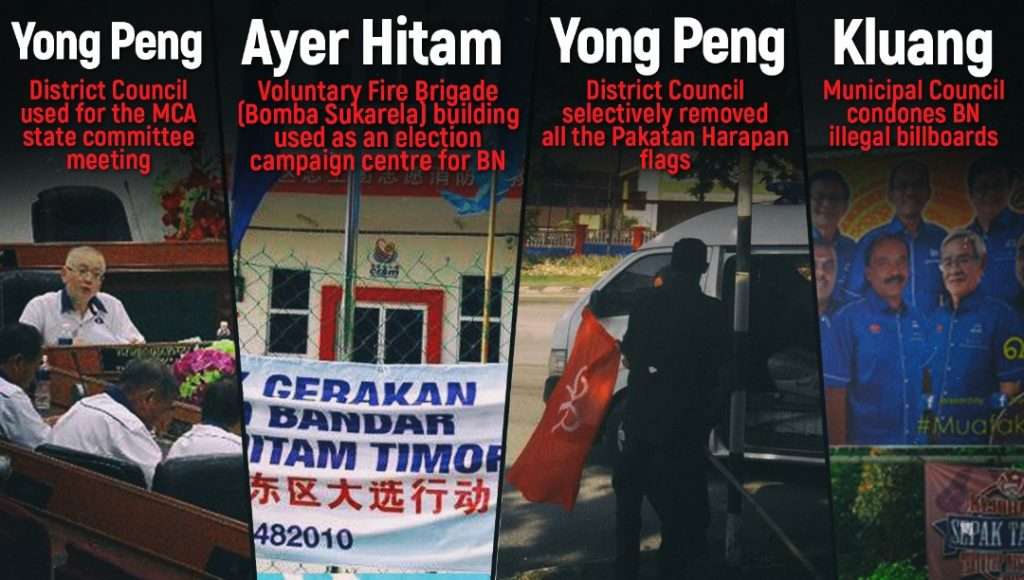 This morning, the Yong Peng District Council selectively removed all the Pakatan Harapan flags around Ayer Hitam town that have been put up just the night before. In stark contrast, the Barisan Nasional and PAS flags were untouched and were left free to be displayed at the busiest corners in town. Local government has been exploited by BN as a tool for politicking and being treated as part of the party machinery, creating another case of collusion between party and government bodies.

Of course, this is not the first time that BN is abusing government resources for their own benefit. Johor MCA liaison committee chairman Wee Ka Siong openly used the meeting room at Yong Peng District Council for the MCA state committee meeting. These meeting rooms are usually reserved for important internal meetings involving council matters. It is an dishonourable act for MCA, as a political party, to misuse the facilities of the Yong Peng District Council.

On the other hand, the Kluang Municipal Council, on numerous occasions, has rejected Pakatan Harapan Kluang Community Center’s application to hold events in the town, citing illogical reasons. These include our attempts to organise non-political activities such as children and family-friendly events.

That’s not all. BN set up 6 big billboards along the federal roads in Kluang and 3 of them feature MCA. The reply I received after I questioned this in Parliament was nothing less than shocking: These billboards are all not approved by the local council. BN didn’t even bother to file in the application to the Public Works Department, although it is required by law. This indicates that BN shows total disregard for the laws and regulations, worse still, it ignores the safety of road users altogether by causing traffic hazards.

Even though I have submitted the parliamentary reply on these illegal billboards to the Kluang Municipal Council for further action, the council remains silent. No action is taken and the billboards still stand tall at their original position.

I issued a statement yesterday questioning the misuse of the Voluntary Fire Brigade (Bomba Sukarela) building in Ayer Hitam, built using taxpayers’ money, as an election campaign centre for BN. Wee Ka Siong’s reply totally missed my point. Instead of answering my question, he beat around the bush and attempted to divert people’s attention by telling the history of the voluntary fire brigade team and pointing out their good work and contribution, which nobody is questioning.

Only upon pursuance by The Malaysian Insight, Wee Ka Siong claimed that MCA is renting the premise from the emergency relief team. This is an obvious attempt to cover up any evidence of wrongdoing. My biggest concern is that a publicly-funded building should never be used as any operation centre for a political party.

Wee Ka Siong owes the people an explanation on all the above cases where there is no clear separation between the roles, functions and resources of the government and political parties.

These situations where local government suppresses the Opposition but shields the ruling party have proven that BN treats government resources just like party machineries. BN component parties have the audacity to act as they please, misusing taxpayers’ money as party funds, treating district council facilities as party’s own and giving orders to civil servants as if they are party members. This is gross shamelessness.

Pakatan Harapan advocates for equitable funding from the government to both the ruling and opposition party for the smooth operations of the party and elected reps. All public facilities will also be available for rent by all parties and bodies without political interference.

When Pakatan Harapan forms the government, we vow to put such malpractice to a halt and ensure a healthy and level playing field for all political parties.