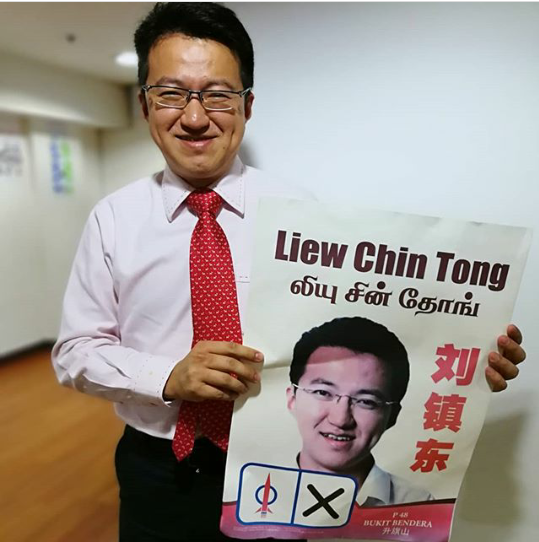 On this day a decade ago I was elected as a Member of Parliament for Bukit Bendera, Penang. It was the 12th general election that saw Barisan Nasional lose its two-thirds majority in Parliament for the first time, as well as losing Penang, Selangor, Kedah and Perak, on top of Kelantan, to the Opposition. Malaysia was never the same again from that day onwards.

When Parliament was dissolved on 13th February 2008, Barisan Nasional was fairly confident of retaining all states except Kelantan. The then-Selangor Menteri Besar Mohamed Khir Toyo was even planning to campaign for “Zero Opposition” for his state.

Instead, a political tsunami swept Malaysia. Many Barisan leaders including Khir Toyo lost power altogether. Perhaps it was the price of their arrogance. The Opposition which won only 19 out of 222 federal seats in the previous general election, managed to win 82 seats in GE 2008. It was the greatest ever swing.

On 1st March it was widely reported in the media that Barisan couldn’t decide on who would become the next Penang Chief Minister.

I found it strange that all the press conferences of Koh Tsu Koon in the second week of the campaign was a solitary affair in his office in Komtar as he was not flanked by any senior Barisan politicians. MCA leaders didn’t even bother to attend the launch of the Penang Barisan Nasional manifesto.

I detected a leadership crisis. Years later, Kah Choon told me that senior leaders didn’t talk to Tsu Koon for the rest of the campaign because they blamed him for the fiasco of failing to reach a decision despite having three CM contenders.

Tsu Koon cut a very lonely figure in the eyes of the media and public towards the end of the campaign. Morale and confidence on the BN side were very low.

On the Opposition side, the electoral pact sealed between Anwar Ibrahim and Lim Guan Eng on 9th January 2008 gave the impression of a formidable alliance with Guan Eng as the undisputed leader for Penang, should we ever come into office.

We didn’t even have to play down the possibility. With the exception of Lim Kit Siang, most DAP leaders didn’t believe that a change of government was possible. DAP had not been the first choice for voters since 1995. We went into the 2008 general election with only a single state seat in the 40-seat Penang state assembly.

Despite seeing the huge turnout and outpouring support from the public during the campaign, most DAP leaders were skeptical and kept telling themselves privately that Penang voters would not allow DAP to form the state government – hence DAP was probably going to do better at the Parliamentary level. Penang voters are quite good at splitting their votes.

The older members kept on telling us that on the eve of the 1995 general election, tens of thousands turned up at a ceramah in Jalan Macallum but DAP still lost terribly.

My friend Wan Hamidi Hamid, a Penangite who was then a journalist with the mainstream media in Kuala Lumpur, came to visit on 3rd March. We were in Tanjong Bungah and were stunned to see a lot of Malay fishing boats decorated with the DAP flag. A Police Special Branch officer who covered my campaign told me, “Nampak terbalik dah, Penang”.

On 5th March, Pak Lah attended a big event at Rifle Range, a significant part of the Bukit Bendera Parliamentary constituency. The next day I went to “comb” each of the thousands of flat units to feel the ground and see whether there was any change in sentiment. I was glad to note that that the Prime Minister’s visit had no impact on the people’s mood.

We made a major campaign decision not to hold the grand rally on 7th March but rather on 6th March to allow time for the impact to sink in before polling day. People were told to wear red.

A sea of red, estimated 60,000 people, turned up at the Han Chiang field. A sharp-eyed DAP stalwart Vincent Wu said he was surprised to see Malays who attended the event donating to DAP, something that was deemed very unlikely at the time.

Many of us felt the wind of change was in the air. It was electrifying. By 7th March, I was confident of us winning power in Penang.

Vincent and I spoke to Guan Eng that we must prepare ourselves for victory, however unlikely. With our Secretary-General’s consent, we rented a hall at Red Rock Hotel with the intention to hold a press conference in the event of formation of government. We also intended to “quarantine” the newly elected representatives at the hotel so that they would not be “kidnapped” by the other side; as such incidents had happened before in previous elections.

One of our leaders told voters to wear red to the voting booth. It wasn’t officially sanctioned but enough people heard about it. On polling day, seeing so many voters in red clothes queuing to vote was really comforting. It was also the first time the Election Commission used transparent polling boxes. Our polling agents sent me messages me that they saw through the boxes many more who voted for the rocket.

At noon, Yang Razali Kassim, a Singaporean scholar and former journalist, hopped into my car for a short ride in heavy rain. I told him I would win, probably with a 1,000 majority or slightly more. Eventually I won with a majority of 16,000 votes.

By 6.15pm, I was waiting at my beautiful heritage Bangkok Lane operation centre. I was probably the most optimistic person among the DAP candidates. As early as a year before, I was already arguing that DAP could win up to 12 seats in the State Assembly, even when we only had one seat at the time.

But even I was stunned when we received reports from our counting agents that our candidates had won Pulau Tikus (defeating Barisan’s CM-presumptive Teng Hock Nam), Padang Kota (defeating CM-presumptive II Teng Chang Yeow), Tanjong Bunga (Koh Tsu Koon’s former state seat), and won all state seats within the Parliamentary seats of Bagan and Bukit Mertajam.

It was dawned upon me that we were forming the Penang State Government, probably with a clean sweep.

It was a humbling experience. There was no sense of euphoria in me. I anticipated a long night to come, possibly a dangerous one.

In the next installment of this article, I will write about the longest night in Malaysian politics.