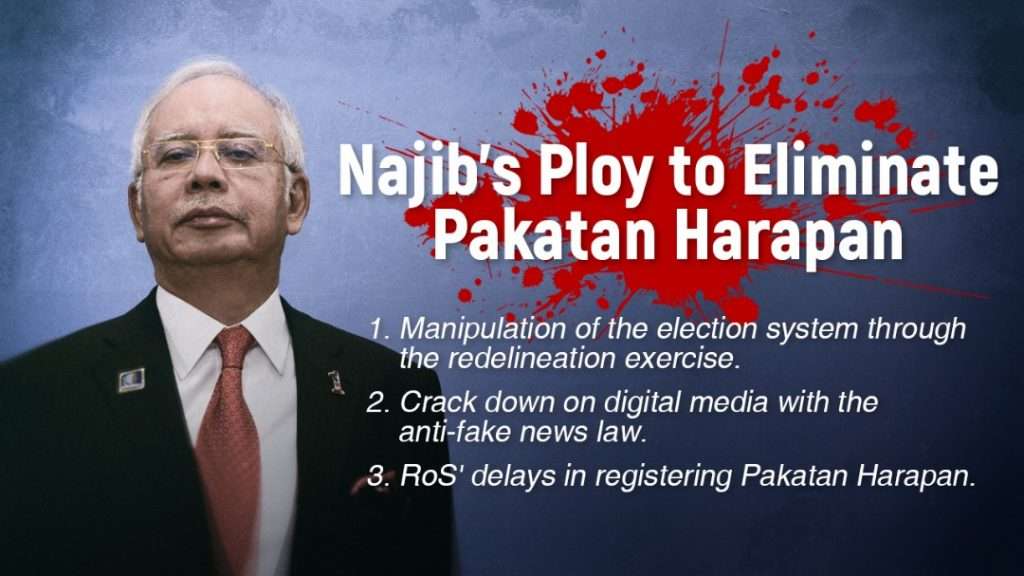 With plummeting popularity ratings, Prime Minister Najib Abdul Razak knows that he is losing public support and thus, he has been attempting to eliminate the opposition coalition since the 2013 general election. As the 2018 election approaches, Najib has three trump cards up his sleeve – the redelineation exercise, the Anti-Fake News law and the Registrar of Societies’ (ROS) delay in registering the opposition bloc.

MCA President Liow Tiong Lai, Deputy President Wee Ka Siong and Gerakan Penang chairperson Teng Chang Yeow have been slamming DAP for supposedly wanting to eliminate MCA and Gerakan, whereas, in fact, it is Najib who is going all out to eliminate the opposition from the Malaysian political scene.

After the GE13 debacle, Najib understood that if BN were to have a straight fight with the Anwar Ibrahim-led opposition again, BN would lose federal power. In order to vanquish the opposition, Najib tried to destroy the then-Pakatan Rakyat by taking Anwar out of the equation, luring PAS into UMNO’s fold and playing up the narrative that the opposition coalition was dominated by DAP and Lim Kit Siang.

But Najib did not foresee that 1MDB would be embroiled in such a huge scandal that eventually led to the split of UMNO. He also did not expect Dr Mahathir Mohamad to establish Bersatu and form a coalition with the other Pakatan Harapan parties, allowing the opposition to bounce back, emerging stronger than before.

With the naming of Mahathir as our candidate for the seventh prime minister, and Anwar the eighth, and the completion of seat negotiations for the 165 parliamentary seats in the peninsula on Jan 7, 2018, followed by the launch of our official manifesto – dubbed the “Book of Hope” / “Buku Harapan” – Harapan is set to take over Putrajaya.

In GE14, Najib will do his best to “steal” the election. And that is exactly what he is doing, with three dirty tricks in attempt to eliminate Harapan.

First, it’s the manipulation of the election system through the redelineation exercise. Should the new electoral boundaries with significant shifts be adopted, BN will win power by gaining 60 percent of the parliamentary seats with a mere 40 percent of the popular vote. Wong Chin Huat went even further to suggest that with 40 percent of votes, BN could govern with a two-thirds majority.

The redelineation report will be debated in Parliament this week and is expected to be passed by a simple majority. The upcoming elections will then be an uphill battle for Harapan, especially in the states of Johor, Selangor and Perak.

Najib’s second move is to crack down on digital media. The suspension of online news site The Malaysian Insight and various influential social media groups within weeks of the next general election can be seen as Najib’s bid to control and suppress online media. The Anti-Fake News Bill to be tabled in this parliamentary session may also be abused during the election as a weapon against critics and opposition leaders while masking BN cybertroopers’ spread of slanderous news online attacking Harapan.

The BN government is directly or indirectly in control of all mainstream media outlets but it is still fearful of the power of digital media. The fake news law is hence, created to block all currently available platforms for the opposition to reach out to the mass.

Thirdly, the Najib government is interfering in the work of the ROS to make things difficult for the opposition, including an ill-masked effort to deregister DAP and Bersatu. Since the era of Pakatan Rakyat, a decade ago, until the formation of Harapan today, we have been trying to register as a formal coalition and contest under a unified banner but the ROS never approved our application.

The result is an unlevel playing field where BN and Najib have all the power and resources to rig the elections. But without the people’s support, all these mean nothing. In the face of Najib’s dirty tactics to eliminate Harapan, we will need the huge participation of all Malaysians to turn the situation around and win this David vs Goliath battle. I call upon all Malaysians to come on board, using GE14 as the starting point for the renewal of our nation.

Previous Post8 March 2008: The winds of change
Next PostGE14: OUR FINAL BATTLE