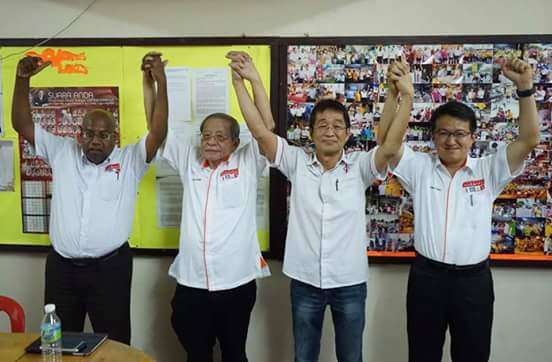 We want to express our gratitude to Sdr Pang Hok Liong who is willing to accept the DAP Central Executive Committee’s offer to contest in Labis, one of the pivotal Parliamentary seats in Johor.

He is not a newcomer, in fact he is a seasoned politician who is born and bred in Labis. Even as a practicing lawyer in Segamat, he visits his mother every weekend in Labis.

Sdr Pang, 61, was elected State Assemblyman for Bekok in 1990 at the age of 33. At the time, MCA president and MP for Labis was Dr Ling Liong Sik.

Sdr Pang, Sdr Wong Peng Sheng and Sdr John Lim Wan Show were among the pioneers who broke the ground and paved the way for DAP in Johor, a formidable BN fortress.

In 2013, Sdr Pang was prepared to contest in the Segamat parliamentary seat but at the eleventh hour had to make way for Chua Jui Ming of PKR.

After GE13, he continued his work serving the people. Sdr Pang did not have any plans to contest in GE14. In fact, he planned to campaign for a Pakatan Harapan candidate in northern Johor. Therefore, we are grateful that he is willing to fulfill the party’s request to stand for Pakatan Harapan in this GE.

As for me, I joined DAP in 1999, the year the party suffered a huge defeat. In 2000, DAP organised a leaders’ workshop. At that workshop I sat beside Sdr Pang. As an engaging storyteller, I enjoyed listening about his experience as an assemblyman, including his contact with the Royal family, and the challenges faced by a young lawyer in politics.

During his time as assemblyman, the Legislative Assembly did not limit the number of questions that you could ask, thus in that term, he has a recorded 600 questions in 5 years. He did his job well.

As a lawyer, he could perform well and give valuable input to the Johor State Assembly.

All DAP branches in Labis who had worked together with Hok Liong in the past elections still remember the fighting spirit of Sdr Pang.

They are happy with the announcement of Sdr Pang Hok Liong as the party’s candidate for the Labis parliamentary seat in GE14 and give confidence that they will be all out to win this election.

With the help of young party members and volunteers of all races, Pakatan Harapan has a fighting chance of gaining not only the Parliamentary seat but also the state of Johor, as well as Putrajaya.

Previous PostWHO WANTS TO ELIMINATE MCA? COULD IT BE UMNO?
Next PostStop using government resources for GE14