How BN can learn to be an effective opposition 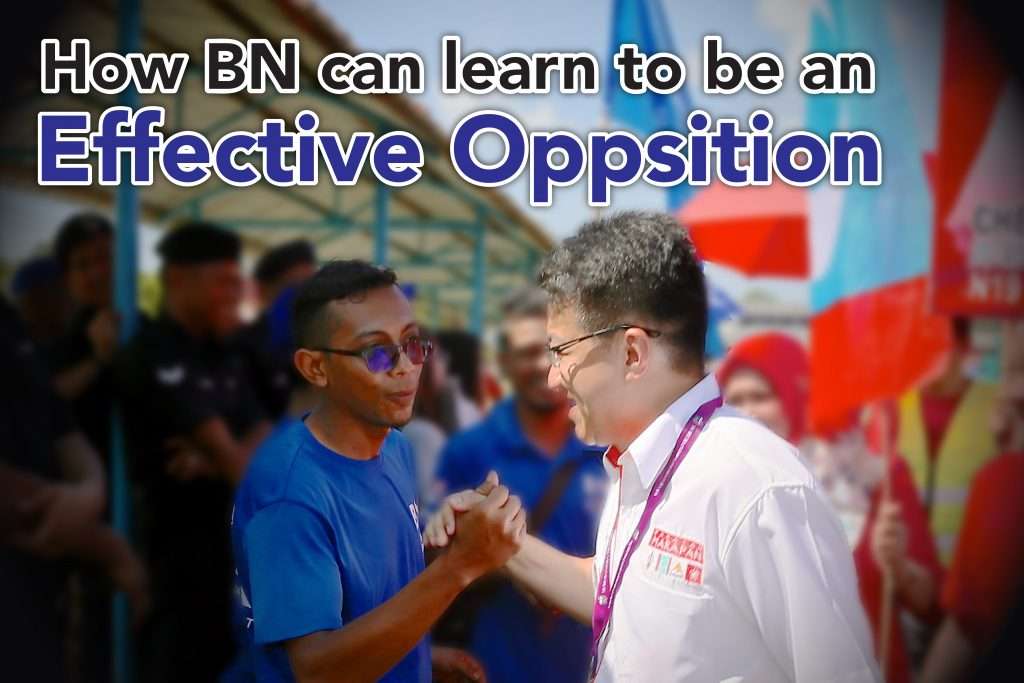 I would like to thank the voters in Lam Lee, Yong Peng, who have voted overwhelmingly for change on 9th May 2018. While I did not win in Ayer Hitam, we won together in Johor and nationally. Malaysia has won!

The most important achievement on 9th May is that from now on Malaysia becomes a full-fledged democracy in a very peaceful manner without any chaos or bloodshed. Despite collectively voting for Pakatan Harapan, some people were still worried that the transition of power wouldn’t be smooth and peaceful.

In all previous elections, the fear factor and the threat of violence should BN lose were among the arsenal of Barisan Nasional. People used to fear the former BN government. In the new Malaysia, it is the government that must fear the people, not the other way round. That’s the essence of democracy.

The struggle of Democratic Action Party and Pakatan Harapan is not just to win power. Our struggle is about making democracy work for everyone, including for the Opposition.

Pakatan Harapan aspires to be a government for all, including our political opponents. For example, the Johor Pakatan Harapan Government, via a statement by Menteri Besar Dato’ Osman Sapian, has committed to give RM50,000 annually for operations of officers and hiring of staff by all Johor state assemblymen, regardless of parties.

For democracy to work, we need a credible opposition. To be a worthwhile opponent, BN must deal with three fundamental challenges.

First, UMNO-BN must disassociate themselves from the legacies of kleptocrat Datuk Seri Najib Razak.

Najib and his wife Rosmah Mansor have been a toxic factor for the former government, at least since July 2015. With the discovery of bags of cash, jewellery, and branded handbags in Kuala Lumpur; these are merely the tip of the iceberg.

To have Datuk Seri Zahid Hamidi and Datuk Seri Hishammuddin Hussein as the new leaders of UMNO won’t do much to salvage BN’s reputation. They are still associated with Najib’s legacies; and for UMNO to claim the RM114 million cash seized from properties related to Najib belongs to the party, it has shown the absurdity of the current UMNO leadership. It will be difficult for them to make a comeback for the 2023 general election.

Second, “Malaysia Baru” is defined by the common pursuit of change by all ethnic groups on 9th May 2018.

The “camaraderie in adversity” that we all shared in our struggle against the Najib kleptocracy and the collective suffering, humiliation and persecution we faced will continue to guide and shape our politics in time to come. Despite Najib’s propaganda machine trying very hard to project a “Malay versus non-Malay” narrative, Malaysians triumphed over their racial politics. Bangsa Malaysia prevails.

Some BN leaders are now mulling a multiracial future but I don’t know if they have the political will to pull it through. I don’t deny that there are also elements in the society who are hoping to create a “Donald Trump backlash” by whipping up racial sentiments among those who are economically left out. We have to be aware of this possibility. I also don’t deny that there are those who may want to create an Indonesia’s “Ah Hock” situation by whipping up religious sentiments.

Yet I’m confident peace and harmony will prevail. The reconciliation between the two political giants Tun Dr. Mahathir Mohammad and Datuk Seri Anwar Ibrahim, the sense of common purpose and destiny in the recent election that was felt by all, and hopefully an economic policy framework that favours ordinary Malaysians, would help build a common Malaysian future.

The average age of Pakatan Harapan candidates and elected representatives are younger than those fielded by BN in GE14. The irony was that the DAP, which UMNO accused as a Chinese party (of course we are not), has fielded more Malay candidates who are below 40 years old than UMNO itself. Even the UMNO Youth deputy chief was not fielded because Najib wanted to keep the old UMNO warlords. Najib also feared Youth Chief Khairy Jamaluddin’s influence.

As the Opposition, it will be even harder for UMNO-BN to attract the young generation to their side, given that the Malaysian political tsunami on 9th May was also the rise of the youth.

In fact, I would like to propose to the Pakatan Harapan Government to implement various reforms to the electoral system as recommended by BERSIH, civil society groups and the bi-partisan parliamentary select committee on electoral reforms of 2012. One of the important proposals was to bring down the voting age to 18, in line with international practice. The more youth participate in election, the harder it will be for the ageing BN to make a comeback.

Having said this, Pakatan Harapan must not rest on its laurels. The new Government must remember that Malaysians no longer fear the government of the day, and they know that a change of government will be peaceful. They are no longer afraid to make change.

Each congratulatory message from ordinary Malaysians that I received since 9th May sounds like this: “We are very happy that Barisan Nasional is out, please run the country well, or else we will vote you out”.

We must always be reminded of the Canadian election of 2015 which brought Justin Trudeau’s Liberal Party into office. Liberal Party was the third and significantly smaller party in the political scene before the election. Perhaps if Khairy Jamaluddin quits UMNO and forms a new multiethnic party, it will keep Pakatan Harapan on its toes; and that will be good for the people.