ECRL and HSR cost too much and mean very little 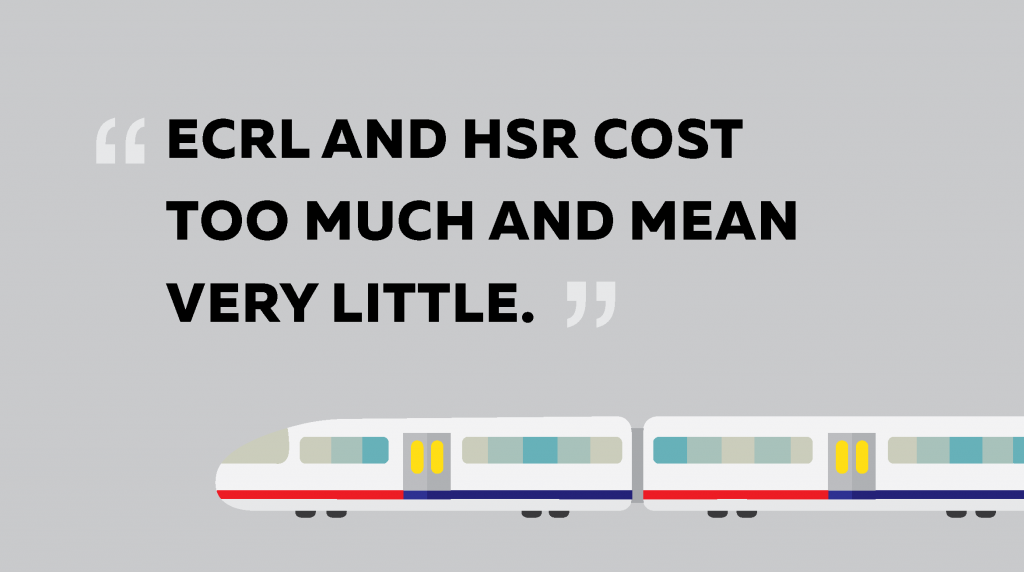 Why I opposed ECRL and HSR

As one of the very few politicians who had opposed to both ECRL and High Speed Rail since the projects were mooted several years ago, I would like to set the record straight why from the beginning I thought these projects cost too much and mean very little as far as connectivity and even regional strategy are concerned.

ECRL was never in any serious transport planning and it was hastily implemented without open tender.

Former Prime Minister Najib Razak mooted the idea of a KL-Singapore High Speed Rail in 2010 but Singapore only agreed to the idea in 2013, after much persuasion.

As HSR involves Malaysia and Singapore, the Najib government was unsure if the project would eventually go to a China contractor. Japanese, Korean and French contractors were also interested.

Malaysia originally hoped that HSR would begin work in 2014 and be completed by 2020.

In the last days of December 2015, Najib suddenly announced that the main station of HSR – Bandar Malaysia – would be given to a Chinese corporation. I put out a statement then stating that such arrangement was unfair to other bidders of HSR. The Bandar Malaysia deal fell through in May 2017.

As the HSR project moved too slowly and involved international bidding as well as joint decision with the Singapore government, out of the blue the Najib government announced the ECRL project in 2016.

Works commenced in August 2017 with no open tender and no scrutiny.

When ECRL was proposed, the Sarawak Report alleged that the stated cost was nearly doubled that of the actual cost and it was suspected that the differentiation has something to do with 1MDB; there was no plausible explanation from the Najib government to address this.

When I opposed to the ECRL project in early 2017, MCA and some Chinese media attacked me for being “anti-China”.

I told those who were concerned that such attack won’t gain MCA any votes as all Malaysians, ethnic Chinese voters included, are against anything that is financially suspicious and that is somewhat linked to 1MDB.

The GE14 results show that I was right. Dr. Mahathir was just acting on the Malaysian public sentiments when he cancelled the ECRL project.

I urge MCA Deputy President Wee Ka Siong to save his precious time and not flog a dead horse. The ECRL project is gone. To oppose to the ECRL project doesn’t mean that one is anti-China.

It is only when history is fully unveiled or when Najib or Jho Low confesses, that we will know exactly why the Chinese contractor plunged into the ECRL project despite knowing that it is a railway leading to nowhere.

My guess is that the Najib government and its agent sold to China the story of a variant of the “Kra Canal” fantasy amidst China’s unease with Singapore’s close ties with the United States.

The Kra Canal idea doesn’t make any economic sense as it would only take a maximum of three days to cross the Straits of Malacca to enter South China Sea. Peninsula Malaysia is no Cape of Good Hope, where the size of the continent justifies the Suez Canal.

In the case of ECRL, on top of the short travelling time required for shipment from Malacca Straits to enter South China Sea, if the train mode is involved, unloading and re-loading goods from ship in Port Klang to train and from Kuantan Port to ships again would take many more days. So logistically it doesn’t make sense.

However, the East Coast deserves better rail services, which can be done through double-tracking and electrifying the existing Gemas to Tumpat line.

To link it better, there can even be a line from Kuala Lumpur to Mentakab, tunnelling through the centre spine, to link to Gemas-Tumpat. In the larger scheme of things, Tumpat can also link to Thai part of the Pan Asia Rail Link.

Likewise, the passenger-only High Speed Rail from Kuala Lumpur to Singapore would never generate the sort of traffic like that of HSR between Beijing and Shanghai. I have doubts if HSR can even generate income to pay for operations not to mention to have returns on investments.

What we really need

What China and Malaysia should explore is to return to the idea of a Pan-Asia Railway linking Singapore to Kunming.

For Singapore-Kunming to work, expanding the rail network in Malaysia is certainly a good idea. But it should be one that carries goods and not just passengers, as there will never be an HSR that is faster than flying from Kuala Lumpur to Beijing or Shanghai. Having a freight train from Port Klang to China is a realistic and viable alternative to passage through South China Sea.

In short, ECRL and HSR, proposed by the previous government, make no economic and strategic senses, and should be cancelled and refashioned around the idea of Pan-Asia Railway by all parties involved for the greater common good of Asia.