Beyond US-China tensions: What else can the rest of us do? 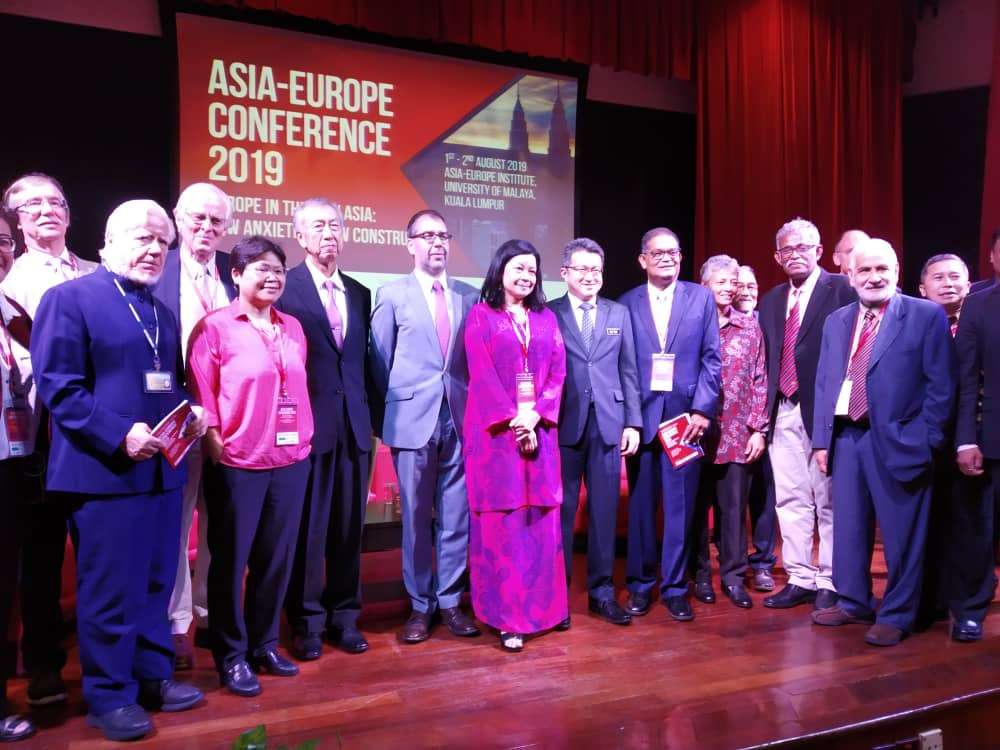 It is my honour to speak to the Asia-Europe Conference 2019 and I am especially delighted to return to Asia-Europe Institute, University of Malaya. I studied here in 2005-06 for which I received my Masters of Regional Integration.

I accepted this invitation in part because it came from Professor Tony Milner. Apart from being a great academic icon for those who study the history of the Malays, Tony was the Dean at the Faculty of Asian Studies at the Australian National University when I did my honours degree.

In New Malaysia, there is a need to invest more in institutes like the Asia-Europe Institute to help us better understand and engage the region and beyond. It is my wish that Kuala Lumpur can now become the regional knowledge hub on regional studies.

The Conference’s theme “Europe in the New Asia: New Anxieties, New Constructs” is apt and timely. We need a conversation about Europe and Asia in the new scenarios that the world is in now.

Nowadays in every conference on international relations, one can’t run away from talking about the relationship between the United States and China.  Worse still, people just want to talk about the US-China relations and nothing else.

So, this conference is an exception: we will talk about what else can the rest of us do.

When we know two trains are on a collision course, there are quite a few things the rest of us can do, depending on the situations. We can run away to avoid getting caught in the mess. Or we can take charge of the station to guide the train drivers, so that there may still be a chance to change course. And there are other alternatives too.

Asia today is very different from the Asia in the past. There is a new Asia, as the topic of this conference suggests, emerging from the post-colonial era and post-Cold War period, whose people are increasingly global in outlook and demanding a voice and identity of its own. Likewise, Europe has also undergone many changes. Globalisation and migration has in a way brought the rest of the world to your doorstep. Today’s Europe is much more multicultural, to the extent of what Europeanness entails is being questioned altogether.

Europe is not new to Asia. European powers were exploring, exploiting and colonialising Asia up until the end of World War II. Along the way, Europe also defined Asia. Indeed, our idea of Asia or even the boundaries of post-colonial Asian nation-states were originally European inventions, such as the boundary of modern Malaysia and Indonesia being the line drawn between the Dutch and the British in 1824.

Post-World War II saw the dominant presence of the US everywhere, including Asia while Europe very much retreated to home ground. But we are now in yet a different world. Thirty years on from the fall of Berlin Wall in 1989, which saw the stall of the influence of USSR and its communist allies, this year marks the final end of a unipolar world where US hegemony once ruled. The competition between the US and China is increasingly a mid-to-long-term feature in international relations, beyond election cycles and partisanship in the US.

As we speak, Europe faces multiple crises. Brexit is looming. There are doubts and questions of legitimacy on the super-national power structure of the European Union. There is an economic crisis of failing to create sufficient jobs across Europe since the Global Financial Crisis 2008.

By and large, the EU project has preserved peace in Europe and provided a complex and elaborate platform for international cooperation never seen before.  For ASEAN in particular and Asian nations in general, there are so many things we can learn from Europe to institutionalise international cooperation. Asia is of course so much more diverse than Europe thus a straight-jacket institution may not be the best option.

First, cooperation doesn’t need to restrict to merely trade and defence. There are many areas Asian nations can work with each other as well as with Europe.

Second, I am of the view that we need to “resurrect” the notion of Asia. ASEAN Centrality is great, and as long as ASEAN gets its acts together, it is a great power house. But Asia the label is something that we shouldn’t lose either.

I am particularly concerned that after a while, Asia is just known as Indo-Pacific, South China Sea, Taiwan Straits, Korean Peninsula, etc. My point is, Asia shouldn’t be reduced to just potential conflict zones.

While Asia was a colonial idea, it was actively embraced from the late 19th century onwards to become a very potent identity by Asians, e.g. Jose Rizal, Sun Yat Sen, etc. In time of great power competition between the US and China, it is even more pressing that Asians must rise to reassert this idea so that there is a framework beyond the military construct of others.

Along with the rise of China, we also see a realignment of power of sorts happening in the world stage. On the one hand we have China and Russia strengthening their strategic partnership bilaterally and also regionally via mechanism such as the Shanghai Cooperation Organisation. On the other, it is the construct of the American-led “Quad” and Indo-Pacific Strategy.

Herein lies the new scenarios we are in, with new anxieties and the need for new constructs.

Somehow most people are focusing on the US and China, as if we will enter into another Cold War, and as if it is a binary choice, and each and every one of us would have to choose side between the two.

It doesn’t have to be so.

The Cold War was to a large extent ideological. Today, even North Korea is increasingly living a materialistic existence albeit not capitalist, just yet. The then US and USSR were two unconnected and largely parallel production systems. The world doesn’t work in such a way now.

What I am trying to say is that there are so many more stakeholders in the international order now compared to 1948. Each has its agency and many are reasonably rich. ASEAN is the 7th largest world economy while the EU economy combined is of course very big.

As Professor Amitav Archaya so succinctly expressed, we now live in a multiplex world where states and non-state actors are bound together by a broad and complex form of interconnectedness and interdependence.

The world is not just about the US and China, and therefore European and Asian nations have to rise to the occasion to fill the gap, and hopefully emerge to lead as middle blocs. We need to look beyond the big power dynamics and start exercising our agency in order to shape world events.

There is a huge gulf between the US and China, and unfortunately increasingly so. The US under Trump presidency is seemingly running Asia via the 7th Fleet, and not its State Department. The Indo-Pacific Strategy, while noble, gives the impression that it is a military strategy rather than a comprehensive one which combined security with development like the Marshall Plan.

On the other hand, China seems to have yet to fully grapple with the fact that to be an effective great power that can do more good rather harm, it must realise that even the slightest action on its part might bring a huge impact, if not huge anxieties to the smaller neighbouring states. China must also be able to appreciate the diversity of Southeast Asia, not just culturally but also politically and socially.

Many middle power countries often felt trapped in face of the two seemingly competing constructs in the form of the Indo-Pacific Strategy, and the Belt and Road Initiative.  Many have come up with their own iterations of the Indo Pacific strategy. ASEAN for example has cleverly integrated both strategies into the Indo-Pacific Outlook which stressed on the importance of integration and cooperation between regions, enhancing dialogues and connectivity, while insisting on the principle of ASEAN centrality.

Now, allow me, as the Deputy Defence Minister, to say a few words specifically on Malaysia.

Malaysia is situated at the heart of this New Asia construct. We are a maritime nation with continental roots linking Pacific Ocean and South China Sea on one side to Bay of Bengal and Indian Ocean on the other side, while also connected to the Eurasian continent by land.

The notion of Tanahair (homeland) beautifully expressed that there’s a water and land element to our nation. This is particularly significant in this era of connectivity, a potential that the proposed Singapore-Kunming Rail Link may be able to unleash.

Just as how Malaya was the first destination for European powers during the colonial era, we now want to exploit our geographical advantage to position ourselves as the regional hub. Of course, our geographical reality is both a blessing and a burden as it also means that we are facing a wide range of security challenges, hence the importance of getting our regional outlook right and take appropriate steps to address our structural gaps.

Ever since the new government came into power, we have seen the return of Dr Mahathir Mohamad’s foreign policy, in which Malaysia adopt an activist neutrality posture to punch above its weight and pursue our agenda. It is a New Malaysia that not just conduct foreign policy in a transactional nature but based on a set of self-dictated values. It is also a New Malaysia that is neither pro-US nor pro-China, and it is one that is keen to work with other middle powers such as the EU, Japan, Turkey, India, etc.

Indeed, our world is not based on competition alone but also cooperation. Will we be able to forge a new Asia-Europe partnership that can pave the way for a stronger middle ground? In the increasingly divisive big power play environment, there are a lot more the rest of us can do, and we need to do it urgently now more than ever.