Malaysia’s Role in Promoting Peace and Stability in the Region 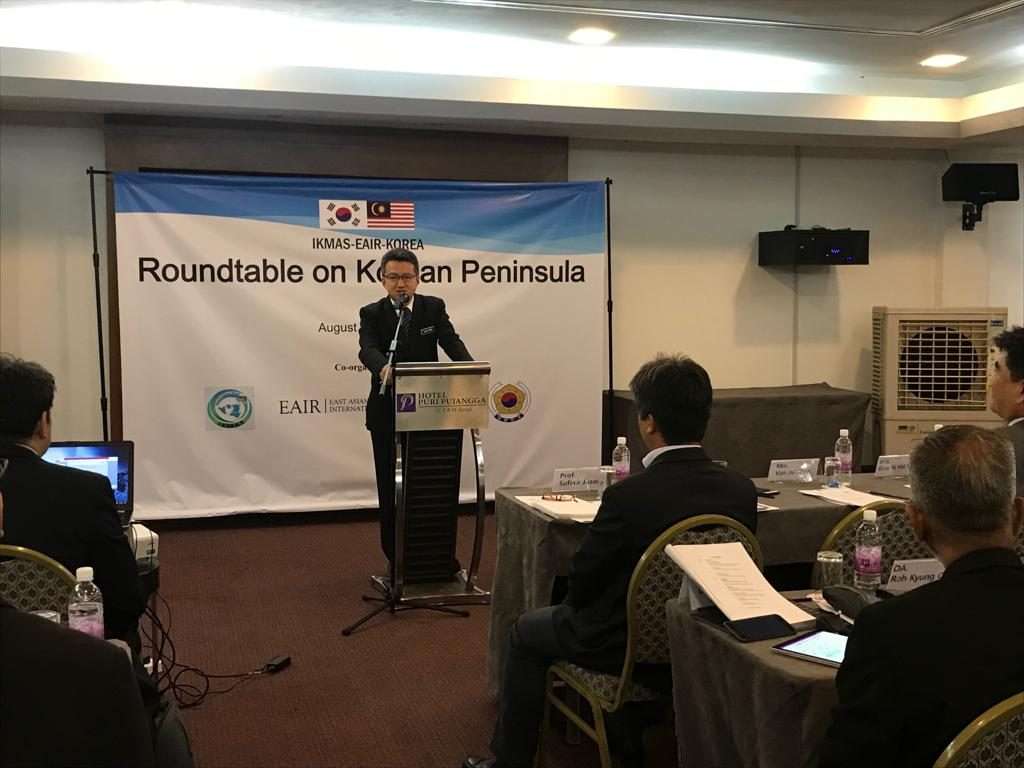 Thank you for inviting me to speak at this roundtable. It is my fervent hope that to see Malaysia, esp Kuala Lumpur, develop into a knowledge centre for regional studies, with great convening power for ideas, so that we can deepen our understanding in each other’s region.

As we gather here to discuss the region that has been on everyone’s mind, stability in the Korean peninsula is indeed precarious at this juncture. Not only we have reports of North Korea firing short range missiles, the relations between Japan and South Korea is also at an all-time low. These, in addition to the already complex recent developments in the region, is indeed unsettling.

The issue in Korean peninsula has had a long history, and it is understood that it won’t be resolved in a short matter of time. President Trump’s “Summit Diplomacy” with Chairman Kim Jong Un, of which President Moon Jae In also played an instrumental role in,  has offered a short-lived hope that a breakthrough will finally arrived, but as we know, not much headways even after the three summits that have taken place.

We have to contend with the complex evolving security environment in the region today which involves multi-faceted power plays. Trump and Kim aside, how China under President Xi Jin Ping plays its role in handling North Korea make significant difference. This also means that the developments in Korean peninsula also hinges on the dynamics between the countries involved, in particular between the US and China. With the current US-China trade war, a decoupling may occur in the security realm as in the economic realm. Developments in other issues such as Hong Kong, Taiwan Strait, and Chinese perception on US’ Indo Pacific Strategy as a containment strategy would also affect Chinese attitude towards Korean peninsula affairs.

Likewise, the relationship between South Korea and Japan, if not handled well, will also have negative impacts on the progress on North Korea.

Southeast Asia has always watched the development in Korean peninsula and Northeast Asia closely. Needless to say, instability in Korean peninsula will gravely affect our peace and prosperity. Malaysia experienced first hand being used as an illicit transit destination to bypass sanctions, discovered in the aftermath of the gruesome assassination of Kim Jong Nam at KLIA 2.

More so, Southeast Asia shares the same fate as Northeast Asia in the sense that we also run the risks of becoming a center stage for big power contestations. Southeast Asia, and Malaysia in particular, is situated at the heart of Asia, and is the bridge between the Pacific Ocean and Indian Ocean linking the trade routes from east to west. Yet the territorial disputes in the South China Sea also led to tensions and risks of escalations that we have to manage from time to time, albeit to a lesser extent than the Korean peninsula. Southeast Asia does not want to choose between China and the United States, not unlike, I believe, how South Korea does not want to choose between the US and Japan on the one hand, and China and Russia on the other on the issue of North Korea.

Since assuming office, President Moon has been pursuing a reconciliatory tone towards North Korea, vowing to achieve reunification by 2045. That, together with  New Southern Policy, is a testimony to South Korea’s tenacity as a middle power. Even though South Korea remains an ally of the United States, it does not always agree with US position particularly the hardline position taken by President Trump. We are in a post-post Cold War era, where the US is no longer the hegemonic superpower at the peck of the world order. I truly believe that in this geopolitical climate, it has never been so important for middle size countries to work closer together and exercise our agency vis-a-vis big powers.

Of course, defusing a ticking time bomb like North Korea would take more than a one day conference. I nonetheless believe that this is a great initiative to facilitate academic exchanges between Malaysian and South Korean scholars. We need to understand each other’s region better – Southeast Asia must not be viewed as a uniform entity, but the nuances and dynamics within and between each countries must be understood – likewise, we in Southeast Asia must also strive to understand each individual countries in Northeast Asia better. In that regard, I would like to record my sincere thanks to the Embassy of the Republic of Korea, IKMAS and  EAIR for making today’s roundtable possible, and I wish all of you a fruitful day ahead.