Defending a Maritime Nation: Whither the Future of MAF Joint Force 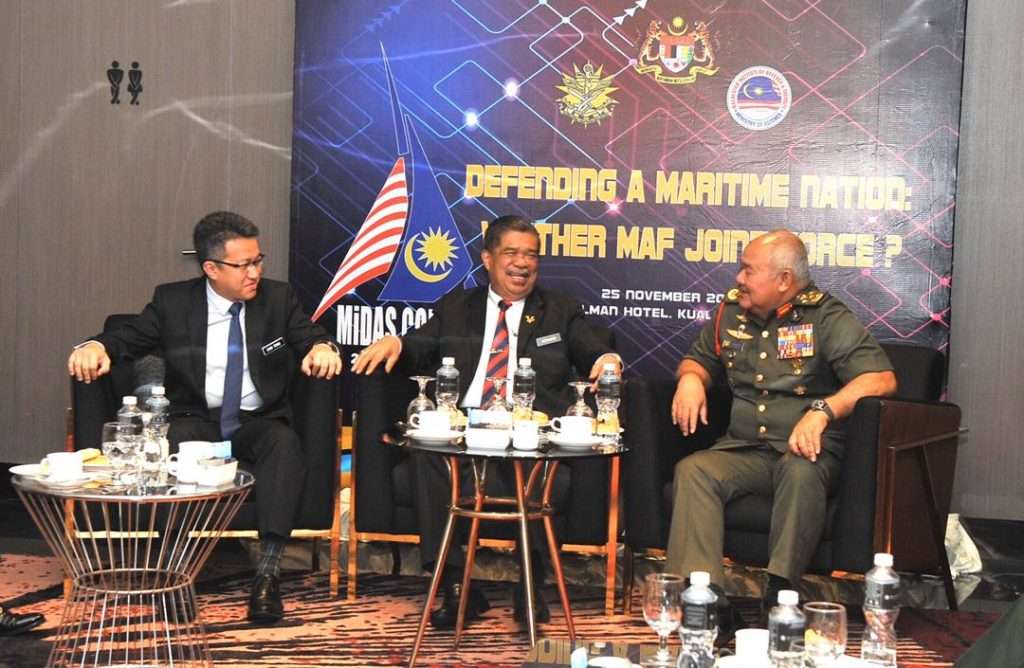 Let me begin by congratulating MIDAS for the success of organizing this MIDAS conference. I have had the chance to follow some of the discussions today and I can attest that the discussion earlier was indeed of high quality and very relevant to the question of the security of our nation’s future.

As you are all well aware, Malaysian government through the Ministry of Defence has produced our first ever Defence White Paper, which is scheduled to be tabled in Parliament next week on 2 Dec 2019. I would like to thank the drafting team, many of whom are here today, for the hard work that you have put in over the past year.

As we celebrate this landmark achievement, it is also important to bear in mind that this is only the beginning. The real work has only just begun. Many reforms that have been identified in the white paper will require our diligent effort to ensure that it is properly implemented in order to achieve the aspirations we set out for ourselves.

To that end, it is imperative that we work together in a whole-of-government fashion and move ahead in jointness. In the military sense, the demarcation between land, sea, air and cyber domain is increasingly blurred and requires joint operations. This was case clearly illustrated by the Lahad Datu incident – with the coastline of Sabah alone around 1,400 km spans over seven district in the Eastern Sabah, it is impossible for any enforcement agency to work in silos. Globally, joint commands is also increasingly becoming the trend.

The same is true for our national thinking too. Our country has been blessed with peace, but this has ironically made us complacent about our security situation, to some extent. Security concerns have never factored much in the minds of our society, especially in the post-Cold War era after the fall of the Berlin Wall and the post-Communist era with the signing of Hatyai Accord in 1989. For instance, urban planners in this country don’t seem to factor in wars, terrorist attacks, climate emergencies or any crisis situations that require mass evacuation in their planning. If they do, they would not push for military camps to be shifted away from cities. I have openly said that I am against land swaps that move urban camps to far flung places because our future challenges lie in where the population is.

In this regard, I believe that MIDAS has an important role to play. As the think-tank of the Ministry of Defence, it must serve as the honest and constructive self-critic of the government, and be at the forefront of strategy thinking while helping MINDEF as well as other agencies to go forward in embracing new, innovative ideas and ways of thinking. As the leading Track II institution on defence issues, MIDAS also plays a crucial role in our defence diplomacy effort with other countries, facilitating more frank exchanges of views with our external partners that are sometimes not possible at the official level. MIDAS must be proactive in building networks with leading think-tanks in the region and serves the window to communicate to external partners and the public.

For a think-tank to succeed, its most important element is the people in it. I truly believe that we must invest in our people and build a generation of researchers who will go on to become experts in their various subject matters. There should be a constructive “revolving door” mechanism where this pool of talents can move across between government, think-tanks, teaching colleges and universities so that we create synergy between these institutions and build people-to-people ties. One of the proposals put forward in the White Paper is to create a security cluster, where the civil servants that are trained in international affairs and security issues will serve in a close service and rotated among the security-related agencies such as MINDEF, Ministry of Foreign Affairs, Ministry of Home Affairs and National Security Council. It is important to retain this pool of talents and with them the institutional memories and the depth to understand the complexity of security challenges.

In similar fashion, I also believe that there should be more exchanges between the military and the civilian in MINDEF. One of the suggestions that I put forward was for a military module to be introduced to new civilian staff in MINDEF, so that they can have a firsthand experience of the challenges faced by the military, which I think will be very valuable as they move on to positions where they make decisions that will have an impact to the boots on the ground.

Defending the nation is everyone’s responsibility. Instead of lamenting the lack of awareness among the public, the onus is on us to communicate better to the public on how defence matters to them. Taking cue from the White Paper, let us all put our heads together on the most effective ways to communicate the key ideas, such as the notion of maritime nation, jointness, HANRUH to the public, and I hope that some of MIDAS activities next year can be structured with this goal in mind. Think of yourself not as a convenor of events and conferences, but as a convenor of ideas and a thought leader. It is only through cultivating a whole-of-nation  consciousness about security and defence that we can move forward as a peaceful, sovereign and prosperous nation.

With that I thank you for your presence today, and declare the conference closed.