The Center is Holding 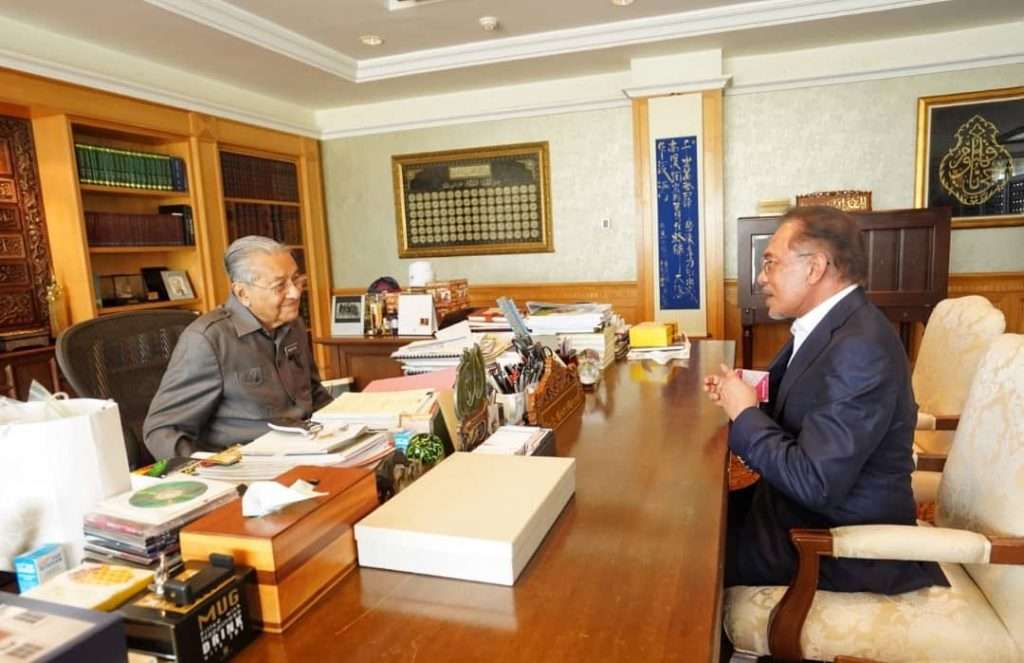 Having been a keen student of history and an active participant in the nation’s politics for some time already, I sensed a historic turning point was reached in the statements by Datuk Seri Anwar Ibrahim on 13th February 2020 and Tun Dr. Mahathir Mohamad on 14th February 2020.

Finally, clarity is emerging on the question of leadership, and that should go a long way in setting everything else in proper order.

Dr. Mahathir and Anwar met on 13th February and agreed upon Dr. Mahathir handing over the premiership to Anwar after the Asia Pacific Economic Cooperation (APEC) summit.

When asked by the press, Dr. Mahathir confirmed Anwar’s account of the gist of the meeting and also reiterated that while there were leaders attempting to alter the situation, for example, by enlisting the support of UMNO and PAS, he was not involved. In jest, Dr. Mahathir said there were people trying to get him to lead for another 22 years, despite him approaching his 95th year.

The alignment in 2017 between Dr. Mahathir and Anwar, as well as the forces aligned to them, was not something easily achieved. It could be done because it was necessary and essential for the removal of the kleptocratic government of Datuk Seri Najib Razak.

Najib had taken Anwar out of the political equation by sending him to prison on 10th February 2015. He assumed that removing the opposition’s prime ministerial candidate and bringing PAS to his fold would assure him of victory in the general elections. In Najib’s racial calculus, selling the idea to the Malay constituents that the Pakatan coalition was in fact dominated by the DAP would be sufficient for him to win, almost by default.

In 2016, Dr. Mahathir changed the political equation by doing the improbable, the incredible, the unthinkable:

The alignment between Bersatu and the original Pakatan parties (PKR, Amanah and DAP) was a grueling experience that took more than a year to complete. This was mainly for three reasons:

First, the collective mistrust and antipathy of the original Pakatan parties towards Dr. Mahathir and, to a certain extent, vice versa, was a serious hindrance;

Second, because Najib, UMNO and PAS were painting the DAP as the bogeyman to scare off Malays from supporting Pakatan, a lot of courage was needed from everyone in Pakatan to accept the idea that an expanded Pakatan was the most promising path to electoral victory;

Third, some Pakatan leaders did not really believe that a multiethnic coalition that included the DAP could overcome racist onslaughts from PAS and UMNO; and thus they sought to forge a coalition with PAS despite strong evidence that PAS was already working in concert with UMNO.

To his credit, Dr. Mahathir was already advocating full alignment with Pakatan as early as November 2016 when other leaders in Bersatu were still toying with the idea of founding Barisan Rakyat as a Bersatu-Pakatan joint entity. No doubt Bersatu and Pakatan did ink a Memorandum of Understanding in December 2016, but the thinking on the part of Bersatu leadership was still not conclusive.

By February 2017, Tan Sri Muhyiddin Yassin and Datuk Seri Mukhriz Mahathir came to the conclusion that there was no point in talking to PAS anymore. They agreed for Bersatu to come into full alignment with the original Pakatan parties.

After Bersatu officially joined Pakatan on 27th March 2017, the coalition took another four months to decide on formalising a Mahathir-Anwar joint leadership setup. This happened on 14th July 2017. I think of this as a major turning point in Malaysian history. Months of negotiations followed, and on 7th January 2018, Pakatan could finally announce that Dr. Mahathir would be the candidate to become Malaysia’s 7th Prime Minister, and Anwar would be the 8th Malaysian Prime Minister. It was this agreement that paved the way for eventual electoral victory.

The projection of Mahathir and Anwar as 7th and 8th PMs respectively was officially mooted at the Pakatan retreat held on 1st and 2nd December 2017. Although one faction in PKR was opposed to the idea. Anwar did not. Instead, he set the condition that PKR would contest in more seats than Bersatu on the Peninsula. This, he felt, was necessary to protect PKR’s political interests and to fend off accusations from internal rivals that he was selling out.

No date was set for a transfer of power from the 7th to the 8th Prime Minister.

Negotiators from the four parties spent long days and nights until 6th January 2018 to stitch a deal together. At 6p.m on 6th January, there was still no deal. Of the 165 parliamentary seats in the Peninsula, there was a deadlock in negotiations on four seat. The understanding was that if no deal could be reached that day, the Pakatan convention planned for 7th January would not proceed. Had that turned out to be the case, the history of the country would have gone down a totally different path.

Fortunately, at 8p.m on 6th January, a deal was reached. Amanah agreed to make key sacrifices.

As a participant at each juncture of the development described above, I do believe that when it comes down to the crunch, the leaders involved would choose the best course for the nation. The nation comes first. For instance, one very honourable man is Tan Sri Muhyiddin Yassin. He was former Deputy Prime Minster and he could have insisted on being the prime ministerial candidate. But understanding that a Mahathir-Anwar joint ticket was crucial to the alignment between Bersatu and the original Pakatan parties to have maximum impact, Muhyiddin had very early on (around mid-2017) made known to many that he did not want that role. What he wanted was simply for Pakatan to win and to defeat Najib. For this, I hold great admiration for Muhyiddin.

Following the May 2018 general elections, the leadership was bogged down by the daily chores of governing. Very few could explain to the public that Pakatan Harapan is a coalition of impossible allies and of former sworn enemies who had come together to rise to the needs of the nation. They had been putting nation above self, duty above personal interests.

All in all, the Pakatan parties were far from effective in making supporters understand the new form of coalition government that Pakatan  Harapan amounts to. It is in fact, a very young coalition. More than that, it is more like a corporation with four stakeholders, each owning 25 percent of the shares. Keeping various individual ambitions at bay in such a situation is hard enough; and one can easily imagine how complicated communication between the stakeholders can get.

Admittedly, some had gotten the idea into their head that if they changed the equation enough, their influence and power could increase beyond 51 percent of shares. They imagined bringing UMNO players in, either Hishammuddin Hussein’s faction or Zahid Hamidi’s faction, or both, even if these two do not see eye to eye. Also, PAS could come in at some point.

For this strategy to work, and to have any chance of upsetting the Mahathir-Anwar agreement and to stop Anwar from becoming Prime Minister, the DAP and Amanah would have to be kicked out. Attempts in that direction were made in October 2019, aimed at sidelining and neutralising the DAP and Amanah.

For the nation to move forward, we will need to:

Learning from history, we should note that clashes between supporters, as seen in 1998, ultimately leads to clashes between principals. This is a socio-political dynamic that we should avoid, or at least minimize. Tun Abdullah Badawi was also misguided in 2003 to delete or expunge Dr. Mahathir’s deeds. Erasing history is counterproductive.

The statements made by Anwar on 13th February and by Dr. Mahathir on 14th February would be further strengthened if the Pakatan leadership as a whole can provide certainty on the following:

In 1998, when the titans fought, the nation went down with them and has stagnated ever since. The grand coalition that managed to defeat Najib, UMNO and the BN, provides an opportunity rarely found in human history: to reconcile, to heal and to do great things together.

Fatefully, the longevity of the key protagonists makes this possible. Finally, when the centre consisting of Dr. Mahathir and Anwar continues to hold, then everything else will continue to fall into place. Such certainty will lay the foundation for Malaysia to build a great nation for all in the next decade and beyond.