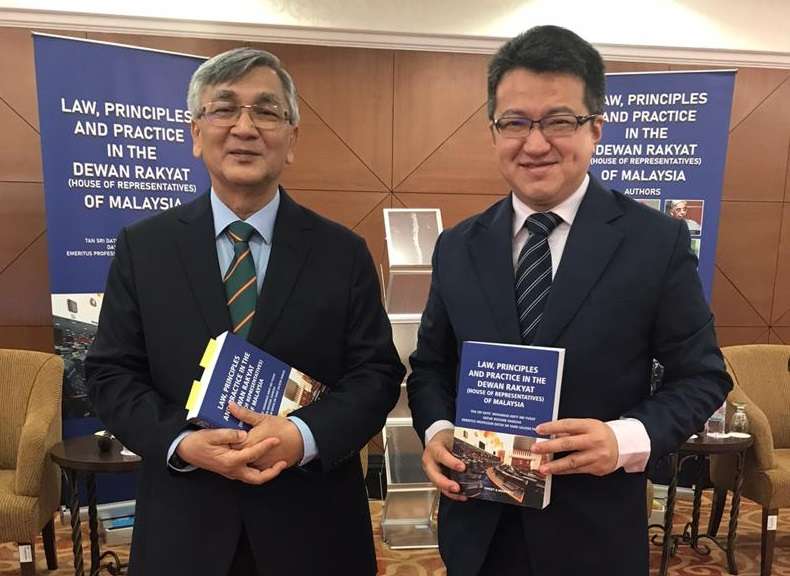 May I first thank Tan Sri Mohamad Ariff bin Md Yusof, Speaker of Parliament, for giving me the honour of being a member of the editorial committee of “Law, Principles and Practice in the Dewan Rakyat (House of Representatives) of Malaysia” and to be invited to speak at this very special occasion.

I first got involved in championing Parliamentary reforms when I assisted Lim Kit Siang in organising a forum on “First World Parliament” in May 2004 attended by Datuk Seri Nazri Aziz who was made the first-ever Minister responsible for Parliament. At the time, Kit Siang had just returned to Parliament after a one-term break, and there was a new Prime Minister who campaigned on the reform platform.

Datuk Seri Nazri was able to promote some international causes via Parliament such as democratisation in Myanmar, for which I am grateful, but there were very little reforms to the actual workings of Parliament.

During the tenure Tan Sri Pandikar Amin Mulia, the only substantive change to the Parliamentary institution was the establishment of a second chamber aimed at creating more Parliamentary time for MPs to speak. Regrettably, nothing much beyond that was done in his 10 years as Speaker.

It is in such context that the two years of the 14th Parliament under the Speakership of Tan Sri Mohamad Ariff was a great period for Parliamentary reform that we will miss, and we pray for its return and continuation.

What do we seek to achieve through Parliamentary reforms?

Parliament is a living institution that should be the centre of rapidly changing national public life. Practices of Parliament should reflect the changing needs. Malaysia adopted the Westminster Parliamentary framework of government at its independence in 1957 and the first Parliament convened in 1959.

It is interesting to note that a permanent set of ministerial select committees scrutinising the functioning of ministries only came into existence in Westminster in 1979 after Margaret Thatcher’s victory. The second chamber was first “invented” in the Australian Parliament and later adopted by Westminster.

In the 14th Parliament, for the first time there were serious efforts to modernise our Parliamentary institutions. I recall my many conversations with Tan Sri Mohamad Ariff. His eyes shine with excitements when sharing on the practices he learnt from overseas visits or seminars conducted by experts, or preparing to adopt new ideas.

My deputy minister colleagues and I met Tan Sri Mohamad Ariff several times and each time he listened attentively to our views and subsequently some practices were changed immediately, with the help of Datuk Roosme Hamzah and the parliamentary service. I felt particularly grateful to him because I have lobbied for some of these changes for years with the previous Speaker but to no avail.

One such example was to restrict the time of each question-and-answer to 6 minutes to allow for approximately 15 questions to be replied in each of the daily one-and-half-hour question time. The 6-minute rule allows for more questions to be answered, and for ministers to know exactly which day of the week their ministries have to answer question in Parliament.

One of the major pieces of work which is still ongoing is to present a Parliamentary Commission Bill for Parliament to have its own service rather than to be part of the general civil service. Much as we talk about reviving the Parliamentary Service Act 1963 which was abolished in 1992, Tan Sri Mohamad Ariff is right with his idea that the Malaysian Parliament deserves a new Act to govern its administration.

The Westminster-style Parliament’s primary function is to form government and to have the confidence in the government to be tested on the Parliamentary floors. But Parliament should not be put aside to become a rubber stamp after a government is formed. This is what happened throughout the history of the Malaysian Parliament until 2018.

It is very difficult to convince the Executive to create more Parliamentary Committees for MPs to participate in governing, and for the public to come forward to share their views during Parliamentary inquiries.

Governments need to see Parliament as partners in co-governing to enable the flourishing of Parliamentary committees as well as high quality debates and questions in the chamber.

Ministers won’t know everything that happens under their watch. The time of government knows best is long gone. Transparency and accountability by ministers to Parliament and by civil servants to Parliamentary committees would help ensure that the government is run with the people’s best interests in mind.

Co-governing through Parliamentary committees would also help nurture a bipartisan group of MPs who will be subject matter experts on policy areas they devote their time on. This would allow successive governments from both sides to draw talents to be promoted to the front bench. Their interactions with bureaucrats in committee works would also help foster a strong whole-of-government ethos. Committee works would also strengthen collegiate bipartisanship which are important to the functioning of a democracy.

I am very glad that the 14th Parliament has a very active Public Accounts Committee chaired by an Opposition MP and 10 select committees on a wide range of subjects, such as the Defence and Home Affairs Committee, which can serve as the precursor of a full-fledged ministerial select committee system. Public Accounts Committee sessions were planned to be live telecast once rules are changed.

More need to be done to expand mechanisms for co-governing. In the years to come, I don’t foresee a single dominant party winning more than one third of the seats in Parliament. All future governments will be formed by coalitions of parties with similar strengths and there will be more changes of government. If one takes a long view, co-governing is good for the nation and good for all sides in Parliament.

Expanding time and space for MPs

One important role of the MPs is to speak on behalf of the voters they represent specifically and the general interests they champion. It is important that Parliament makes space and time for MPs to carry out this important function to keep Parliament relevant to the lives of ordinary people and to ensure that the powers that be at high places hear the voices of the people through their elected representatives.

Let’s us be frank. To a certain extent, each Parliamentary chamber is a theatre.  We can’t stop some MPs from theatrical performances. For the longest of time, the Malaysian Parliament faces with a double whammy – not enough time for MPs to speak and once an MP has the opportunity, he or she would load everything at one go especially during the debate of Royal Address and the Budget.

Tan Sri Mohamad Ariff and the 14th Parliament discussed the possibility of introducing Opposition Time while changes were on the way to expand the roles of the Special Chamber (second chamber) to allow for more forms of motions for debates so that some constituency-specific matters can be dealt with there without having to waste the chamber’s time.

There were also discussions to allow for committees to debate ministerial budget during the “committee stage” instead of the current practice of the “committee of the house”. Such move would give MPs ample time to scrutinise ministerial budget instead of the current speed train that does not do justice to the billions of Ringgit approved within a couple of hours.

For the nation’s sake, more should be done to expand the time and space for MPs to bring the voice of the people to Parliament.

I believe Tan Sri Mohamad Ariff and the 14th Parliament have achieved great heights in enacting reforms we have never seen since the Malaysian Parliament first convened in 1959.

“Law, Principles and Practice in the Dewan Rakyat (House of Representatives) of Malaysia” is a testimony of his efforts that set the gold standard. It is also a statement of aspirations and an unfinished agenda for all Malaysians to pursue together. It will be on the shoulder of Tan Sri Mohamad Ariff and the endeavours between 2018 and 2020 that the future generations would stand on to achieve a world-class Parliament.

Amid the global democratic decline, decay and erosion in the past decade or so, the 14th Parliament under the speakership of Tan Sri Mohamad Ariff was a great exception that we should all celebrate. I hope this golden age is more than just a sudden appearance of a meteor but an ongoing process of democratisation of our beloved nation.

This speech was delivered by Liew Chin Tong at the launch of the book titled “Law, Principles and Practice in the Dewan Rakyat (House of Representatives) of Malaysia” on 7 July 2020. He is part of the editorial committee for the book.