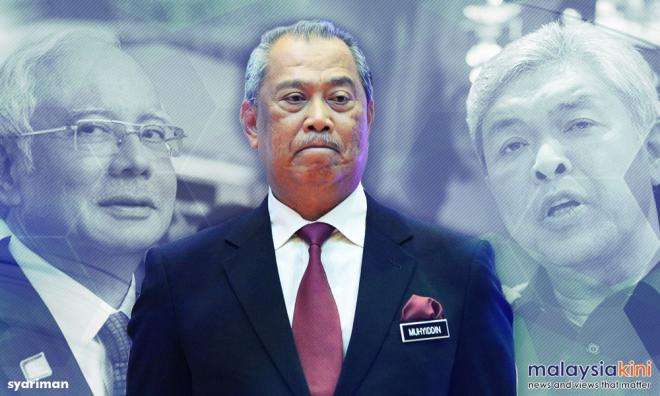 The “October surprise” in Malaysia has now come to the point where, either the Muhyiddin government will collapse first, or UMNO would break up before a Najib-Zahid coup against Muhyiddin is launched.

The weeks from now until Parliament votes on Budget 2021 will see the reckoning of Tan Sri Muhyiddin Yassin. His fragile Sheraton government may collapse in the weeks, if not days, to come. The main faction of UMNO led by Najib Razak and Zahid Hamidi is trying to pull the rug under Muhyiddin by withdrawing support for his government. But Zahid’s move may have also hastened the pace of UMNO’s breakup.

Key UMNO leaders are unhappy, especially after their bitter experience with Bersatu during the recent Sabah state election. If Muhyiddin loses power as a result of UMNO’s moves, it was squarely on his inability to recognise that the entire Sabah venture by Hamzah Zainuddin – complicated by some silly mistakes by Azmin Ali which angered more stakeholders on behalf of Muhyiddin- was an unnecessary distraction.

What are key UMNO leaders unhappy about?

Without UMNO’s numbers, the Sheraton coup would never have happened. But from day one, Muhyiddin, Hamzah, Azmin and their operators’ main objective was to divide and break up UMNO.

Umno’s main complaint was the fact that despite UMNO’s 39 seats, Muhyiddin’s party (which holds 31 seats) was rewarded with the most important ministerial portfolios.

The Prime Minister also appointed two non-politicians as his personal proxies to helm the portfolios of Finance (Tengku Zafrul Aziz) and Religious Affairs (Dr. Zukifli Mohamad Al-Bakri), both posts coveted by UMNO. In fact, PAS also felt let down for not being given the Religious Affairs post.

Apart from Azmin’s group in Bersatu, the rest of the Bersatu leaders were former UMNO leaders, some had left UMNO before the 2018 election, some are turncoats who joined Bersatu after UMNO lost federal power.

After the departure of its progressive leaders in 2015, PAS has given up its national ambition to reach out and to have representations in all states. PAS’ realistic objective is to dominate in Kelantan, Terengganu, northern Kedah and eastern Pahang. Bersatu has no qualms ceding these realms to PAS whereas UMNO would not be able to do so as they have been contesting in these areas and they continue to have significant grassroots presence there.

Fundamentally, what we are dealing with now is still the aftershocks of the earthquake in 2018 – UMNO’s downfall from pre-eminence.

After the defeat of UMNO, leaders who were less tainted with Najib Razak’s money, such as Mohamad Hassan and Khairy Jamaluddin were hoping to rise to lead the party. They were hoping that Najib and Zahid Hamidi would leave the party to new leaders to rebuild the party from the opposition and win in the next general election.

But Najib and Zahid were not ready to let go of the reins. They needed a political vehicle with which they could arouse public support to remain relevant and plot a comeback in order to stay out of jail. They seized on the ICERD issue and later the Seafield riots to inflame the nation.

UMNO under Najib and Zahid pivoted towards PAS and together they pursued a “scorched earth” strategy to burn the house down by using race and religion. PAS and UMNO played on Muslim anxiety and cemented the perception that the Pakatan Harapan government was controlled by DAP, and that the Chinese were in control.

This group’s aim was to make it ungovernable for Pakatan that at the end a general election would be held and PAS and UMNO would win.

At the same time, there were other factors at play. Azmin Ali did not want Anwar Ibrahim to be Prime Minister. He worked overtime to create a new coalition that would not name Anwar as PM. Things moved at high speed after a series of videos emerged in June 2019 which allegedly depicted Azmin performing sex acts with a man.

The plan in October 2019 was to engineer a Malay unity government with the addition of Hishammuddin’s group (17), Gabungan Parti Sarawak (GPS) (18) and PAS (18) to bring their numbers to 53, the exact number needed to replace Amanah (11) and DAP (42).

The Malay Dignity Congress on 6 October 2019 was organized by Hamzah Zainuddin, with Azmin Ali and Hishammudin Hussein running the back end. The subsequent attacks on DAP in the entire month of October was meant to make it untenable for Pakatan Harapan to stay together.

The primary objective of the plan to use the 53 from Hishammuddin’s group, GPS and PAS to replace DAP and Amanah’s 53, was to deprive Anwar the opportunity to be Prime Minister. Azmin believed that the moment DAP and Amanah were out of the equation, he would be able to control most of the PKR MPs, or that nobody would back Anwar as PM.

On 14 October 2019, New Straits Times published a front-page story of Hishammuddin Hussein’s grand idea of building a “Bangsa Malaysia” without DAP and Amanah. It was supposed to be the first salvo fired.

But at that time, Muhyiddin Yassin and Dr Mahathir Mohamad were not keen on such a move. Much as some of us were aware of the Azmin-Hamzah-Hishammudin plot, Azimin (PKR) and Hamzah (Bersatu) were then allies therefore we couldn’t name them. Hishammuddin’s NST article provided a rare chance to expose the plot and stop it.

On 15 October 2019, I managed to get Pakatan Harapan Secretary-General Saifuddin Abdullah to agree to sign a joint Majlis Setiausaha statement with the four PH Secretaries-General: Hatta Ramli (Amanah), Saifuddin Nasution (PKR), Marzuki Yahya (then Bersatu) and Anthony Loke (DAP’s Secretary-General is the member of Majlis Presiden while the de facto No. 2, National Organising Secretary is the leader in Majlis Setiausaha).

To this day I am still puzzled why Saifuddin Abdullah, who is closely associated with Azmin and played such a prominent role in the Sheraton coup, did not hesitate to sign the media statement denouncing the Hishammuddin-Azmin-Hamzah plan. Perhaps he was not privy to the plan at that time.

The Pakatan statement was widely published in all major newspapers on 16 October 2019, exactly a year ago. I would say that we averted a coup of 53 (Hishammuddin’s group, GPS and PAS) replacing 53 (Amanah and DAP) on that day.

Pakatan failed to avert the next coup on 23 February 2020 when Muhyiddin endorsed the plan and Zahid brought the entire UMNO bloc to the table and insisted that he was the sole representative speaking for UMNO.

By February, with UMNO’s full number of 39 on board, their plan was to kick out Anwar’s group in PKR, DAP and Amanah. The coup plotters assumed that Shafie Apdal’s Warisan and Dr Mahathir would be supportive, and the new Sheraton coup government would govern with at least 125 if not 130 seats. They were stunned when Dr. Mahathir and Shafie refused to be associated with the coup and since then, the Sheraton coup government could only govern with a majority less than the number of fingers on one hand.

The point is, UMNO is not able to act as a coherent and united force since its defeat in 2018. Hishamuddin’s plan was for UMNO to break up in October 2019. It remains to be seen what will happen in October 2020.

Zahid and Najib’s gambit to break up with Muhyiddin may end up breaking UMNO first. The role of UMNO Vice President and UMNO’s most senior minister Ismail Sabri is to be watched. He may have the casting vote to decide which side will end up in the history books.