1990: The election year that changed Malaysia 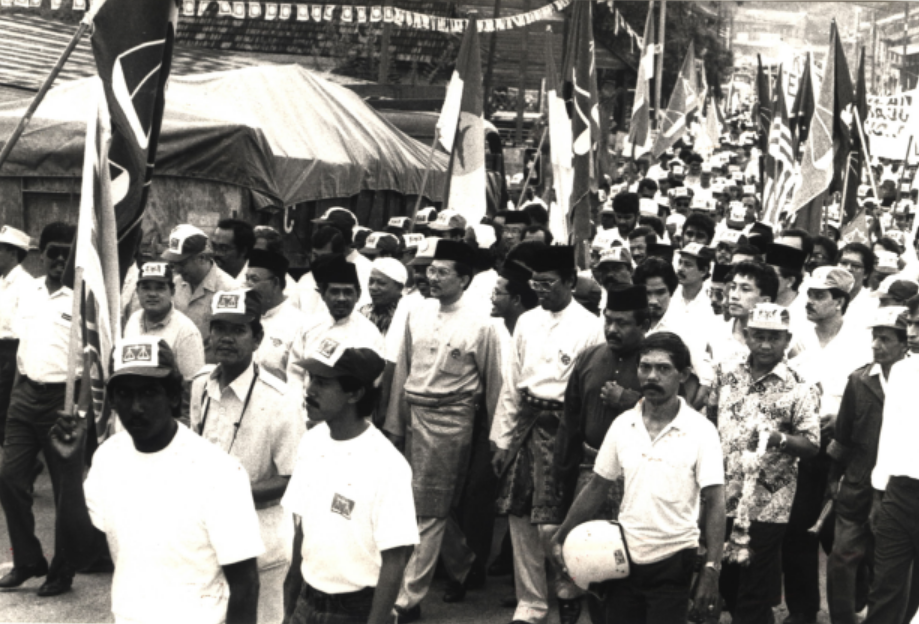 The 8th General Election was held on 21 October 1990, exactly 30 years ago. It would change the political landscape of the nation.

I started reading newspapers and getting very interested in politics at the age of 9 in 1986. Like many, I remember the 1980s as politically messy, racially divisive and an economic roller-coaster.

I was also a student of Chinese literature and history over two decades ago. One of the books I loved very much was Ray Huang’s “1587, a Year of No Significance”. He chose a year in the long history of the Ming Dynasty to tell the state of affairs and to explain the seeds of what were to come.

At first glance, the results of the 1990 general election was not as earth-shattering as, say the 2008 and 2018 general elections, but the responses to the election results by key actors, particularly the then Prime Minister Dr. Mahathir Mohamad, changed the course of history significantly.

Vision 2020 and the idea of Bangsa Malaysia (the Malaysian Nationhood) owed their existence to the 1990 general election.

Dr. Mahathir became Prime Minister on 16 July 1981 with the public expecting a new epoch that would break with the past. He was the first non-lawyer to be PM and the first commoner to reach the top.

Comparatively, the first PM Tunku Abdul Rahman was a son of the Sultan of Kedah, his successor Tun Razak Hussein was a hereditary nobleman from Pahang, and third PM Tun Hussein Onn was the son as well as grandson of former Johor Menteri Besar.

Mahathir never had a strong base in UMNO. In 1969, he was even sacked by the Tunku but was brought back into the party by Razak, and appointed Minister of Education in 1974.

A year later, probably one of the most consequential UMNO party elections in hindsight, he came in third after Tun Ghafar Baba and Tengku Razaleigh Hamzah in the Vice Presidents’ race. When Razak died in London in January 1976, Hussein who succeeded him made a surprise decision by selecting Mahathir – the “outsider” candidate – to be his Deputy Prime Minister.

When he became the PM, Mahathir didn’t choose his DPM, instead he allowed for the contest of UMNO Deputy Presidency between Tengku Razaleigh who is also affectionally known as Ku Li, and Musa Hitam in 1981. Ku Li’s camp alleged that Mahathir subtly favoured Musa who won narrowly. The contest between Ku Li and Musa repeated in 1984 which Musa won with a larger majority.

After the 1982 general election, Mahathir replaced the party’s old guards.  Nearly half of UMNO’s parliamentary and state candidates were changed. Anwar Ibrahim who campaigned for PAS in 1978 was announced as a surprise UMNO candidate in Permatang Pauh a week before the nomination. After the election, young leaders were appointed Menteri Besar such as Najib Razak who was 29 years old, Rahim Thamby Chik (32) and Mohamad Isa Samad (33). After the 1986 general election, Muhyiddin Yassin (39) and Muhammad Muhammad Taib (41) were made Menteri Besar.

In the meantime, to check Musa’s growing influence, Mahathir demoted Ku Li from Finance Minister to Minister of International Trade and Industry but kept him in the Cabinet despite allegedly agreeing with Musa before the party election to drop Razaleigh altogether. From the start, the more carefree Musa probably saw himself as “co-PM” when the media called the pair “2M government”. However, the PM rebutted that 2M stood for “Mahathir Mohamad”. Musa grew frustrated with Mahathir and resigned in February 1986. Ghafar Baba was chosen as his replacement.

The enemy of my enemy

According to the old adage, “the enemy of my enemy is my friend”. Hence, Ku Li and Musa came together, forming a “Team B” in UMNO to challenge Mahathir and Ghafar in Team A in the April 1987 party election. Among the 1,479 delegates, Team A won with 43 and 40 votes respectively, the smallest  election margin ever.

As it was a hollow victory for Team A and a moral victory for Ku Li’s group, the losing faction continued to pose a serious threat to Mahathir’s government. In February 1988, the Federal Court decided that UMNO was illegal and therefore disbanded. Mahathir formed UMNO Baru by excluding Ku Li’s faction.

South Korean scholar Hwang In-won in his very important book “Personalized Politics: The Malaysian State under Mahathir” (2003) pieced together the incidents and argued that “In sum, UMNO (Baru) was entirely formed around Mahathir’s personality. Indeed, the formation of a new party provided a long-awaited opportunity for Mahathir to eliminate all his political rivals from the ruling party’s mainstream.”

The dissident leaders in the old UMNO were “forced to become opposition”. Ku Li formed Semangat 46 party and aligned with DAP and PAS in two separate coalitions – Gagasan Rakyat and Angkatan Perpaduan Ummah – to contest in the 1990 general election. This was the first-ever political coalition DAP entered into, planting the seed for future coalitions.

Prior to that, during the 1987 UMNO crisis, ethnic tensions escalated and culminated in the showdown in October 1987. The Chinese groups protested that non-Chinese speaking teachers were sent to Chinese schools to hold senior positions. The then-Education Minister was Anwar Ibrahim.

A gathering of Chinese leaders in Thean Hou Temple was organised. UMNO Youth, under Najib Razak, vowed to organise a counter-rally with 500,000 Malays on 1 November. The government launched Operasi Lalang on 27 October that detained 106 political and NGO leaders who had nothing to do with the Chinese school protests under Internal Security Act. Sixteen DAP leaders were detained, including Lim Kit Siang, Karpal Singh, Lim Guan Eng and Kerk Kim Hock. Three newspapers, Watan, Sinchew and The Star, were shut down. Kit Siang and Guan Eng were the last to be released in April 1989.

A sense of white terror enveloped the nation while very deep-seated anger among the non-Malays was simmering.

The 1990 general election saw Barisan Nasional winning only 53.38% of popular votes. PAS received only 6.72% of votes but riding on the wave of Semangat 46, PAS recaptured power in Kelantan after losing it in 1978, hence the emergence of Tok Guru Nik Aziz Nik Mat as a prominent political figure in the next 25 years until his demise in February 2015.

Dr Mahathir grasped the political reality well: if all BN’s opponents managed to come together as a cohesive force and if their popular vote share crossed a tipping point, a change of government would happen.

Prior to this, Barisan won by splitting the opposition, i.e. on the Malay side, PAS was competing with UMNO to be more Islamic. Therefore, non-Malay voters would have no choice but to vote for BN as they couldn’t fathom the idea of voting for PAS. On the non-Malay side, during the 1980s, DAP was seen as competing with MCA to stand up to UMNO hegemony, which many of their supporters also interpreted as Malay hegemony. The DAP was portrayed as a threat to Malay interests and therefore it was very difficult for the Malays to vote for DAP.

Although Ku Li had lost GE8, the opposition coalition’s popular support had shattered the sense of complacency and invincibility of BN. Dr Mahathir knew that if he had lost half of the Malay votes and most of the non-Malay votes, BN would be sitting on the opposition bench.

Vision 2020 and its aftermath

Vision 2020 was essentially a political response to the 1990 general election. On 28 February 1991, Dr Mahathir unveiled it with the idea of Bangsa Malaysia in his Vision 2020 speech. The entire narrative of BN changed as a result. Anwar Ibrahim, by then seen as Dr Mahathir’s new protégé, promoted the idea of “Melayu Baru” in the lead up of the 1993 UMNO election which compliments the Bangsa Malaysia narrative.

From the 1990s onwards, the tension between ethnic Malay and Chinese was dialed down many degrees. It was not so much Malay versus Chinese, it was more of Mahathir against the hegemony of the USA, UK, Australia, Singapore, and sometimes the Jews. The enemies were no longer inside the country.

As I started getting interested in politics in mid-1980s, the change in perceptions was very stark to me. The young non-Malays in the 1990s adored Mahathir and Anwar despite the fact that they were hated in the 1980s. As a purely Chinese-educated kid, I started reading Berita Harian and Utusan to improve my Malay language in 1993. Each day I spent two hours on the papers. I recalled that Berita Harian then was written for all Malaysians while Utusan Malaysia under chief editor Johan Jaafar was less racial. At the same time, the economy was in exceptional boomtime in the roaring 1990s.

The result was that BN under Mahathir and DPM Anwar won an unprecedented 65% of the popular vote in the 1995 general election, with a huge swing from among non-Malay middle ground voters. For the first time since 1969, BN won more than half of Chinese votes. Dr Mahathir took the sail out of DAP’s wind by adopting DAP’s Malaysian narrative. The party suffered a long downturn in three consecutive general elections, i.e. 1995, 1999 and 2004.

On a side note, Joseph Pairin Kitingan’s Parti Bersatu Sabah quit BN mid-way during the 1990 general election, betting on Ku Li’s coalition to win federal power. The victorious Mahathir never forgave Pairin and set the stage for the entry of UMNO which eventually took the state in 1994 and ruled till 2018. Such was the background of the recent chaotic Sabah election.

As Malaysia is now stuck in a political impasse, it is interesting that many of the key characters are still playing a role in the national scene while the younger generation probably have no clue as to their roles in shaping the histories of the 1980s and 1990s.

In short, the 1990 general election and its aftermath established new ground rules in Malaysian politics.

First, a multi-ethnic opposition coalition trying to win across racial lines was possible and did pose a serious challenge to BN although it took 28 years from 1990 to defeat the leviathan.

Second, the nation’s middle ground can accept a Malaysian narrative which appeals to all ethnic groups by articulating a larger dream without having to set one ethnic group against another ethnic group, and it was a winning formula.

I am of the view that the Malaysian narrative is still the winning formula for both healthier politics and nation building. It happened before, and it can be done again.