To reset the scene, Muhyiddin should remove Hamzah and Azmin 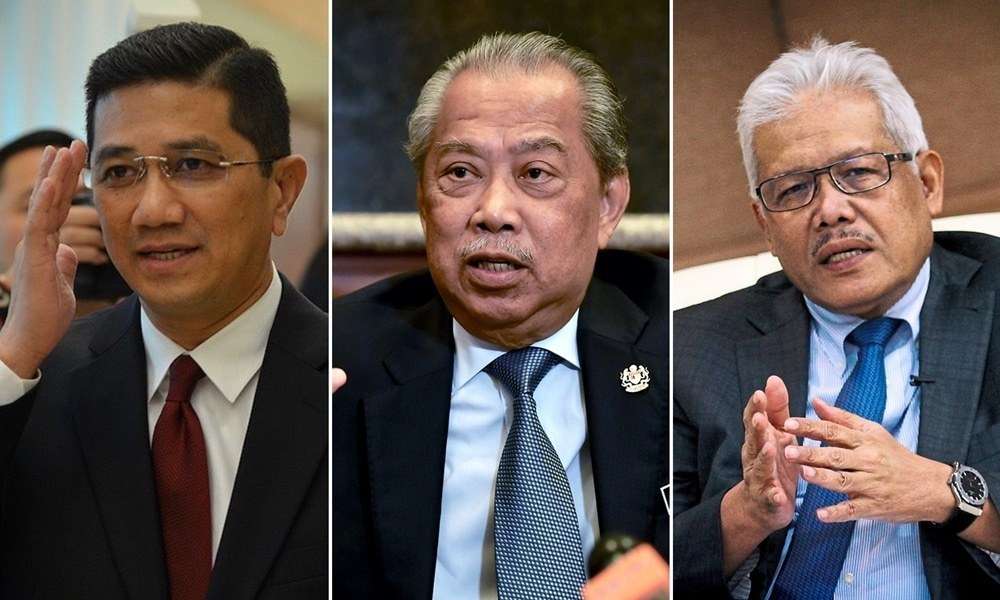 To reset the scene, Prime Minister Tan Sri Muhyiddin Yassin should make Parliament the avenue for genuine cooperation, consultation and co-governing with the opposition for the greater good of the nation in this time of Covid-19 crisis. To smoothen the process, it would be very helpful if Muhyiddin offers the heads of Hamzah Zainuddin and Azmin Ali.

In the last decade, the royal institution has made three very important interventions in favour of preserving parliamentary democracy.

First, in October 2015, the Council of Rulers showed its displeasure against the National Security Council Bill and the then-King decided not to assent to the bill. It was a clear indication that the Rulers were not prepared to accept Prime Ministerial overreach in matters of national security.

Second, several Malay Rulers played very important roles behind the scene to ensure the smooth post-election transition of power from Barisan Nasional to Pakatan Harapan on 9 and 10 May 2018.

Third, the historic decision yesterday by the Rulers to reject the Cabinet decision to impose emergency rule will be remembered by future governments as an indication not to attempt authoritarian overreach.

How can the nation move forward now?

The government should not fear Parliament and the government must not treat the opposition as the enemy of the state.

With equal treatment of opposition MPs, treating them as equals to backbenchers in terms of resources and access to provide policy inputs, with a Confidence and Supply Agreement in place, the Muhyiddin government has an opportunity to turn the crisis into the new birth of Malaysian parliamentary democracy.

To smooth the process, Muhyiddin  should also consider offering the heads of Hamzah Zainuddin and Azmin Ali, in exchange for the goodwill of all parties across the aisle to move forward in a bipartisan manner.

Since the half-day Parliamentary session on 18 May 2020, I have been saying to friends and foes that Muhyiddin Yassin should stop relying on Hamzah Zainuddin as his chief political operator. BecauseHamzah doesn’t understand the new political reality after the UMNO hegemon-led one-party state was defeated in the May 2018 general election.

Hamzah is trying to re-create single-party dominance and rule, as though Muhyiddin possesses two-thirds majority in Parliament.

Between March and the May parliament sitting, Hamzah was trying to buy MPs from the Opposition. Very few would ever consider crossing over when the government’s majority is so slim. No one is sure if the Muhyiddin government would linger on. It is foolish for him to assume that MPs would cross over. In over half a year since March, only the Lubok Antu MP crossed the floor.

Then, Hamzah ventured into Sabah. The end result was a pyrrhic victory. The Sabah move was totally unnecessary. It was like Napoleon and Hitler opening up a second front by venturing into Russia and suffering losses on both ends. Hamzah pushed UMNO to the edge and Muhyiddin had to deal with the fallout at the national level with Zahid Hamidi attempting to quit the government. Muhyiddin’s only achievement – taming Covid-19 – was eclipsed as a consequence of the Sabah campaign.

The move to push for emergency rule is reportedly another of Hamzah’s ventures, with Azmin Ali openly defending it. I heard about the idea of suspending parliament two weeks before it was presented. I also read the statement by MIC President S Vigneswaran, who was probably asked to “test the waters” with the public. But I was still stunned when Muhyiddin went along with it and presented it to the Yang di-Pertuan Agong.

The lapse of judgment on the part of Muhyiddin is astonishing. It just felt like one wrong move after another since the beginning of the year, when he decided to ditch Pakatan Harapan in favour of a “Malay government”.

Hamzah was also the architect of the failed coup in October 2019 (which sought to sack the DAP and Amanah from the Pakatan Harapan Government), plotting togetherwith Azmin Ali and Hishammuddin Hussein. He was also the prime mover of the Sheraton coup, aided by Azmin.

For the Muhyiddin government to move forward, he needs to accept that he is not governing with two-thirds majority and there is no more one-party state. The role of the Prime Minister is to build consensus among allies and to build goodwill with the opposition, especially during the Covid-19 crisis which requires bipartisanship.

Muhyiddin must commit to stop persecuting the opposition and accept that he is the Prime Minister for all Malaysians and not just for Bersatu, to the irk of even his ally UMNO, not to mention the opposition.

To foster goodwill for bipartisanship, Muhyiddin should ask Hamzah Zainuddin and Azmin Ali to resign to take responsibility for wrongly advising the King and also for creating the toxic political atmosphere that led to the Cabinet decision of pushing for emergency rule.

With the departures of Hamzah and Azmin from the Cabinet, cooperation among the governing Perikatan coalition parties will improve, and a friendlier milieu for a genuine bipartisan working relationship with the opposition in time of Covid-19 crisis would be fostered.