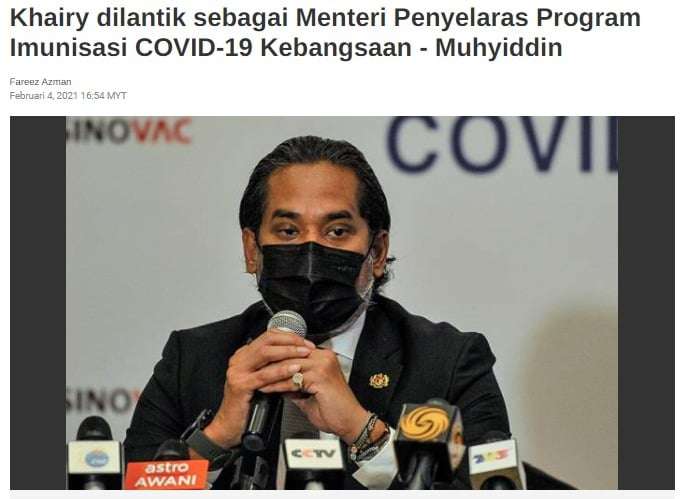 1. I congratulate Khairy Jamaluddin for his new portfolio as czar for immunisation and wish him success, of which the nation depends on.

2. Malaysia needs a new Health Minister. The current situation is untenable. The Minister of Health is nowhere to be seen and is intellectually incapable of running the Health Ministry, arguably the most important ministry during this prolonged Covid-19 war.

3. Outsourcing the entire Health policy to the Director-General of Health Tan Sri Noor Hisham Abdullah is both unfair to him and to the nation. The DG should be responsible for operations but policy should be set by the Minister in consultation with the Cabinet and the Prime Minister. The Westminster parliamentary system is such that the Minister has to bear full political responsibility for policy decisions and if things go south, the Minister and the Government are held responsible politically.

4. The Minister of Health, Adham Baba, should be asked to resign or to move out from Health to other ministries for the failure to contain the third wave of virus infections since September 2020 that escalated in January 2021.

5. Because of weak political leadership on the part of Adham Baba, the DG of Health is running the show almost entirely. The nation was helped by his judgment in the early stages, which we are grateful for. But some of the tenets of his approach, such as his aversion to mass adoption of rapid tests or the insistence of not testing asymptomatic close contacts, have unwittingly contributed to the spike in cases.

However, Noor Hisham should not be held responsible, as the buck stops at the Minister’s desk. If there is a competent Minister, the DG would not need to make tough political and policy calls.

6. I tweeted a week ago that if a non-politician could be appointed as the Health Minister, perhaps the Prime Minister’s Health Advisor Tan Sri Jemilah Mahmood could be a good choice. If it has to be an UMNO politician to avoid political problems, at least Khairy appears to be so much more competent than Adham Baba.

7. I would personally urge the Prime Minister to appoint Khairy as Health Minister, as giving Khairy the portfolio of immunisation without the full backing of the Ministry of Health bureaucracy is setting Khairy up for failure.

8. Malaysian do not want the Covid-19 immunisation program to fail as it is about our lives. We want Khairy to succeed and we want Malaysia to win the war against Covid-19.