Together we unite to win GE15 and govern again 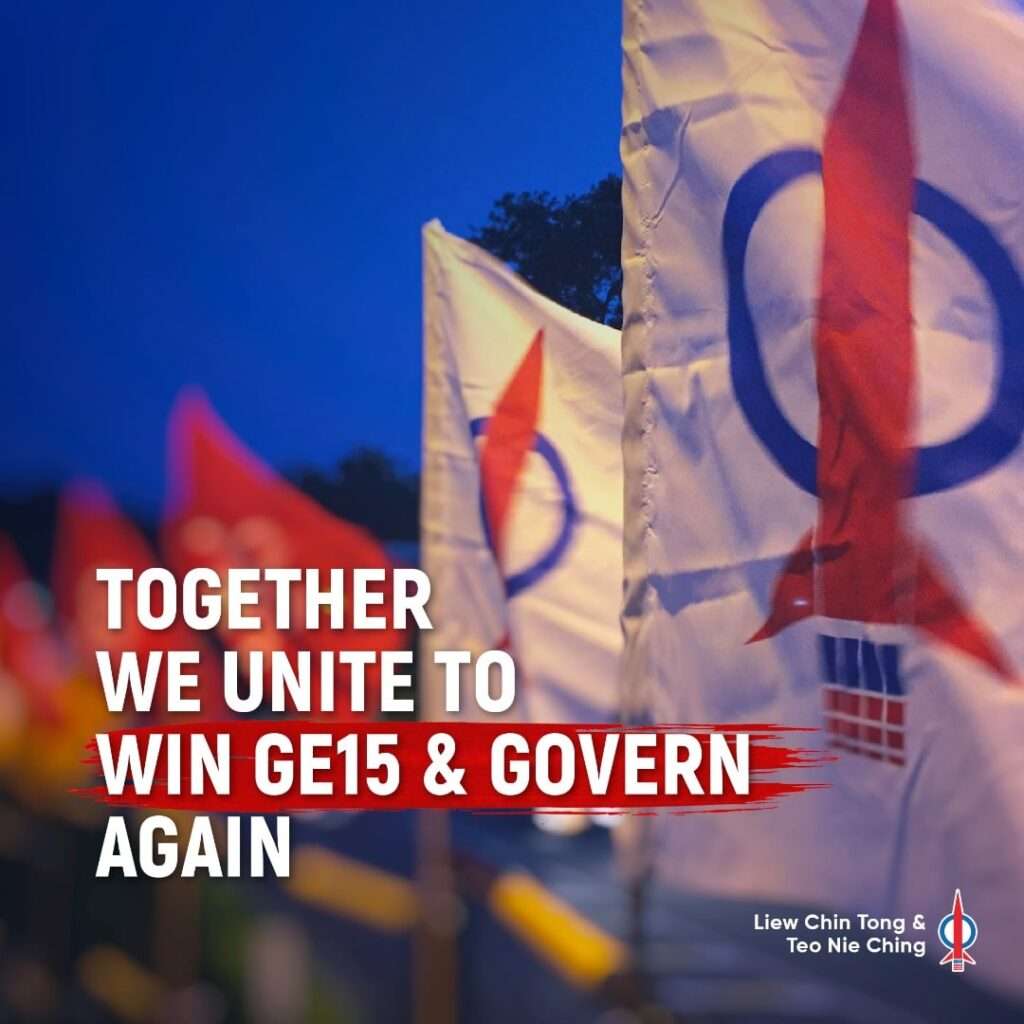 Sdri Gan Peck Cheng shared with us earlier that the state committee to be elected in this upcoming state convention would be Johor DAP’s 20th. Johor DAP has braved the political ups and downs for the past 50 over years and we are confident that it will continue to flourish under a strong leadership, even in the current flux.

Admittedly, it hasn’t been the easiest to operate after the state party election in 2018. We view this party election as an opportunity for us to discuss a clear plan and direction for the party and elect the most suitable leadership line-up to lead a united Johor DAP towards future successes.

We – Liew Chin Tong and Teo Nie Ching – humbly seek the delegates on 2 May 2021 to give our team a chance to lead Johor DAP, our supporters and all Johoreans in the next three years as we gear up for the next General Election.

We must acknowledge the significance of Johor DAP in the Johor and Malaysian political landscape. Having seen the capabilities of Johor DAP leaders and members, we are also committed to further unleash their potential. Defying all odds, Johor DAP will spearhead a nationwide movement to make this nation better and stronger.

There is national significance in the upcoming Johor DAP State Committee elections:

Pakatan Harapan won 98 out of 165 seats in the Peninsula during GE14, Johor alone contributed 18 of them. Johor is the most crucial battleground for PH in the next GE if it intends to win federal power. PH also won 36 out of 56 state seats in Johor. Given Johor’s pivotal role in the national political scenario, the leadership of DAP Johor will have national impact and consequences.

Geographically, Johor is a large state with a relatively even population ratio across age groups. It covers the urban metropolis of Johor Bahru but it is also made up of small towns in central and northern Johor where agriculture and SMEs are the mainstay.

As almost all constituencies that DAP contested in Johor are multi-ethnic in nature, it is crucial for us not to “outsource” to our allies and instead reach out directly to voters of all ethnic groups. There is a wealth in talent in Johor DAP, which we believe is capable of kickstarting the transformation of DAP to adapt to the current political scene.

Under our leadership, Johor DAP aims to achieve the following five goals:

We reject being passively led. Although many are pessimistic about the current situation, we believe it is never impossible for the tide to turn. In GE14, the rakyat voted to defeat one-party dominance, in GE15 we are entering into an unprecedented “Three Kingdom” scenario. The voters’ fear has been broken, but they need political leadership that they can believe in. For DAP to win, it will take wisdom, strategy, great courage, and for the entire party to be committed to victory.

DAP cannot enter into this battle by ourselves and only prepare for our own seats. DAP must be prepared to campaign together with our allies in Pakatan Harapan and all compatible opposition parties. The goal for GE15 is no longer the conservative target of just retaining our existing seats but to expand our horizon and form both the Johor and federal governments.

If given the mandate by the delegates, we will form a 10-person outreach team to go to all 14 DAP state seats and 20 must-win constituencies of Pakatan Harapan and our “big tent” allies. The outreach team will conduct training to empower grassroots leaders and cadres of DAP and our allies, covering topics such as election campaign team building, PACA, publicity and social media strategies.

Unlike in the past two elections where local teams were dependent on state-wide or nationwide machinery (such as the Ubah truck), we now know that there are many cadres who are able to lead the local campaigns in GE15.

The State Headquarters’ role would then be to: (i) Formulate an overall strategy, (ii) Empower and strengthen local campaign mechanism, (iii) Focus on key constituencies that will determine whether we can win power. In other words, the role of the State HQ is to facilitate a campaign model that can be replicated and scaled up in various locations.

GE15 will see a contest between three governments – PH, PN and BN. In this round, DAP is not entering the contest as an opposition party, but as a party which has governing experience, a government-in-waiting. More importantly, we will be ready to implement our governing ideas after we win power.

The DAP State Committee will consider appointing shadow councillors and shadow village heads in non-controversial areas where we are active, empowering our local leaders to participate as part of a “government in waiting” to serve the local community and prepare for GE15.

Community building is one of the hallmarks which DAP Johor initiated, the DAP Johor State Committee will continue to support and strengthen community development projects and placemaking efforts.

Johor must not remain an economic ‘backyard’ for exporting labor to Singapore. DAP Johor State Committee should focus on dialogue with SMEs, small traders, Malaysians working in Singapore and a broad spectrum of Johoreans to shape the future economic policy. Other focus areas include environment, climate, and transport. We will also set up a Johor policy think tank to conduct long-term preparation for governance matters.

During the PH government term, DAP was able to groom many high-performing local councillors and village heads. This in turn translate to voters having higher expectations towards their elected representatives. It is no longer enough for MPs and ADUNs to focus on constituency-based service as this can be well-covered by the councilors or village heads. The DAP Johor State Committee will require these elected representatives to be fully invested in policy initiatives, lead local community development efforts, engage with citizens from all walks of life, and work together to plan future policy and local developments that we can implement after forming the government.

Apart from the East Coast, most of Johor’s constituencies are mixed seats. In GE15, DAP candidates will not only face MCA candidates, as Bersatu and UMNO could field candidates in many of MCA’s traditional seats.

We must mobilise and groom more multi-ethnic leaders. Our goal is that in the future, every local DAP campaign team will have members from all races to handle publicity, outreach and PACA work, without having to “outsource” to other parties. This will not be an easy feat to achieve, and it needs consensus within the party. It needs us to be willing to go against the grain.

DAP Johor grew from 87 branches in 2018 to 210 eligible branches in 2021. We have experienced rapid growth from a grocery store to a hypermarket. We must now use the scale and approach of operating a hypermarket to run party affairs.

We accept the view expressed by members about a lack of communication within the party. After the state party election, we will embark on a listening tour to dialogue with branch chairman and secretaries, to jointly discuss a suitable party channel for communication.The state committee will also explore how to effectively strengthen communication with the 20,000 party members across the state. We will study the feasibility of creating a DAP mobile app for party members to interact with the State and National headquarters. If the app can successfully be implemented in Johor, a nationwide rollout is possible.

When handling party affairs, the state committee will treat all party members fairly and not use its power to form branches as voting farms – branches that are only set up for party election purposes.The state committee will hire a full-time executive director for the state headquarters, strengthen the organising department, and will also hire full-time party workers and part-time lecturer positions for the publicity department, political education department, and the Election Preparation Committee.

The main function of the state headquarters is to provide local leaders with training and publicity material formats, political education, and election preparation models, as well as to coordinate and mobilize resources.

If Johor DAP can successfully transform “from grocery store to a hypermarket”, this will assist the nationwide transformation exercise.

Johor voters in particular and Malaysian voters across all states are relatively young, this is particularly true after the implementation of Undi18. DAP must continue to be the party of choice for youths of all races.When women of all races face conservative patriarchy and male-dominated chauvinism, DAP is the party of choice for women who aspire to see a progressive society with gender equality.

Malaysia is in an unprecedented triple crisis of politics, economy and health. The old political order has collapsed, including UMNO’s model of one-party dominance. In 2018, we successfully created a miracle and defeated the old political order. 2021 is not the time to be cynical nor pessimistic, it is now time for us to come together and create a new order that allows for all Johoreans and Malaysians to enjoy a stable and prosperous nation in the next decade. This is the DAP’s duty to the nation and its people.DAP’s journey is never smooth sailing but we always march on fearlessly in the face of adversity and achieve the impossible. We humbly call upon all Johor DAP members to unite and join us in leading the party and our coalition partners in this journey towards winning GE15 and governing again, and to transform DAP from a grocery shop to a hypermarket – starting from Johor.