Covid-19: Not the time for self-defeatism 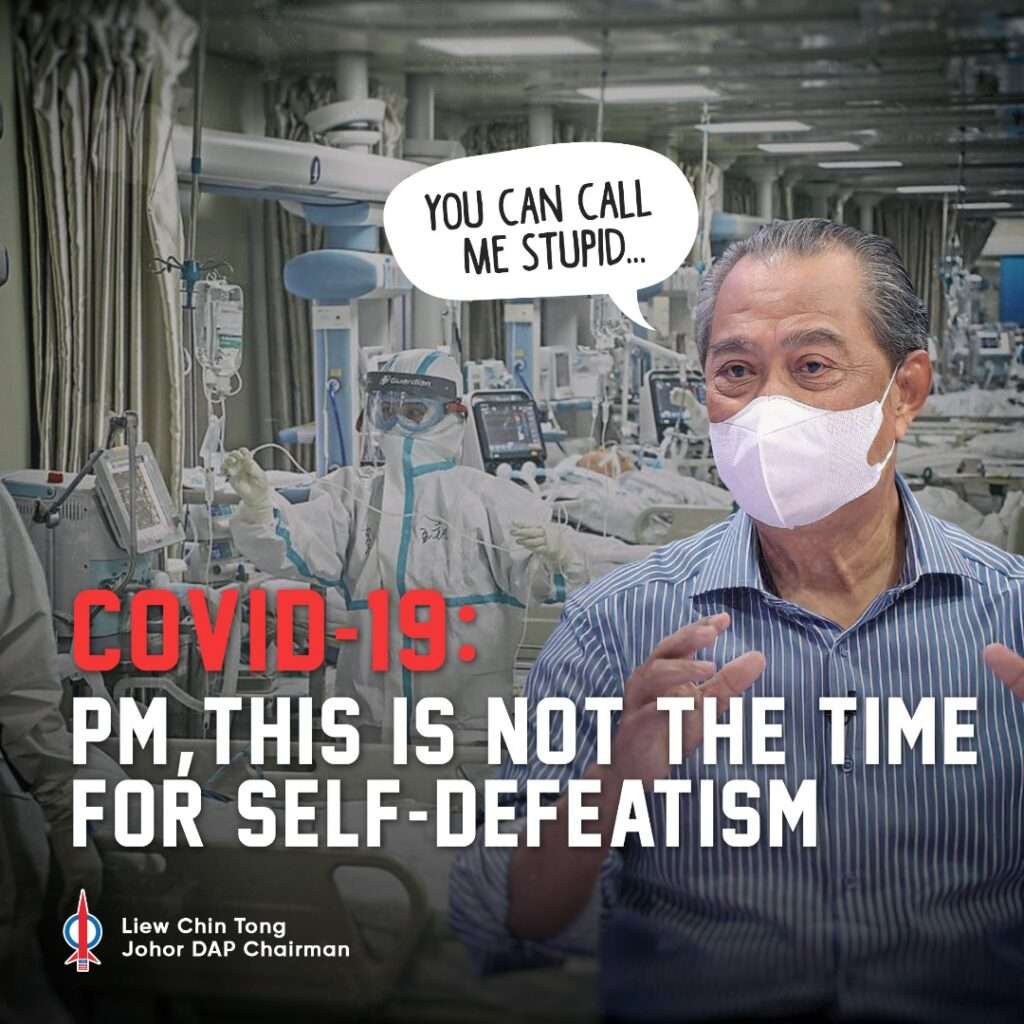 I watched Prime Minister Tan Sri Muhyiddin Yassin’s hour-long television interview on Sunday and came away with the sense that he has given up on dealing with Covid-19 with the tools and resources available to the government.

The Prime Minister (PM) is literally surrendering to time and fate to get us out of the Covid-19 pandemic and placing all eggs in the vaccine basket in the hope that it will be the panacea.

First, we can’t lock down because we need to balance between ‘lives and livelihoods’, the economy cannot afford to shut down.

Second, the government has no money thus can’t afford a rescue plan in the event of a lockdown.

Third, there is nothing more the government can do, the people should assume that if someone contracts the virus, it is because they did not behave appropriately.

But the fact is that doing nothing, not being bold, and not doing enough are not the options. The government’s current response is akin to sitting still while watching a runaway train go off track.

Malaysia now has the world’s highest number of cases per million population in the past week. We are at war. We are in grave danger of a much wider spread that would paralyse every part of our lives in the weeks to come if nothing bolder and smarter is done.

We must first accept that we are at war with a virus. And the war will not end in another year or two. Vaccines are crucial but those vaccinated may still contract the virus and there will be variants and mutations.

The first thing Muhyiddin should get rid of is this notion that the government can’t spend more. As my friend Hafiz Noor Shams said, “If Malaysia were in a real war, KL would have fallen, and the government would still worry about the deficit ratio”. He also added that “to solve this crisis, it is clear we require a much bigger deficit spending: boost the deficit to 9%-10% or even more. The “lives versus livelihoods” dichotomy is a foolish one, which is unfortunately subscribed to by the PM and the Finance Minister because of their misguided neoliberal notions that rating agencies reign and sovereign states can’t do much.

The government must pull all out stops, throw in the kitchen sink and spend whatever is needed to deal with Covid-19. Without taming the pandemic, the economy will not recover. What the government should do is to call parliament and get bipartisan consensus on a spending plan.

Of course, no spending should be channelled or siphoned off by cronies and corrupt officers.

I am appalled at the false debate of whether to lock down or not to lock down. Lock down or not, if there are no extra efforts and new thinking on testing, tracing, isolating and treating, and vaccinating, we will end up the same just weeks after we emerge from a lockdown. The story will repeat itself.

I have repeatedly argued since 1st April 2020 that a lockdown may be a necessary band-aid but going back to the basics of “testing, testing, testing” and tracing massively are key for a long-haul co-existence with Covid-19. (My views are contained in ‘The Great Reset: 100 days of Malaysia’s triple crisis).

On testing, it is painful that the government is still not massively using rapid tests and only relying mostly on PCR tests. I urge state governments to work with private medical entities to conduct massive and subsidised testing such as those conducted by Selangor. The number of positive cases may go up in the short-term, but the nation would know the extent of the spread instead of stumbling in the dark. Free and subsidised testing would encourage those who may otherwise not afford it to go for a test.

The United Kingdom and other countries are now adopting self-testing kits which are equally accurate. The government should make extra efforts to try multiple ways to make testing cheap and accessible to the largest population possible as that’s the only way to co-exist with the virus in the long-haul.

The moment the contact tracers do not have the human resources to trace each of the cases, we are letting the virus run loose and leaving it to fate. The government should consider taking a war-like whole-of-government approach to mobilise civil servants, university students, members and personnel in other uniformed agencies and bodies, and volunteers to be contact tracers. If the government has to spend, do spend massively here. Give them adequate training and empower the national contact tracing effort with technology. The full potential of the MySejatera tracing app has not yet been fully utilised .

It is time for us to accept that not everyone has to be sent to quarantine centres. The shocking conditions of mass quarantine centres are, on the one hand, not conducive for recovery of patients with mild symptoms, on the other hand, takes up too much medical resources to care for asymptomatic patients.

Adding more beds to the mass quarantine centres is not the way forward. Allowing for well-managed home quarantine via technology for those with mild or no symptoms would help focus medical resources on critical patients who need more help. For those who need quarantine facilities, smaller community quarantine centres should be explored. Here the state governments should be brought in to help.

Around 1 in 60 Malaysians have tested Covid-19 positive since the start of the pandemic in 2020. It’s time to reduce the stigma of those who are tested positive. The sharing by former journalist Rahmah Ghazali of her experience as a Covid-19 positive patient in the United Kingdom is illuminating. She was identified as Covid-19 positive through home testing kits made available for free by the National Health Services (NHS). She also received regular phone calls from the NHS to check on her conditions as well as support for food supplies from the local council.

The real focus should be on greatly expanding the number of ICU beds and ventilators. Again, here I wonder why there wasn’t any escalation of spending on these items since the start of the pandemic.

Lots have been said about vaccination in recent days. My first point is that if the Vaccine Minister is not the Health Minister, he is being set up by the PM to fail. I would like to reiterate the call for Adham Baba to be dropped as the Health Minister and to be replaced by Khairy Jamaluddin. That’s the least Muhyiddin could do to show his seriousness in trying to stem the latest hike in cases. Ministerial and political leadership is crucial in time of war.

The vaccine campaign should be a national mission. All private hospitals and clinics should be roped in if they have yet to be. The entire government – the police, the armed forces, the civil service – and NGOs should be mobilised to help vaccine registration as well as the physical work of Phase 3 rollouts. Arrangements such as drive-thru centres should be considered.

I personally witnessed the overflowing crowd at a vaccine centre recently which currently only deals with front-liners and senior citizens. It’s time to plan to escalate the numbers of volunteers involved for Phase 3 when all Malaysians are eligible.

I can’t stress enough the war analogy. In war, the political leaders search for bipartisanship; in war, all ministries, the whole of government, rally around the singular national mission – in our case, combating and containing the virus – and throw in every resource available to the government and society.

And, in war, the Prime Minister won’t appear on TV to tell everyone “call me stupid”, showing that he has given up on fighting. Now is not the time for the government to do nothing. Now is the time for bold wartime leadership.