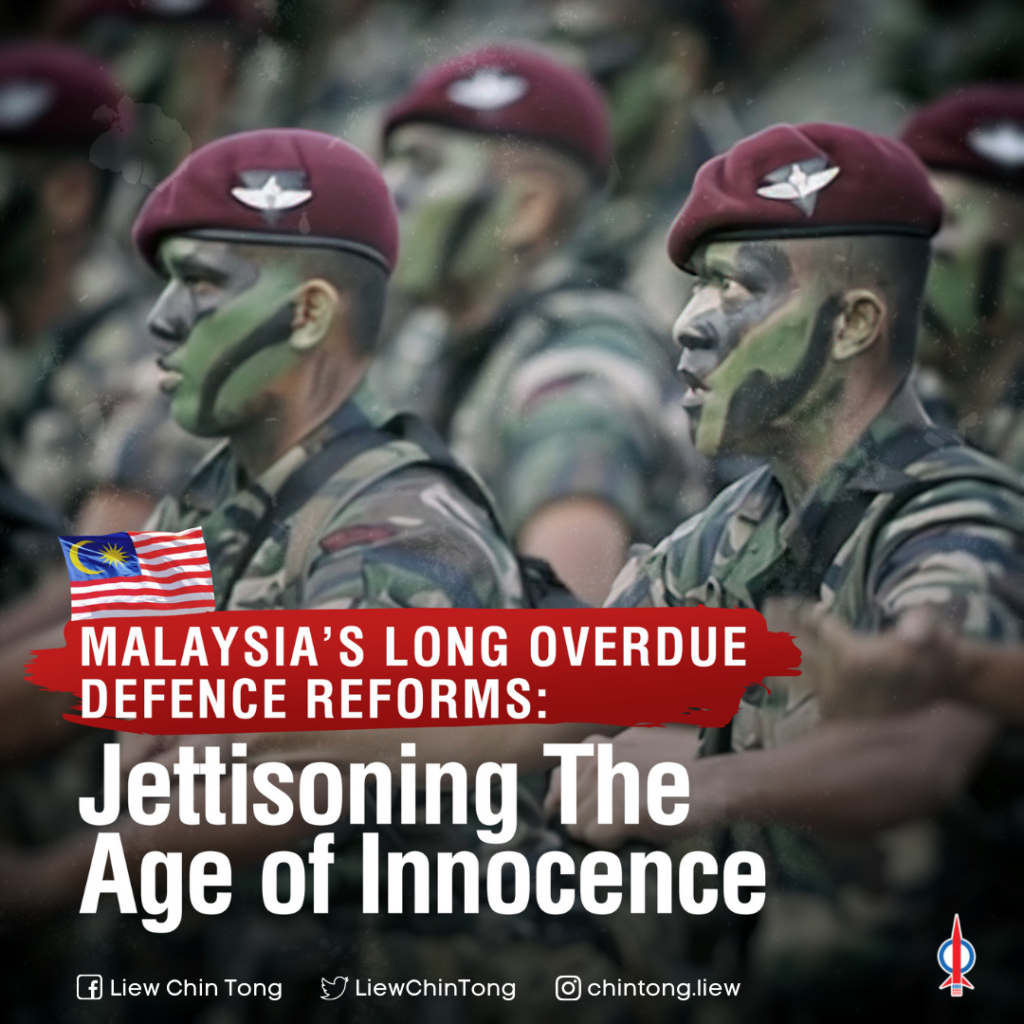 The age of innocence that has dominated Malaysia’s attitude towards defence matters in the past three decades needs to be jettisoned. Given mounting threats in its external environment, Malaysia needs to accelerate defence reforms centred on the concept of jointness across multiple domains.

Malaysia’s long overdue defence reforms can no longer be put on the backburner. For more than decades since December 1989, when the government inked a peace treaty with the Communist Party of Malaya, Malaysians have lived in an age of innocence when it came to the question of external threats facing the country. In recent years, Malaysia’s neighbourhood is looking increasingly less benign, with great power rivalry between the United States and China, and Beijing’s growing assertiveness in the South China Sea.

Last Monday, 16 People’s Liberation Air Force planes entered the airspace above Malaysia’s exclusive economic zone in the South China Sea. This has jolted the nation to wake up to new geopolitical challenges.

For nearly a decade, the Chinese Coast Guard has maintained an almost all-year-round presence near Beting Patinggi Ali (South Luconia Shoals). Thus, in a way, the PLAAF sortie was doing in the air what their Coast Guard colleagues have been doing on the high seas for years — enforcing China’s claims in the South China Sea. China claims ownership of the Luconia Shoals, which are located in Malaysia’s EEZ about 80 nautical miles northwest off Borneo.

In less challenging times, Malaysia did attempt to modernise its defence, including building up the air force and navy for conventional warfare beginning in the 1990s. It also attempted to balance the forces between the peninsular and eastern theatres arising from the Lahad Datu incident in 2013, when a group of militants from the Philippines tried to lay claim to the state of Sabah. Following the incident, there was some talk about the need for jointness between the different arms of the Malaysian armed forces. The post-2013 conversations about jointness did not extend much beyond the previous attempt in 2004, which saw the formation of a joint force headquarters but with a limited scope of responsibilities.

Unfortunately, the defence modernisation programme was distracted by alleged corruption in procurement. Local agents who were more interested in acting for foreign manufacturers had little interest in developing research and development indigenously. In general, a nonchalant peacetime attitude of the ruling elite and the public pervaded over defence matters.

As there has not been strong political will to advance defence reforms, old legacies are dictating the current path. The Malaysian armed forces remain service-centric, with the largest resources and attention given to the army. While acquiring a more multifaceted outlook over the years, the army is still moulded by the experience of jungle warfare it successfully waged against the communists decades ago.

The Cold War legacies guided the army to fortify the Peninsula, and in the eastern theatre, concentrating on guarding the land border with Indonesia. In some instances, the armed forces doubled as a border patrol force to stop undocumented migrants from entering the country.

During the short stint of Pakatan Harapan government, Minister of Defence Mohamad Sabu presented Malaysia’s first Defence White Paper to Parliament on 2 December 2019, with a mission to reform the defence sector to meet the challenges of the 2020s.

The core idea of the Defence White Paper was to define Malaysia as a maritime nation with continental roots. Malaysia is surrounded by the South China Sea — arguably the world’s most contentious body of water — and the Malacca Straits, the world’s busiest sea lane.

A rigorous assessment of defence requirements should follow from a proper grasp of such extant realities. There needs to be an open acceptance that the jungle is unlikely to be the battleground of the future. Capabilities and capacities in multiple domains — maritime and air, urban, cyberspace, and non-conventional warfare — need to be built up rapidly.

When I was Deputy Defence Minister, I often repeated the mantra of former Chief of Armed Forces Tan Sri Zulkifli Zainal Abidin that “the army has to swim” in such a new era. Cognizant of the army’s important role, I reassured the army that no nation could fight with just a contingent of special forces, the navy and air force – it had to do so in tandem with the army. Hence the role of the army would not diminish even if defence modernisation focuses on building joint maritime capabilities.

But the other side of the coin is also true: the army cannot fight alone. The single service centric culture will have to give way to a genuine commitment to jointness.

The Lahad Datu incident compelled the armed forces to expand its command structure in the eastern theatre. There is now a 3-star general each for the army and navy with responsibility for East Malaysia. But serious political will is needed to achieve peninsula-eastern theatre parity in terms of troop deployment and capacities.

The irony of Lahad Datu is that the security sector in the Eastern Sabah front is jointly managed by the armed forces, the police and the civil service. Unfortunately, the three entities are constantly mired in bureaucratic turf wars.

Serious defence reforms will need a team of capable defence civilians and a strong defence industry. The civilians in the defence ministry are currently rotated across the ministries; many of them lack expertise and specialist experience in defence. This will have to change with a cluster of senior civil servants trained in security matters as well as keeping the best civilians at the Ministry of Defence for a longer period. The defence industry will need to shed off its “sales agent” tendency and invest in innovation. Again, political will is required to transform the sector.

The DWP places heavy emphasis on building a future force with new capabilities. Currently, the army, navy and air force each have their own long-term capability plans. But there is currently no agreed-upon joint armed forces capability plan. Indeed, the Cabinet and parliament have never officially endorsed a plan with long-term funding commitments. The five-year Malaysia plan is not an adequate and appropriate instrument for defence planning which usually requires longer strategic horizons. This will have to change, too.

The strategic environment in the 2020s will be markedly different from the last three decades. Malaysia’s comprehensive defence reforms, outlined in its first-ever Defence White Paper, needs the national consensus and political will to be fast-tracked. The age of innocence needs to be replaced by an era of strategic cognizance — a cognizance of pressing realities in Malaysia’s neighbourhood.