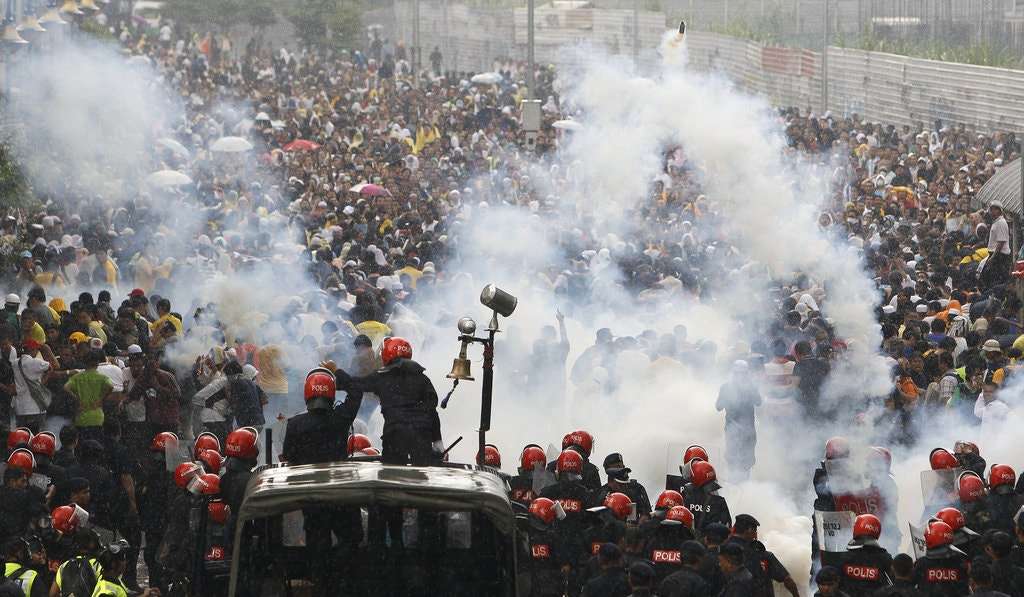 Today a decade ago, we were being tear-gassed on the streets of Kuala Lumpur during the second Bersih rally on 9 July 2011. In my opinion, of the five Bersih rallies between 2007 and 2016, the 2011 one was most consequential. Days before the rally, the King, Tuanku Mizan Zainal Abidin, granted audience to the organisers, A Samad Said and Ambiga Sreenevasan, which had never happened before. The government however went ahead to clamp down on the protest in the harshest possible manner, in full glare of international and domestic media, as well as a very active social media audience.

The prolonged backlash against the Najib government, which came into office in April 2009, resulted in Najib’s concessions on the eve of Malaysia Day in September. The notorious Internal Security Act was abolished, so were several long-standing emergency ordinances, as well as other draconian laws. A parliamentary select committee on electoral reform was formed but shamefully the government did not pursue many of the recommended reforms. Nevertheless, the 2011 Bersih rally was an important milestone in Malaysia’s long democratisation journey.

Below is an excerpt from my book “Lim Kit Siang: Patriot. Leader. Fighter” on the Bersih movement:

Despite the collapse of Barisan Alternatif, its secretariat which consisted of the second echelon leaders such as Dr Dzulkefly Ahmad, Dr Hatta Ramli, Dr Syed Azman Nawawi, Teresa Kok, Sivarasa Rasiah continued to engage each other in parliament and in private. These leaders provided the basis for the Bersih movement from 2005 to 2008, which was instrumental to the massive gains by the opposition in the 2008 election. In the third weekend of July 2005, UMNO turned right-wing at its general assembly while DAP, PKR dan PAS leaders (10 from each party) had a secret meeting in Port Dickson, Negeri Sembilan to explore ways to collaborate. It was one of the greatest coincidences of Malaysian politics

.… The secret Port Dickson meeting led to the formation of Bersih. On 23 November 2006, Bersih was launched at the lobby of parliament in the presence of senior leaders from PAS, PKR, DAP and various NGOs. On 20 July 2007, a mobilisation gathering was held at the Kuala Lumpur and Selangor Chinese Assembly Hall to launch a mass campaign to urge for the reform of the Election Commission and eventually a major rally with 50,000 attendees was held on 10 November 2007.

… The rally’s commander was Mohamad Sabu. In August 2018, at our first briefing session as defence minister and deputy with 50 top generals, I joked that Abang Mat and I, when we first collaborated way back in 2005, he was already the commander while I was his secretary cum strategist. For the crucial year of 2007, Bersih committee meetings – mostly held in Brickfields – provided the second echelon leaders of DAP, PAS and PKR, opportunities to meet at the sideline to discuss political strategies and seat negotiations after settling the official business. After the 2008 general election, the Bersih founding committee persuaded prominent lawyer and former Bar Council chair, Datuk Ambiga Sreenevasan to take over. At her request, all politicians in the committee left. Many would still confuse Bersih 2.0 as being the second rally but it is meant to denote the reincarnation of the Bersih committee, now without the politicians.

Bersih 2.0 committee went on to organise the second rally on 9 July 2011, the third on 28 April 2012, the fourth on 30 and 31 August 2015, and the most recent one on 19 November 2016. The one that was most impactful politically was the one in July 2011 which saw prime minister Najib Razak belatedly responding to the rally by ending several long-standing emergency ordinances and abolishing the draconian ISA. Najib also announced the formation of a bipartisan parliamentary select committee to look into electoral reforms though nearly a decade later, not much has changed apart from the use of indelible ink on polling day.

…The images of top PKR, DAP and PAS leaders, including Kit, at the gate of Kuala Lumpur’s national palace (now the royal museum) at the first Bersih rally on 10 November were very powerful. Kit made it a point to attend every Bersih rally since, being choked with teargas at the ones in July 2011 and April 2012. On the eve of the rally, at the UMNO general assembly, prime minister Abdullah Badawi warned that “saya pantang dicabar! (I will not be challenged!)”. With roadblocks preventing cars from entering Kuala Lumpur, I was very concerned about the turnout. It was also pouring, but as I reached the palace gate and looked back, I saw endless crowds. Rain and tears were in my eyes.

To purchase a copy of the book: https://refsa.org/…/lim-kit-siang-patriot-leader-fighter/

Previous PostMalays, too, want a clean, fair and caring government