The unfolding of a constitutional crisis 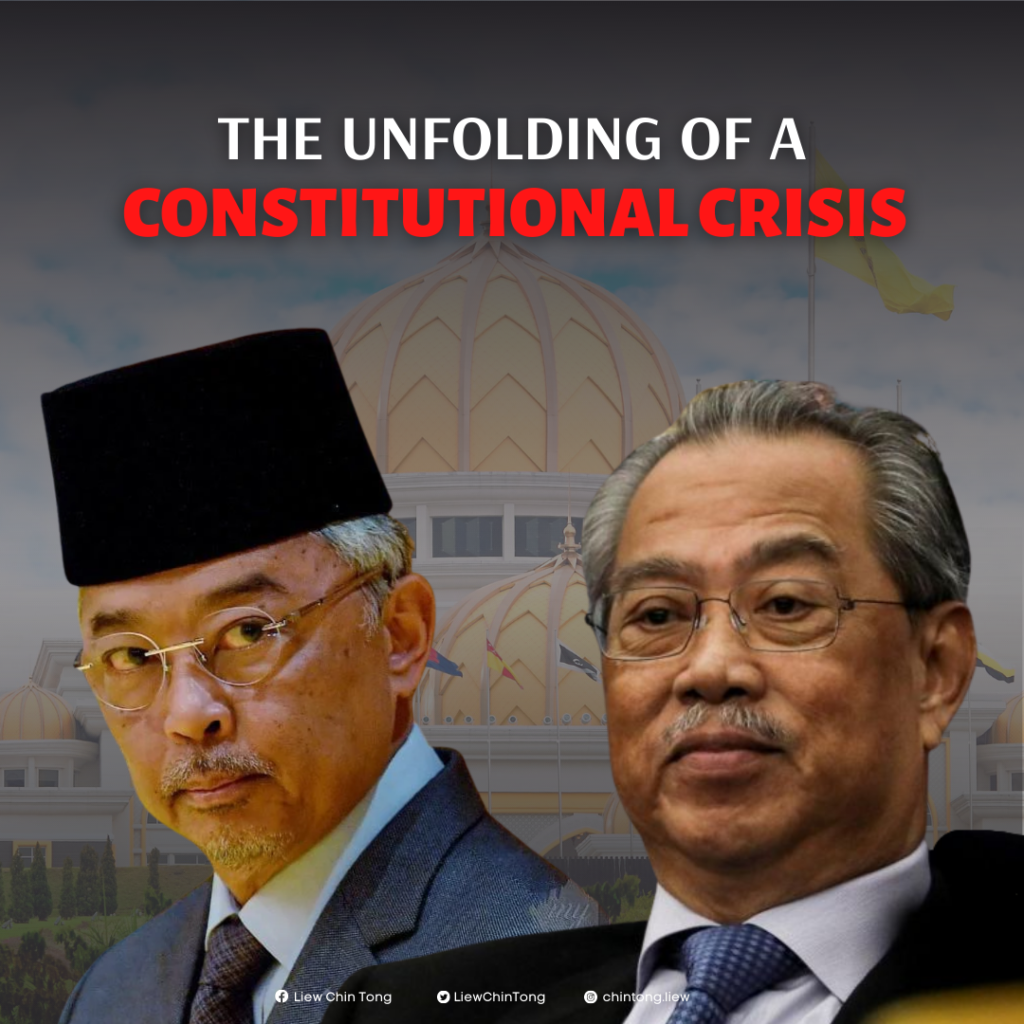 It would be ideal if Tan Sri Muhyiddin Yassin decided to resign honourably. Or at the very least take a less confrontational approach towards the palace by apologising and offering the heads of the Law Minister and the Attorney-General. Then, Malaysia could have avoided a constitutional crisis.

Alas, the statement by the Prime Minister’s Office last night was not only arrogant and disrespectful towards the palace, displaying an unacceptable disdain towards parliamentary democracy, but also showed Muhyiddin’s unwillingness to let go of the highest office in the country.

But we have a peculiar situation here. The King is trying to protect democracy and requesting for the emergency ordinances to be presented, debated, and annulled in Parliament whereas the Muhyiddin government is attempting to prevent Parliament from having a say in the matter.

Back in January, Muhyiddin promised the nation that the King would decide on whether to extend the emergency on the recommendations of the Special Independent Emergency Committee, signifying that the government had then tacitly conceded that the King has his discretion to act over the declaration of emergencies, and that the Cabinet was not the body to advice, as the role has been delegated to the independent committee. Having done so earlier, the Muhyiddin government cannot now turn its back to the King and argue that the King had absolutely no discretion over the emergency.

Something would have to give after the Royals met on 16 June as the decrees were crystal clear on the need to call for parliament sitting as soon as possible, and that there would be no more emergency rule after 1 August.

From that day on, the clock is ticking. At some point, the Muhyiddin government will have to face Parliament and have its majority tested.

The Royal decrees on 16 June, simply put, were meant to tell the Muhyiddin government that there was no more cover via emergency rule, and the government would have to survive entirely on its ability to command a parliamentary majority.

The Muhyiddin government initially intended to drag it till September but had to call the current “briefing session” after the King met the speakers of both Houses on 29 June.

Why the aversion to call parliament and to allow for vote? The answer is simple. The Muhyiddin government doesn’t have a majority despite probably having the largest group of MPs. Some UMNO MPs have indicated that they would vote against Muhyiddin.

It is now clear that Muhyiddin is digging in his heels and not going to let go honourably. Only if there is a sizable number of Perikatan Nasional MPs deserting Muhyiddin, for now he would not fall. There are some assumptions:

First, Azmin Ali and his bloc has nowhere to go so they can’t ditch Muhyiddin;

Second, PAS will only dump Muhyiddin if its president Hadi Awang is no longer in charge or if there are massive societal pressure;

Third, Sarawak’s GPS will play a wait-and-see game until the last minute, and will probably leave only when Muhyiddin is finally ousted.

Hence, the focus now is on UMNO’s factions. The Muhyiddin government was made possible during the Sheraton coup when UMNO decided to join en bloc. But there are at least three types of views among UMNO MPs.

Muhyiddin will surely attempt to avoid a vote in parliament. Hence each of UMNO MPs now owes the Malaysian public an answer.

They should each explain their respective political positions in the next two days. Those who want to cause the fall of the Muhyiddin government should work with the Opposition to force a vote in Parliament on Monday 2 August.

As the nation enters its most dangerous moment, administrative neutrality is crucial. The postponement of parliamentary sessions and sudden lockdown of parliament yesterday on flimsy health ground is a dangerous precedent.

As the Muhyiddin government is engaged in a constitutional crisis with the palace, it is difficult to predict what an embattled regime would do to survive.

The police and all other enforcement agencies, and even the health authorities, must practise administrative neutrality and not to allow for these institutions to be used for political gains of the incumbent government. Their role is to serve the people.

A constitutional crisis is inevitable now. Let’s hope Malaysia will become more democratic as a result of this contestation, and not regress into a more authoritarian form of government.

Previous PostWe shall overcome
Next PostThe Malaysian impasse: Some outcomes to consider