The Malaysian impasse: Some outcomes to consider 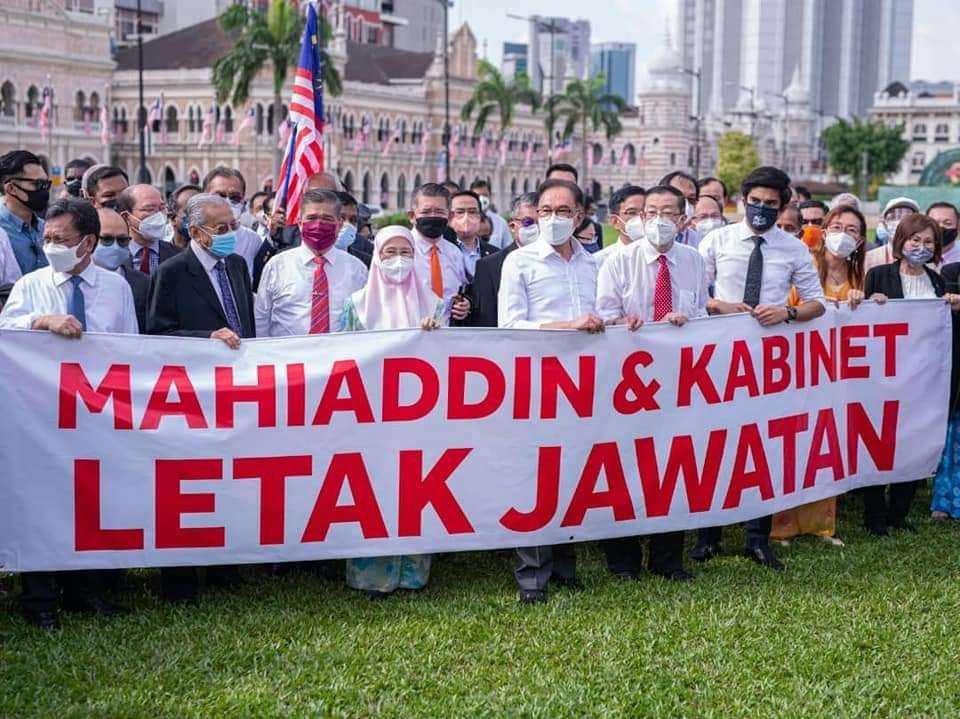 While Prime Minister Muhyiddin Yassin’s government only commands a minority in parliament, those who wish to see him gone would need to cobble together an alternative majority.

After his audience with Yang di-Pertuan Agong Al-Sultan Abdullah Ri’ayatuddin Al-Mustafa Billah Shah on Wednesday, Tan Sri Muhyiddin Yassin told the nation that the King had consented to his plan to test his majority in Parliament in September. Prime Minister Muhyiddin insisted that he has a majority in Parliament; nonetheless he acknowledged that there were doubts. Therefore, he said that he will put his administration to a vote of confidence in Parliament.

Essentially, Muhyiddin is buying time to assemble a majority. But it would be untenable for him to cling on to power if there is a massive exodus of Members of Parliament (MPs) from Perikatan Nasional (PN) in the weeks to come. At least eight MPs from the United National Malays National Organisation (UMNO) have withdrawn their support for PN.

On 6 August, Deputy Prime Minister Ismail Sabri announced that 28 out of 38 UMNO MPs (31 out of 41 Barisan Nasional MPs) supported Muhyiddin. This means that Muhyiddin has 105 MPs on his side — still short of a majority in the 220-seat Parliament.

The Istana Negara has not issued a statement thus far but could possibly contradict Muhyiddin’s claim or ask him to bring forward the parliamentary sitting to an earlier date.

Short of these reversals, the direction of the Malaysian impasse is increasingly clear: the Palace prefers that the political crisis be settled in Parliament, consistent with the pronouncements since June. That it has come down to this is ironic: it is the constitutional monarch who is speaking for parliamentary democracy, when the PN government is pulling out all the stops to avoid Parliament.

While it is quite certain that Muhyiddin does not command a majority, there is a Catch-22 here: anti-Muhyiddin forces are disparate and cannot agree on a particular leader to replace the Prime Minister.

What now? For those seeking to command an alternative governing coalition, there are various outcomes to consider.

The first is that Pakatan Harapan manages to convince all other opposition parties and UMNO MPs who are against Muhyiddin to support Anwar Ibrahim as prime minister. This would be the best outcome for the PH parties of Parti Keadilan Rakyat (PKR), the Democratic Action Party (DAP) and Amanah.

However, numerous efforts since February 2020 to patch up differences between Anwar and leaders of other opposition parties, such as Shafie Apdal and Dr Mahathir Mohamad, have failed. At its general assembly in March, UMNO had expressly rejected the inclusion of Anwar and DAP in any new coalition.

Someone else from the opposition as PM

Here, PH manages to offer a common prime ministerial candidate other than Anwar who is acceptable to all opposition parties as well as the anti-Muhyiddin UMNO MPs. To achieve this, PKR would have to accede to someone else other than Anwar as the prime ministerial candidate. This will not be an easy sell. Anwar has eyed the top seat for years, and came achingly close to bagging it.

This outcome would be a derivative of the one above. A unity government of sorts with PH having a significant say and involvement would be led by a prime ministerial candidate not from its ranks. This person would be a veteran politician who would renounce any contest for the top job in future elections. Some UMNO leaders see Tengku Razaleigh Hamzah, a veteran MP and a former finance minister, in such a role.

To reach this outcome, Anwar and all other prime ministerial aspirants would have to give way, which is not impossible but certainly not easy. Such an outcome does not guarantee that the putatively non-interested prime minister would be biased towards or against some. Neither would it guarantee that the new government would survive the first vote of confidence in Parliament.

Some quarters are now working on other forms of Malay unity government without the DAP and Muhyiddin’s faction. This is despite the fact that the rallying cry for a Malay unity government has declined significantly compared to February 2020. Similarly, sentiment against the multi-racial DAP has also weakened considerably.

However, such an arrangement still appeals very much to certain quarters especially those in UMNO. They are hoping for a takeover from the Muhyiddin regime without having to change the configuration of the current PN setup.

The last possible outcome is that Muhyiddin stays on as prime minister in a minority government. Currently, Muhyiddin’s public support is perceived to be low and few would want to be seen as giving him a lifeline, unless the government explicitly makes major concessions to improve the Covid-19 situation and the economy.

If no new majority government could be cobbled together before the next parliamentary sitting, the Muhyiddin administration could initiate some form of confidence and supply agreements with other parties. It could also effect piece-by-piece, bill-by-bill and case-by-case common ground legislation to survive.

Whatever the outcome, Malaysians need a government that is competent in overcoming the pandemic and revitalizing the economy.