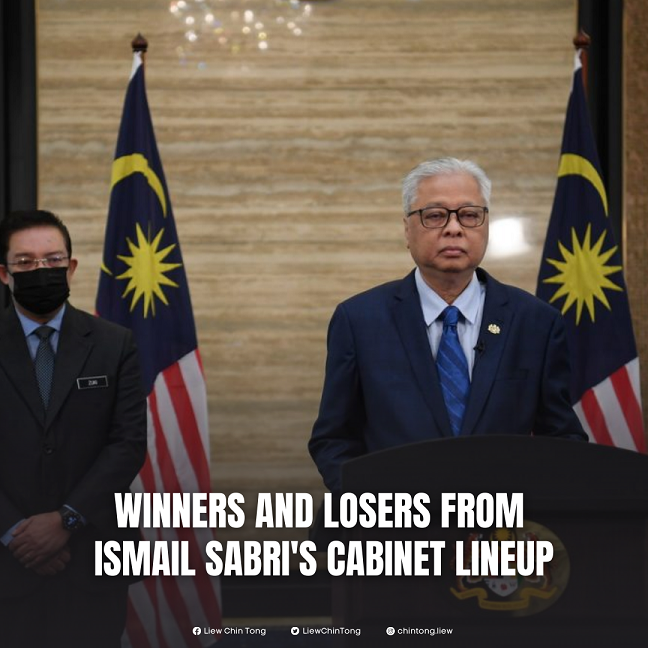 The Ismail Sabri Yaakob cabinet sets the stage for a possible three-way battle in the next general election. Essentially, this is a Muhyiddin Yassin government without Muhyiddin.

Let’s begin with giving credit where it’s due. Khairy Jamaluddin’s appointment as health minister is certainly the bright spot in the Ismail Sabri cabinet. I wish him well and pray for his success.

Had Muhyiddin been bold enough to appoint Khairy as health minister and to retire Health Director-General Noor Hisham Abdullah in early 2021, Malaysia could have fared much better in the handling of the Covid-19 pandemic.

At least, the Muhyiddin government’s reputation may not have been so tarnished that people passionately demanded for his resignation.

A new health director-general with new ideas and willing to cooperate with as many stakeholders as possible.

While I am an opposition politician, I put the need of the nation first. I always hope that the defence ministry and the armed forces are led by the best political leaders available.

For many people, Hishammuddin Hussein is seen as not doing much and not being effective but I hope he does well as defence minister, bringing with him experiences; hopefully without his past excesses.

Now, Hishammuddin has the opportunity to prioritise the implementation of the Defence White Paper and its auxiliary plans, as well as solving problematic projects during his previous stint such as the littoral combat ships project, which is now in limbo.

Zahid Hamidi, Najib Razak and the UMNO renegades who brought down the Muhyiddin government end up as the biggest losers. Ismail Sabri was able to leave them in the cold, which certainly is a cause for celebration. Only Noh Omar and Noraini Ahmad of the UMNO 15 managed to make it to the list.

I now await the prime minister to make the same public commitment as Muhyiddin in not interfering nor aiding the kleptocrats in their court processes. The word ‘kleptocrat’ will still be a watch word.

With only a maximum of 15 MPs, Zahid & co wreaked havoc and set narratives throughout this year. The demise of Zahid’s leadership is a good start for the nation.

UMNO must go through a catharsis by disassociating itself with Zahid and Najib, and their past crimes and sins. No shortcuts, please.

Another loser is Azmin Ali. While he is still clinging on to the same portfolio Muhyiddin gave him, it’s not something worth celebrating.

He held the senior position of handling the country’s economic affairs under the Pakatan Harapan government but Muhyiddin demoted him to ministry of international trade and industry after the Sheraton coup.

As the prime mover of the parliamentary coup, Azmin expected to be rewarded with the post of deputy prime minister.

Until a couple of days ago, rumours have it that Azmin was still hoping to become deputy prime minister, or at the least finance minister. But Ismail Sabri has other ideas. Serves him right.

As for Tengku Zafrul Aziz who is retained as the finance minister, I see this as a best among the worst outcome.

He was appointed to allow Muhyiddin to be the de facto finance minister. This means Ismail could control finance via Zafrul in the same manner, which is bad for checks and balances in the cabinet.

However, I would still think that the nation is better off without Azmin as finance minister. Likewise, it is good that the post did not go to any senior UMNO leader, either Mohamad Hassan or Johari Ghani, because it would only be an avenue for UMNO to build its political largesse.

I see the cabinet list as a political statement. Ismail Sabri is indicating that he would take on Zahid & co in the hope of taking charge of UMNO, both the party and the brand.

By avoiding UMNO supreme council meetings for the week since his appointment as PM, Ismail is telling us that he is not taking instructions from Zahid and the party.

The UMNO “tulen” (genuine, although in this case, hardcore) won’t be happy with the cabinet list and would want their pound of flesh at some point.

Whether Ismail Sabri is able to retake the UMNO brand from Zahid & co or not, he and his fellow UMNO leaders in the cabinet such as Annuar Musa, are amenable to contest the next general election with Bersatu and PAS in a single coalition – a strategy that Zahid and the UMNO “tulen” group vehemently fought against.

What this would mean is the possibility of a Chinese classic three-kingdom standoff – which will be the Ismail Sabri camp, Bersatu and PAS as one coalition, either under the banner of Perikatan Nasional or Barisan Nasional against UMNO “tulen” group that rejected the Ismail camp and Bersatu, and the opposition Pakatan Harapan.

The Ismail Sabri government is unlikely to be transformative. Yet, what the nation needs in the post-pandemic situation is transformation.

Major changes on how the nation would be governed could only come if Pakatan Harapan and the greater opposition could get its act together to offer strong team leadership, genuine policy alternatives and fresh thinking. It is time to build back better.