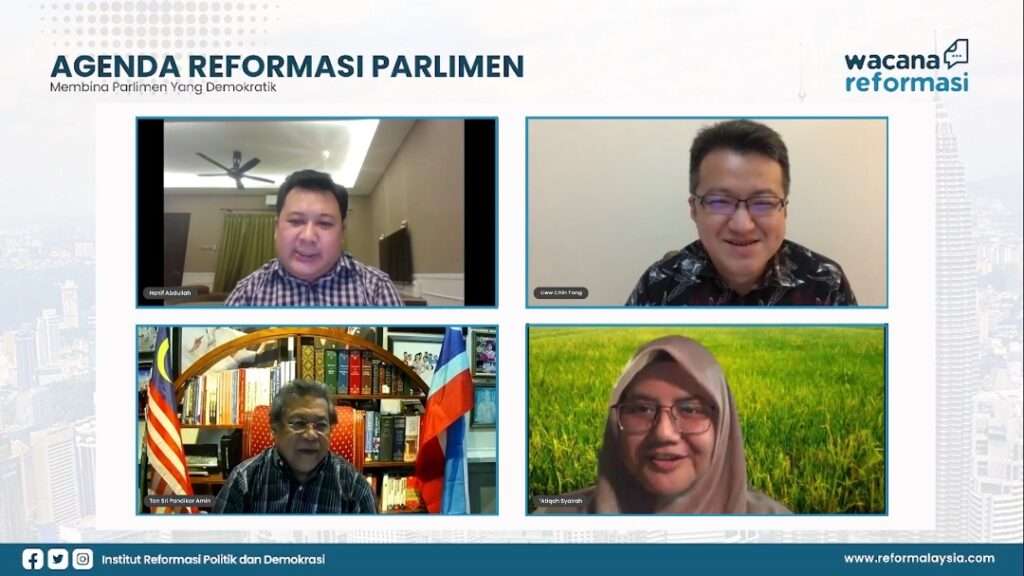 Speech by Liew Chin Tong at the “Agenda Reformasi Parlimen” forum organised by REFORM Malaysia on 7September 2021 (released on 8 September 2021).

It was my great pleasure to be invited to speak at this forum with former Speaker of Parliament Tan Sri Pandikar Amin Mulia who presided over the Dewan Rakyat during my two terms as Member of Parliament, first for Bukit Bendera (2008-2013) and later Kluang (2013-2018). The other panellist was youth activist ‘Atiqah Syairah Shaharuddin.

The British-style Westminster parliament, of which the Malaysian parliament models itself after, has three major functions:

First, to form governments and test their legitimacy

Unlike Washington-style presidential system, Malaysian voters do not directly elect prime ministers. Prime ministers are appointed on the basis that they command the majority in the legislature. Therefore, the primary role of a Westminster parliament is to enable the formation of a government, and to allow for the legitimacy of the government to be tested through a vote of confidence or other forms of bills and motions.

A functioning and independent parliament allows for attempts by its members to test the legitimacy of the government. Former prime ministers Tun Hussein Onn and Tun Abdullah Badawi tested their legitimacy in parliament after taking over from their respective predecessors.

It is therefore regrettable that the Ismail Sabri Yaakob government has refused to put forward a confidence motion to test its legitimacy.

The parliament is where laws are made. But in the Malaysian context, MPs are expected to just rubber stamp in haste bills drafted by the Attorney-General’s Chamber and approved by the Cabinet. MPs are not given sufficient time to read and review the bills that are usually tabled in a parachuted form just a few days before they are due to be debated and passed in parliament.

Parliamentary reforms must therefore focus on enhancing the mechanism for MPs and the parliamentary institution as a whole to fulfil their law-making roles. Some immediate changes that can be made include:

One must no longer expect MPs to pass bills like a rubber stamp. Each line in a bill should be drafted in consultation with MPs in a committee setting, and scrutinised thoroughly, before its eventual passing in the chamber.

Third, to check and balance

Parliament is also to serve its check and balance function vis-à-vis the executive. Parliamentary time and mechanisms should be made available to fulfil this function. Here are some “quick wins”:

I did not mention the roles and functions of the Dewan Negara as I intend to address this topic elsewhere another time. But surely, Dewan Negara needs its own share of reforms, too.

Tan Sri Pandikar shared in his speech that the Malaysian parliament is the only nominally democratic legislatures in the world which affairs is run by a minister and his department, instead of by parliament itself. The other legislature which has a minister of parliamentary affairs is India. One of India’s former parliamentary affairs ministers explained to Tan Sri Pandikar that his role was to coordinate agenda between the government, opposition and the speaker, and not to manage the affairs of parliament.

Parliament should have the institutional, administrative, and financial autonomies to conduct its own affairs. Therefore, Malaysia must revive the Parliamentary Service Act 1963, which was abolished in 1992, with updates to accommodate contemporary needs.

As I have written before, there is also a need to end the role of Ketua Pentadbir (chief administrator) in parliament and return the scope of responsibilities of administering parliamentary affairs to the Dewan Rakyat secretary, who is to be assisted by the Dewan Negara secretary, as stipulated by the original Federal Constitution in 1957.

The new Parliamentary Service Commission Act should empower the Speaker of Dewan Rakyat, the Yang di-Pertua of Dewan Negara, leaders of government and opposition in both Houses, to jointly manage parliament’s affairs.

At some point, the minister for parliamentary affairs should cease to be and take on the role of Leader of the House (Ketua Majlis), which is held hitherto by the Prime Minister but unnecessarily so. Most mature Westminster legislatures assign a senior minister as Leader of the House.

But as I listed above, more should be done to make parliament a great institution.

Credit should be given where it is due. I applaud Tan Sri Pandikar for attempting to create a set of “departmental” parliamentary committees to oversee ministries back in 2016. But his proposals were outrightly rejected by the then Najib Razak government. As Pandikar put it, “Barisan Nasional was too strong then.”

Wan Junaidi was Pandikar’s deputy from 2008 to 2013. Pandikar described, “kami terseksa bersama”. As speaker and deputy speaker, Pandikar and Wan Junaidi both suffered at the hands of the executive and more specifically, the ministers for parliamentary affairs.

I hope with all these experiences from the past, Wan Junaidi is ready to be a transformative leader to change parliament for the better once and for all and leave a legacy that he would himself proud of.

Previous PostThere is no better time than now for parliamentary reform
Next PostMalaysia’s political ceasefire is a move towards sensible reforms and away from back-stabbing, at long last