A new deal for southern Johor, a new hope for Perling 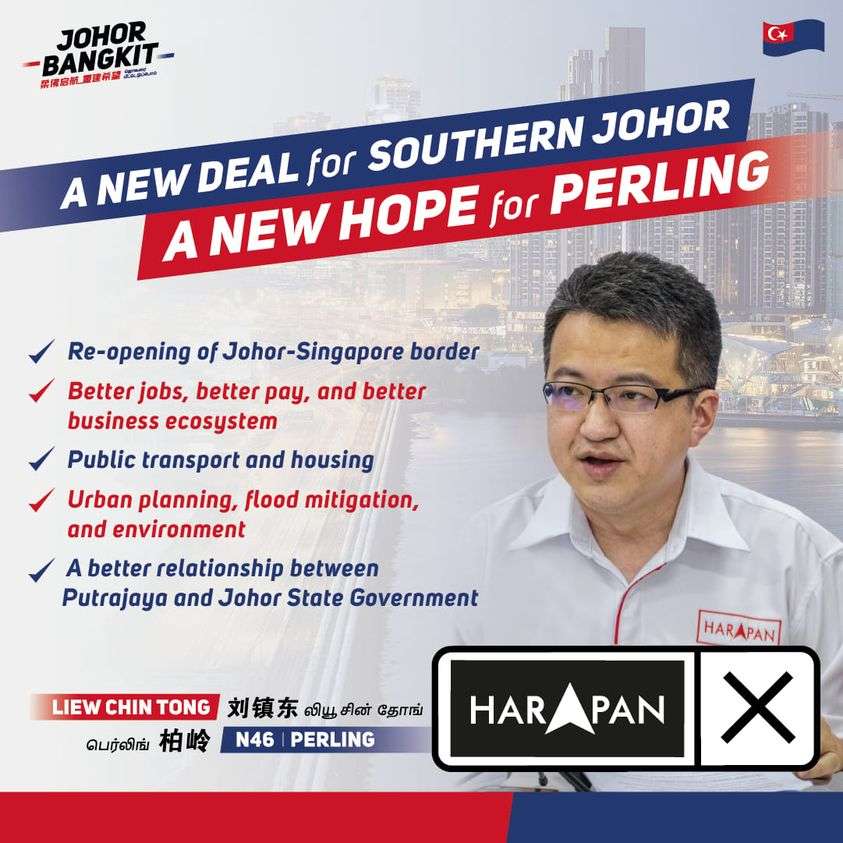 The old ways are no longer working. We need a new deal. Reject the old, give the new a chance.

In 2018, Pakatan Harapan became the government but a group of greedy politicians betrayed the people’s trust. The answer is not bringing back the discredited Barisan Nasional or the incompetent Perikatan Nasional. The new hope is still Pakatan Harapan.

I am tasked to contest in the seat of Perling in Johor Bahru to demonstrate that Pakatan Harapan is serious about governing the state, again.

As the government-in-waiting, these are the issues we want to resolve for the people, especially to those in Perling and southern Johor.

We urge the government to re-open the Johor-Singapore border safely and immediately through the Covid-19 “test and release” measure. This means those who tested negative should be allowed in without undergoing quarantine. The Vaccinated Travel Lane (VTL) should also be extended to personal vehicles such as cars and motorcycles, instead of confining to buses and flights only.

This could alleviate the economic problem in southern Johor. The federal and state government must address the problem of inflation. While price of goods in southern Johor is almost the same as that in Klang Valley, the wage level is much lower.

Not just in Perling but Johor needs a dynamic state government to grow the economy and ensuring all Johoreans get equal opportunities to live a better life.

It needs quality investments from both domestic and foreign investors.

All government agencies must be effective and efficient in attracting investments, technology and skills that would bring better jobs and better pay for Johoreans.

There should be no corruption at all levels as corruption. It gives bad name to the state, it adds to costs of doing business and it makes it difficult for young people to enter the business world.

We will try our best to work with local authorities to solve traffic congestion and lack of parking at various places in Southern Johor.

In the long run, greater Johor Bahru area needs an efficient public transport system to include enough buses that are clean and on-time, and other transport modes, especially after RTS is completed in 2026.

We need a more coordinated urban planning and housing management. The contradiction between oversupply of (mostly high-end) properties and young people not able to afford to own a house must be dealt with. A rental market that protects the owners and the tenants should be developed by the state government.

Perling and greater Johor Bahru require better urban planning that protects the environment and climate, as well as pre-empting and mitigating floods, as well handling reclamation of lands with utmost care.

Some people do not know that Johor Bahru downtown is also part of the Perling constituency. I have been passionate about the revival of inner cities. Heritage buildings are charming if given the right spruce up and a new purpose. The state government and local authorities can collaborate more with owners and other stakeholders to revive the downtown. Cultural heritage is our common treasure.

5. A better relationship between Putrajaya and Johor State Government

While Putrajaya controls all the powers, it doesn’t necessarily understand the needs of Johor. The bureaucracy in Putrajaya often hinders the potentials of Johor to grow and thrive. Greater Johor Bahru is one of the nation’s main metropolitan areas. Central and northern Johor are the capitals for plantation, agriculture, and food security.

The interests of Johor were neglected under UMNO-Barisan Nasional administration because Johor UMNO was subservient to its political masters in Putrajaya.

A new and fairer federal-state relationship would entail the federal devolving powers of healthcare and education, as well as partial roles of economic development, to the Johor state government. These tasks could be paid for by having federal government sharing income taxes collected from within Johor with the state government.

A brighter future for Perling

For Perling voters, whether you or your family members or your friends, who are commuting daily or weekly in Singapore, I share your pain of having to endure stagnant wages against increasing prices.

Let us work this out together. With the five action plans as well as the need for continued services to the people, I humbly hope the voters of Perling and Johor will choose for the best, clean and caring government in this state election.