Who says UMNO is sure to form the next government? 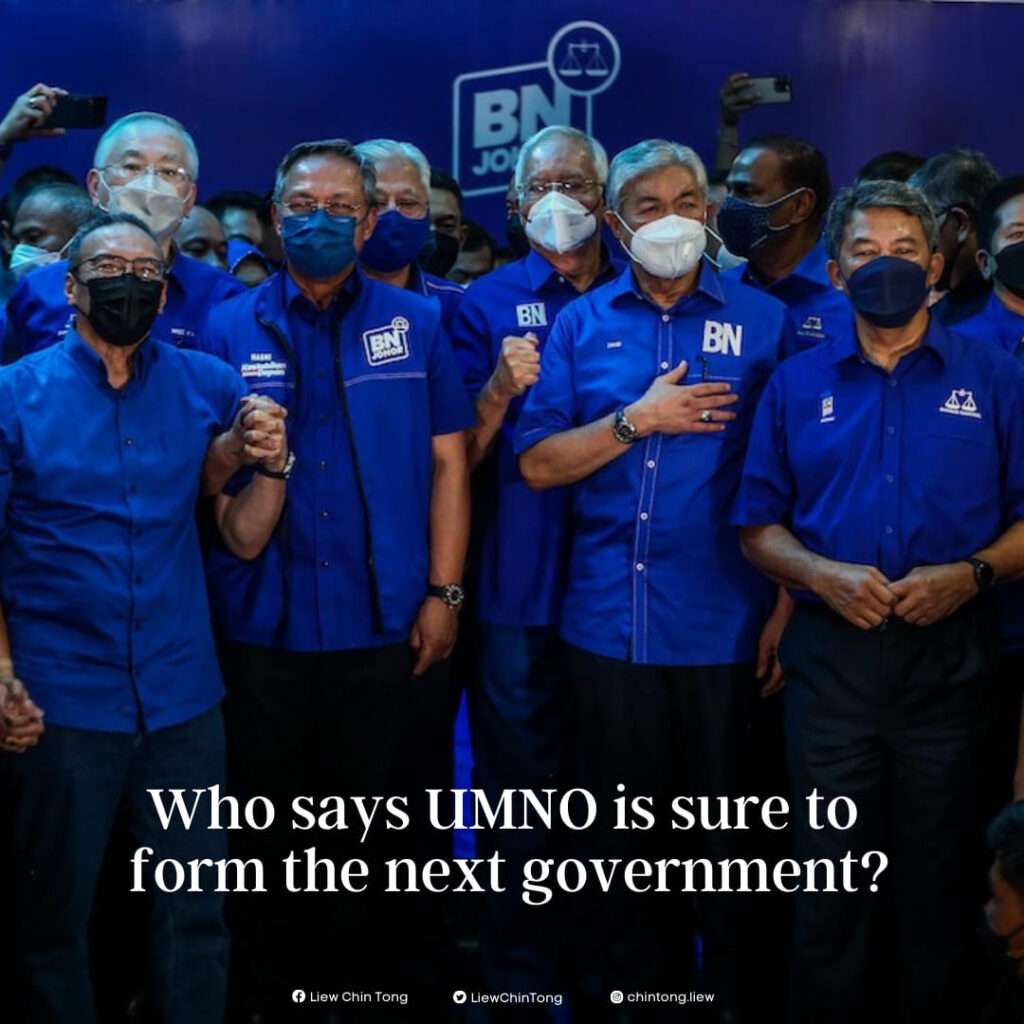 There has been a sense of hopelessness among many opposition leaders and supporters, and the wider Malaysian population. It is as if we are waiting for the inevitable, that UMNO, in its unreformed and unrepentant form led by the Court Cluster, in particular Dato’ Seri Najib Razak and Dato’ Seri Zahid Hamidi, is going to win the next general election on its terms.

The Court Cluster had succeeded in setting the pace, tone, and agenda as soon as UMNO-Barisan Nasional lost the 14th General Election. Instead of remorse and reform, UMNO decided in its June 2018 party election to keep to the status quo led by Zahid. UMNO then entered a marriage of convenience with PAS in October 2018, galvanising its ground through a UMNO-PAS joint mass protest against ICERD (International Convention on the Elimination of All Forms of Racial Discrimination) on 8 December 2018, before formalising their collaboration through the Muafakat Nasional coalition in October 2019.

UMNO and PAS inflamed the ground by accusing the Pakatan Harapan government, especially with DAP as part of the ruling coalition, as a threat to Islam while, on the other hand, non-Malays and non-Muslims were fed the idea that their identities and ways of life were under threat under the government led by Tun Dr Mahathir Mohamad.

The “scorched-earth” approach paid off when the Pakatan Harapan government fell in February 2020 through the Sheraton parliamentary coup, which UMNO enabled and empowered.

The Court Cluster went on to take down the Tan Sri Muhyiddin Yassin government in August 2021. Soon afterwards they engineered snap polls in Melaka and Johor, and won a landslide victory due to low voter turnout, political apathy and fatigue on the part of swing voters and Pakatan Harapan supporters.

As shown in the battle to remove Muhyiddin as Prime Minister, the Court Cluster had only 15 MPs on its side at the height of the crisis.

With less than 7% MPs out of a 222-seat parliament, the Court Cluster pulled off one of the greatest political heists and turnarounds by manipulating sentiments and cleavages of all of their opponents.

Now, the Court Cluster seems to be on its way to break out of jail. Efforts are made to force a general election in the next few months. The most talked about date is the date agreed to by Datuk Seri Ismail Sabri to not call for a dissolution as stipulated in the MOU between his government and Pakatan Harapan, which is this 31 July.

The 14th Parliament is only due for automatic dissolution on 16 July 2023.

Najib and Zahid will be the clear beneficiaries of an August or September 2022 general election. With Zahid still at helm in UMNO, he could decide on who would be UMNO candidates thus eliminating the internal opponents of the Court Cluster. Najib and Zahid hope UMNO and Barisan Nasional will win handsomely, and with the return of a BN government, they can finally walk free from prison.

The script of the Court Cluster is as clear as daylight. Yet, many of us still play into their hands – feeling hopeless and losing a sense of purpose.

Many seem to think that there is no way to stop snap polls as UMNO will coalesce around the Court Cluster leadership, and Ismail Sabri who appears to be weak will follow the instruction of the party.

Many also think that UMNO will win hands-down in the upcoming general election. Some in Pakatan Harapan even have a self-defeating thought that UMNO-BN would win not only the coming 15th but also the 16th general election.

How to stop the Court Cluster’s offensive

For Malaysians who don’t want to see the Court Cluster coming to power and possibly bringing the nation into a downward spiral, here are some points to keep in mind.

Second, all responsible political actors should work out legislative and administrative consensus of what constitutes fair play.

We are now in a situation where no one is fully dominating. For instance, UMNO’s arch rival Bersatu holds the powerful Home Ministry portfolio. While the Court Cluster may want to be the dominant party like before 2008, UMNO doesn’t have the command of all state apparatus anymore. Thus, a free and fair election is not just a concern for the opposition but all players including Bersatu, PAS, GPS, GRS and many others.

The point is politics is fluid.

Given the bad blood in the past, dwelling on whether or not Pakatan Harapan should work with Perikatan Nasional during the election gets us nowhere.

What is more important now is for all political forces against the Court Cluster, including UMNO leaders who do not want to see the return of Najib and Zahid, to work out a set of democratic rules that would be upheld regardless of the political fluidity, to ensure fair elections, and fair processes governing the formation of government on election night if no single party has an outright majority. Anti-party hopping law is one such rule but we don’t have to stop there. Such rules would benefit all contenders including Ismail Sabri who is now the ‘poster boy’ of UMNO but could be discarded anytime.

All political forces against the Court Cluster should talk, not about who to contest what seats in the general election, but about how to use the remaining time of this parliamentary term to set rules.

Indeed, all Malaysians who do not want the Court Cluster to make a comeback should talk to each other and work on a common agenda to strengthen the Malaysian democracy.

Third, who says UMNO is surely going to form the next government?

The Melaka and Johor state elections merely confirmed what we all know. UMNO-BN has a hardcore base of around 40% of the electorate, which is the same level of support in the 2018 general election, but a far cry from its previous heights.

In the 14th General Election, UMNO won only 47 seats in the peninsula and another 7 seats from Sabah, ie. a total of 54 seats out of 222. MCA won only one seat while MIC two.

If we just look at the 165 seats in the peninsula, UMNO-BN is only in a relatively comfortable position in about 70 seats.

If UMNO-BN can be kept at bay at 70 seats in the peninsula, it is far from a dominant position to lord over all parties in the political system despite being the leading coalition.

Even if UMNO-BN is at 85 out of 165 peninsula seats, there is no guarantee that the winners in Sabah and Sarawak seats would want to form a government with a fragile UMNO-BN coalition.

The winners of the Sabah and Sarawak seats would not blindly prop up the Court Cluster unless their demands for more devolution of powers are accepted. BN has never made any serious move on the matter except for lip service.

All is not lost. As long as all political actors realise that the nation could be plunged into further calamity when the Court Cluster leaders come back into power, there is still hope that some kind of democratic rules fair to all could be formulated, and the unreformed and unrepentant UMNO would not be allowed to set the pace, tone and agenda for the rest of Malaysia.