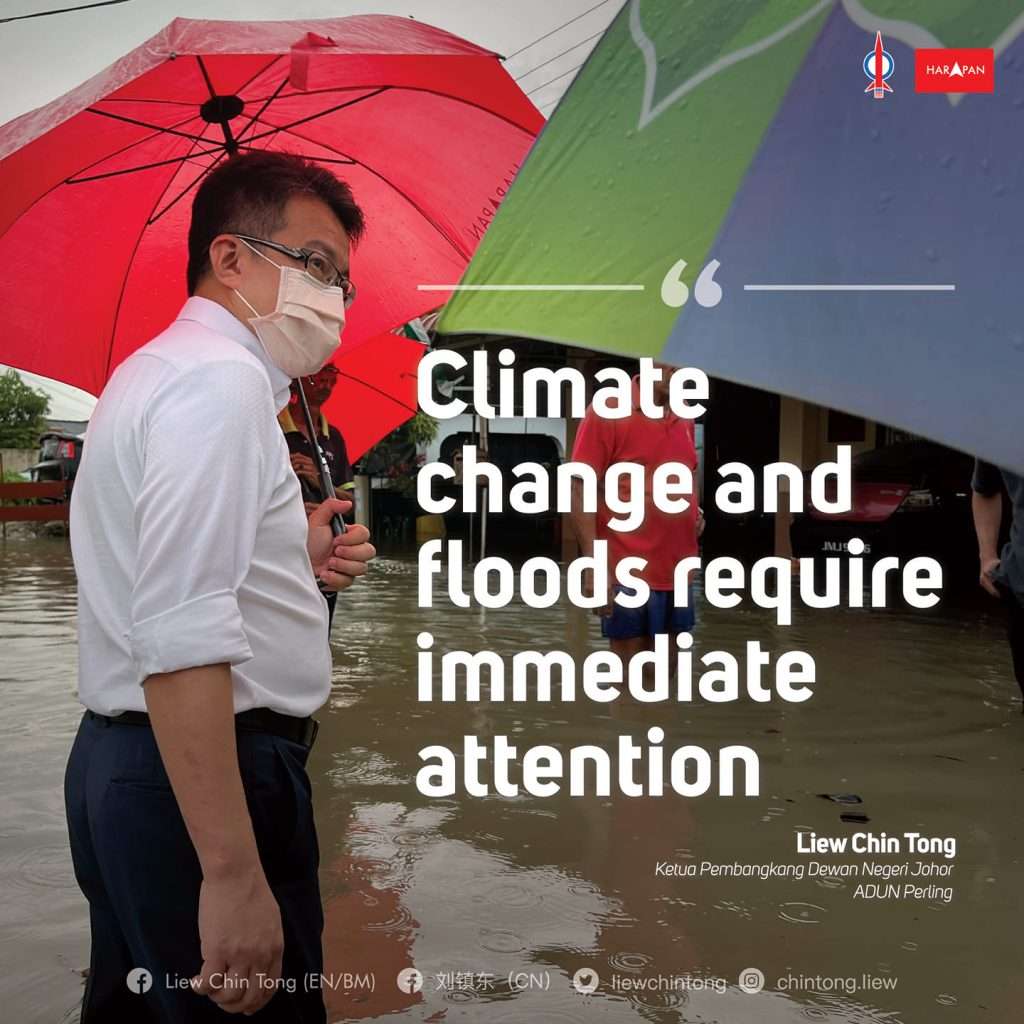 A few days ago, various parts of Johor Bahru were once again inundated with water.

Floods are not new but flash floods have become more regular and have caused greater damage. Their regular occurrence is both a manifestation of the effects of climate change and a reflection of our collective failure in flood mitigation.

As I mentioned in my statement yesterday, the Johor Opposition has proposed to the Menteri Besar, Datuk Onn Hafiz Ghazi, to form a bipartisan committee in Dewan Negeri Johor to look into “climate change, urban and rural planning”.

Since my election in March, I have been visiting places often affected by floods both in the seat of Perling and nearby constituencies.

It is clear to me that some floods are caused by poor urban planning. For instance, when the Evergreen housing estate in Taman Tampoi Indah was built in the 1990s, it was surrounded by greens. Many other housing and commercial projects were developed in surrounding areas in the past two decades but the authority has somehow neglected to link the drainage system at Evergreen to an outlet into the larger waterways, thus resulting in a closed water circulation within the drainage of the area only.

The cleanliness of our drainage system is a major concern. Flow in most of the drains is not optimised in part because of irresponsible citizens who litter and sediments that build up, and on the other hand, cleaning by the authorities is not done regularly as scheduled.

One problem that seems obvious but has not been dealt with is the concealed drainage system. To some people, it is as if concealed drains can be conveniently overlooked even if they are filled with garbage and sediments, as they go unnoticed and hidden beneath the covers.

I have also visited urban villages such as Kampung Pasir which have no proper drainage system and some of its nearby rivers filled with garbage. These villages should not be neglected and left to their own devices. Flood mitigation in these villages will also reduce the risk of flooding in surrounding urban areas.

The Johor State Government, the local authorities and the federal agencies such as the Department of Irrigation and Drainage (JPS) and the Department of Environment (DOE) must work together to ensure that our drainage system and waterways are well planned, regularly cleaned and well maintained.

The Johor State Government must also lead both the public and the government agencies across the board to see climate change as a major challenge, have a clear plan to mitigate floods, and to make our cities and communities resilient to potential disasters.

In this regard, the Johor Opposition is ready to reach bipartisan consensus and build public support for climate change mitigation and flood mitigation programmes.