A New Deal for Malaysian federalism 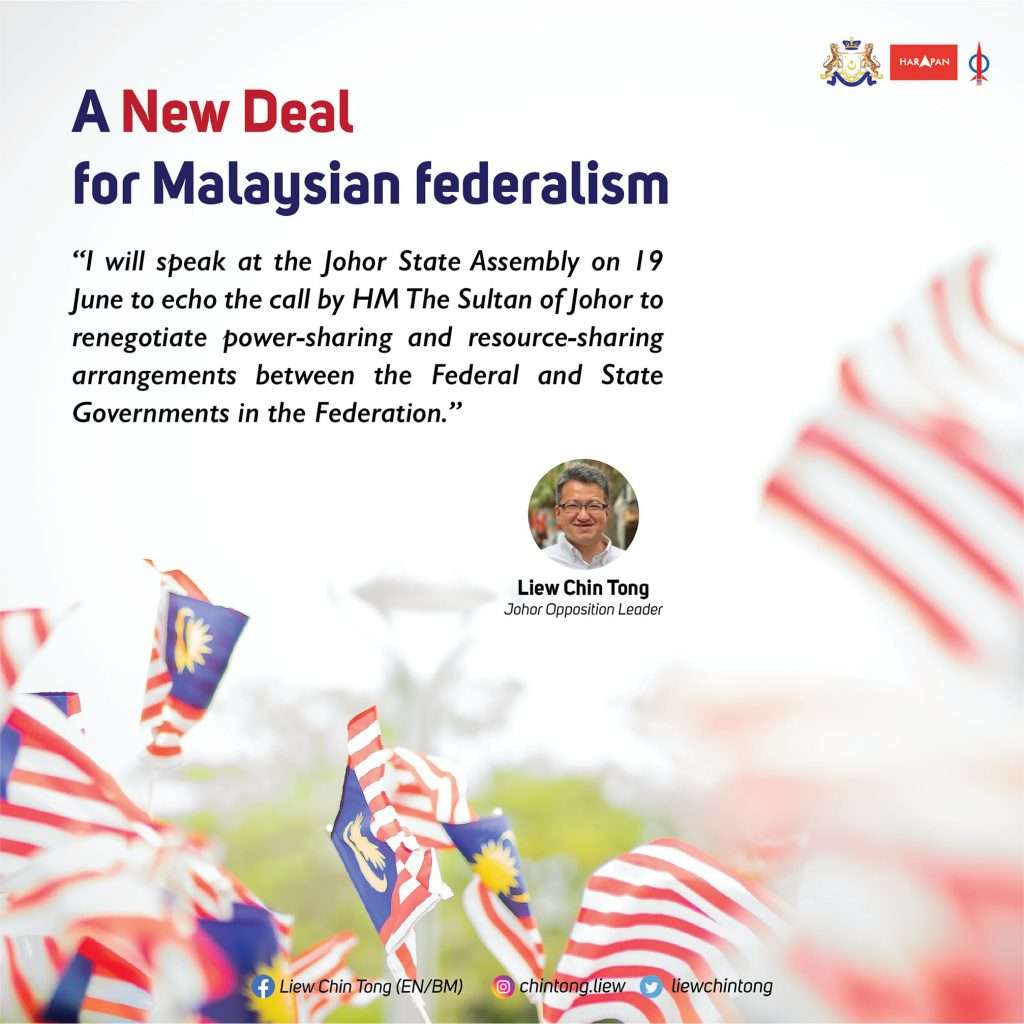 Now is the time. From Sabah, Sarawak, Penang, and now Johor, states are dissatisfied with the concentration of power and resources in the hands of the Federal Government, and the resultant lack of economic and infrastructural development.

In the Royal Address to the Johor State Assembly yesterday, DYMM Sultan of Johor Sultan Ibrahim Ibni Almarhum Sultan Iskandar detailed a litany of failed promises and outright failures by the Federal Government, such as pothole-ridden federal roads, poor amenities at the state’s public hospitals, and the sorry state of the CIQ (Customs, Immigration and Quarantine) complex.

HM The Sultan thundered that the State of Johor shouldn’t be “dianaktirikan” or treated as a stepchild.

The Sultan of Johor’s views have to be taken seriously by the Federal Government and all Malaysians as HM has pointed out the deteriorating state of Malaysian federalism. Unfortunately, these problems are not unique to Johor.

Malaysia was established as a federation of states but it has now become a highly centralised polity.

1. Recently, the Sabah Law Society and Sabah Pakatan Harapan sued the Federal Government for not fulfilling the Constitutional provision of providing the state with 40% of revenue collected from Sabah;

3. The state governments of Penang and occasionally Kelantan have also complained that their respective states were treated like stepchildren due to political differences with the Federal Government.

When Malaysia was formed, income taxes were not as important a source of revenue as in current days. Providing the states with sole power to manage lands and natural resources was deemed a fair deal.

However, over the decades, the federal coffer expanded many folds due to the expansion of the modern economy, hence the collection of corporate and personal income taxes. And with the enlargement of federal collection revenue, the roles and responsibilities of the Federal Government swelled.

Politically, during the era of UMNO-Barisan Nasional one-party dominance, UMNO Menteri Besar or Chief Ministers were political appointees of the Prime Minister via his power as UMNO President and they were thus subservient to him, leading to the concentration of power in the hands of the Prime Minister.

The 14th General Election ended the UMNO-Barisan Nasional one-party state as well as Prime Ministerial supremacy, providing space for a New Deal to be negotiated.

The call by HM The Sultan of Johor for the Federal Government to treat the state of Johor better in terms of power-sharing and resource-sharing is timely and resonates with the sentiments among states that are in a similar predicament.

HM The Sultan of Johor stated that the Federal Government collected RM13 billion from the State of Johor but only a meager amount has been channeled back into the state.

In 2020, through the archaic mechanism of “per capita grant”, Johor received RM47.82 million of federal funds, and through “state roads maintenance grant”, Johor was given RM626.42 million. The total amount the Johor State Government received from the Federal Government in 2020 was RM888.97 million, a disproportionately small amount compared to the tax collected from the state.

It’s time for the Federal and State Governments to renegotiate, to create a Malaysian federalism that is more balanced and just, which will then contribute to the prosperity and wellbeing of ordinary Malaysians.

On 30 May, Penang Chief Minister Chow Kon Yeow proposed a Federal-State Relations Commission to be jointly formed by the Federal and State Governments to study devolution of power and resources to the states.

On behalf of the Johor Opposition, I have written to Menteri Besar of Johor, Datuk Onn Hafiz Ghazi on 19 May to propose the formation of a bipartisan State Assembly Select Committee on Rejuvenating Federalism and Empowering the States.

I will speak at the Johor State Assembly on Sunday, 19 June to echo the call by HM The Sultan of Johor to renegotiate power-sharing and resource-sharing arrangements between the Federal Government and the State Governments in the Federation.

I will recommend to the Johor State Government:

1. To initiate and support a bipartisan Johor State Assembly Resolution to call on the Federal Government to form a Federal-State Relations Commission to study the New Deal power-sharing and resource-sharing for Malaysian Federalism for the next 50 years. The Commission should release its report by the end of this year.

2. That the Menteri Besar of Johor lead the effort of all like-minded state governments to form an “All-States Collaboration Committee” to coordinate and set an agenda for the new power-sharing and resource-sharing between the Federal Government and the States. This will be a “coalition of the willing”. There is no need to wait until all states agree to join. The states which see the current federal-state relation as unfair should join hands to push for a New Deal.

3. That the Johor State Assembly form a bipartisan Select Committee to realize the call by HM The Sultan to rejuvenate federalism and empower the state.

It’s time for a New Deal between the Federal Government and the States. Johor deserves better. Malaysians deserve better.

Previous PostHow will interest rate hike by the Fed impact us ?
Next PostRental Housing