Just want to share why I am passionate about reading: 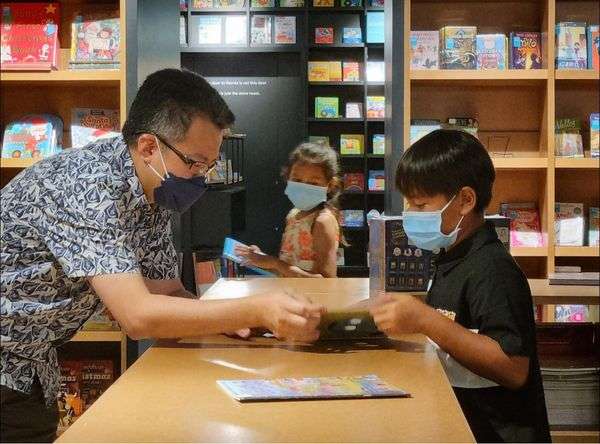 It was their first time visiting a bookstore. Some of them did not even have proper slippers nor shoes.

Our volunteers at #Perling have been conducting English lessons to these kids at Sungai Temon for the past four months.

We told the kids to choose whatever books they liked, as long as it was within the range of RM40 for each person.

I encouraged them to avoid repeating the titles so they can buy more variety of books and share among themselves as a group.

Eventually, everyone got their books.

We told the kids that they could write their name and the date on the books they chose, to mark a beginning.

Our English lessons and our outing to the bookstore are meticulously planned and well executed by our volunteers who genuinely believe in the cause.

I hope our small effort here can instill a sense of love for reading among the Orang Seletar children, who are the forgotten people in metropolitan Johor Bahru.

I am passionate about this thanks to my father.

I was 10 in 1987, and my parents were struggling financially. There was even once in that particular year that we did not have money to buy rice for a week.

But my father – an avid reader himself – did something amazing. He decided to give me RM30 every month to buy books. RM30 then was quite a sum for a family in financial difficulties.

For a decade, my dad supported me with RM30 almost every month to buy books, with some exceptions when he really couldn’t afford it. He never questioned my choices of books.

Reading opened up my world. This boy who didn’t come from a well-off family learnt about the world through the four books per month that he himself chose, and financed by his poor father.

I hope some of the kids whom we brought to the bookstore for the first time in their lives would have their horizons slightly widened, and, in the long run, their lives improved.