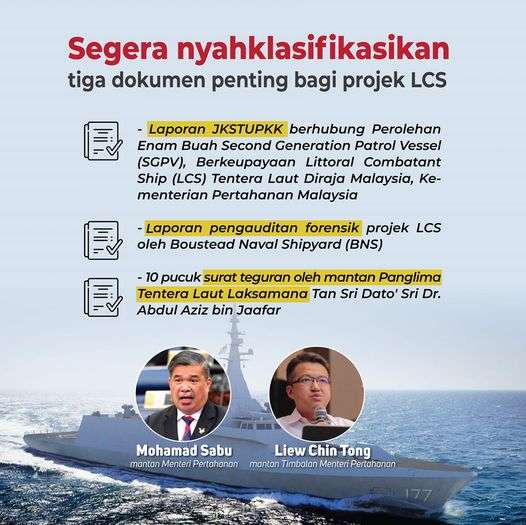 Since the release of the Public Accounts Committee report on the LCS scandal last Thursday, 4 August, people now have more questions than ever about what had happened in the case of LCS project mismanagement.

To find solutions and the way forward, we urge Minister of Defence Datuk Seri Hishammuddin Hussein and the government of Malaysia to decide at the Cabinet meeting this Wednesday to declassify the following documents for the nation to understand the problem.

Without the following documents being declassified, many questions will remain unanswered.

The Jawatankuasa Siasatan Tadbir Urus, Perolehan dan Kewangan Kerajaan (JKSTUPKK) was formed by the Pakatan Harapan Cabinet on 30 May 2018 at the request of Minister of Defence Mohamad Sabu.

This forensic report is crucial as it contains details of exactly who was culpable at the operational level.

For the sake of finding a solution for the multi-billion LCS scandal, the Cabinet meeting on Wednesday must agree to classify these letters and documents.

Previous PostJust want to share why I am passionate about reading:
Next PostA Tribute to Dr. Chen Man Hin (Part 1)